Permian Basin pure-play Concho Resources Inc. bumped up its growth outlook for production in 2019, but it kept its spending plans unchanged as it completed several major projects ahead of schedule. 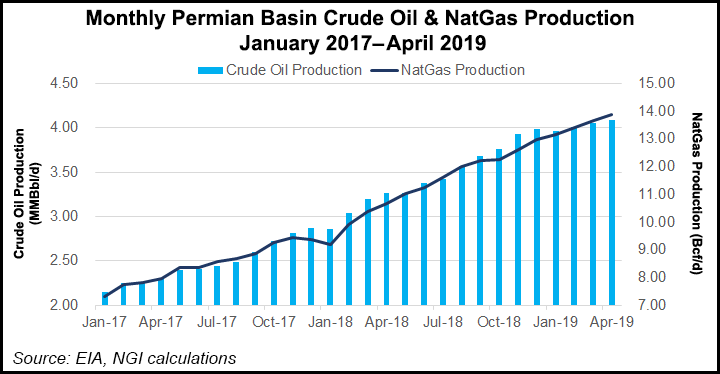 Concho also cited improved efficiencies and faster cycle times for completing several projects early in the Delaware and Midland sub-basins. The 23-well Dominator, 12-well Eider and six-well Jack projects in the Delaware each had first production start during the first quarter, and the 11-well Mabee and five-well Spanish Trail projects in the Midland were turned to sales.

Full-year capital expenditures (capex) for 2019 was unchanged at $2.8-3.0 billion. About 94% of the capex is earmarked for drilling and completion costs.

During an earnings call Wednesday, CEO Tim Leach hinted that the company could consider trading acreage.

“The Permian continues to dominate global activity and represents the most economic source of supply growth in the world,” Leach said. “Attention on the Permian…reinforces the importance of being low cost with high quality scale, but also validates the strategic rationale for the moves we made in 2018,” which included the RSP Permian Inc. acquisition and some strategic trades.

“Our business development asset teams are working on a new slate of trades as we continue to value owning large blocky tracks of operated acreage with high working interest…It’s not surprising to me that so much attention is focused on the Permian and consolidation in the basin.”

President Jack Harper said well completions in 2019 were proceeding according to plan. “We had more wells completed in the first quarter, and therefore we will have modestly less in the second quarter, but then picking back up in the third and fourth quarter,” Harper said. “That should help our guidance with the new fourth quarter number.”

Concho had an average of 33 rigs deployed during the first quarter, but it has since shed four with an average of eight completion crews. The rig count should be “in the low 20s by this summer,” said COO Will Giraud.

During the first quarter, Concho agreed to sell its stake in Oryx Southern Delaware Holdings LLC to Stonepeak Infrastructure Partners for $300 million. It also agreed to form a 50-50 midstream joint venture (JV) in the northern part of the Midland with Frontier Midstream Solutions IV LLC, Beta Crude Connector LLC.

Giraud said Concho continues to integrate the assets it acquired after taking over RSP.

“After a year of reflecting, I’m glad we did the deal we did,” he said. “It folded in really well and met all our objectives, but it also highlights how difficult it is to find anything like that in the Permian that doesn’t have a bunch of hair on it…What I think everyone is striving for is big blocky acreage and a team that can execute. That’s really difficult to put together.”