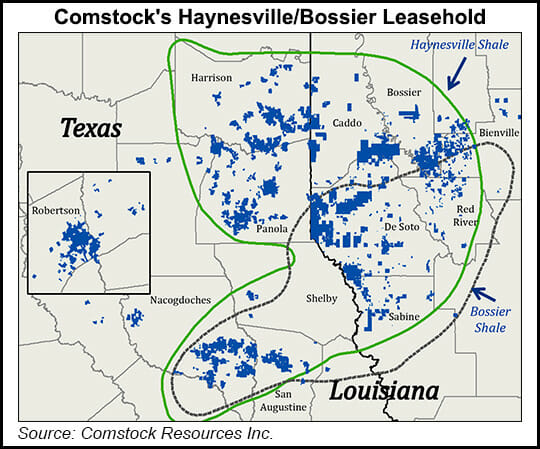 The Frisco, TX-based independent is partnering with MiQ to certify the gassy production. Under the MiQ Standard, the nonprofit would assess and grade the methane emissions intensity, ensure enhanced monitoring technology deployment and verify operating practices. Responsible Energy Solutions LLC is acting as the third-party auditor.

The certification would ensure the gas is “differentiated, responsibly sourced gas, based on methane intensity to both domestic and international markets.”

“What a great time to be in the natural gas business, especially in Haynesville,” he told investors during the 3Q2021 conference call.

The company now is a Haynesville pure-play after it agreed to exit the Bakken Shale last month. The goal is to accelerate the Haynesville well completions activity, with the Bakken proceeds “to bring those volumes forward,” Allusion said. “The current strong pricing environment for natural gas by the increased production from those wells…will appear in the first quarter of 2022.”

During the final three months, Comstock plans to accelerate drilling in the Haynesville, with  average output of 1.42-1.45 Bcfe/d, nearly 100% weighted to natural gas.

Comstock’s production rose by double-digits in the latest period even though 80 MMcf/d, or 5.8% of the natural gas production, was shut in.

“The shut-ins this quarter were mainly due to the really high level of completion activity that we have both for our own activity and offset operators,” CFO Roland Burns said. “That’s necessary in order to protect the older wells, when we fracture a new well nearby.”

Comstock drilled 11.7 net operated Haynesville wells during the third quarter. It also turned 22.4 net wells to sales. The company is running five operated rigs today, a level it expects to maintain through December.

Comstock was burned during the quarter after missing the direction of gas and oil prices. The company had 70% of its gas volumes hedged during the quarter, fetching a realized gas price of $2.90/Mcf, versus the $3.79/Mcf price for which the volumes were sold.

“For the remainder of the year, we have natural gas hedges covering 967 MMcf/d, which is about 70% of our expected production in the fourth quarter,” Burn said. “Around 58% of the hedges are price swaps and 42% are collars, which also gives us exposure to the higher prices.”

Comstock is required under its bank credit facility to achieve 50% hedging of its production, Burns noted. However, the requirement “is going to melt away as our leverage falls…So, as we achieve our leverage goals next year, we’ll no longer be required to hedge our volumes.”

Total revenue climbed to $511 million from $178 million. Natural gas sales accounted for nearly all of the sales at $488 million, versus $168 million a year earlier.