With a checkbook fattened by a recent Permian Basin asset sale, Comstock Resources is on the hunt for acreage in two emerging oil plays somewhere in its historic stomping grounds of Texas, Louisiana, Oklahoma and Mississippi. CEO Jay Allison is prepared to spend $120 million in two basins, but he’s not saying exactly where. 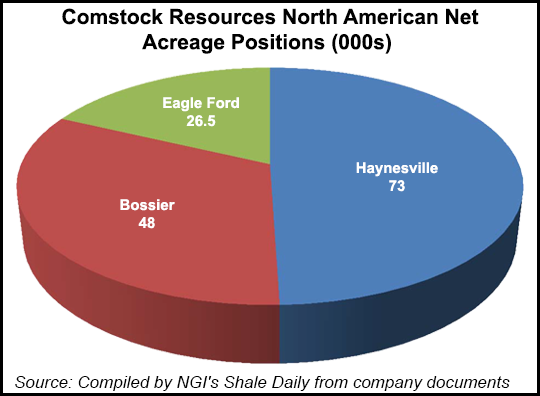 “We’re not going to spend $300 million, $400 million, $500 million chasing something,” Allison said during an earnings conference call Tuesday. “We’re going to spend $120 million. And we’ve found the two areas that we really like; we’re attempting to lease right now. And if anyone on the call asks if we’re in a particular play, we won’t comment on it because we’ve not publicized that we’re in any new play other than the Eagle Ford.”

In fact, Allison wants another Eagle Ford, circa early 2010. “We’re not looking to enter into a science experiment that will dilute the strong return currently being seen in the Eagle Ford but rather, invest in two areas, each of which we think has the potential to be another Eagle Ford.”

In March Comstock sold Rosetta Resources Inc. a package of Permian assets for $768 million, giving that company entry into the West Texas basin (see Shale Daily, July 31; March 18). With the sale, Comstock’s credit facility should increase to $1 billion while the company’s year-end oil production exceeds previous projects that included the Permian output, thanks to ramped-up drilling in the Eagle Ford.

“We expect oil to comprise 20% of 2013 production, even after the sale of our Permian Basin properties, and will grow to 40% by the end of next year; 96% of the net wells we’ll drill in 2013 will be oil wells, and 96% of our budget will be spent on oil projects,” Allison said. “We’re expanding our inventory of oil drilling locations by completing bolt-on acreage acquisitions around our Eagle Ford properties and by acquiring acreage in emerging oil plays.”

Further, Comstock still has its Haynesville Shale acreage, to which its attention won’t return until gas prices get to $4.30-4.50 or above, Allison said.

As for the Eagle Ford hunt, Allison told analysts Comstock is looking for plays that look like the Eagle Ford did in early 2010. “We’re spending anywhere from $200 to $1,500 or so per acre…[I]n each of these plays, you’re going to have a minimum of 20,000-25,000 acres and maybe a maximum of 50,000 acres. And that’s kind of your $120 million,” he said of the purchase targets. “We never said that we’re going to be like Rip Van Winkle and go to sleep and not acquire acreage because we acquire acreage.

Comstock has 73,000 net acres in the Haynesville, along with 48,000 acres in the Bossier and 26,500 in the Eagle Ford, according to company documents.