Haynesville Shale pure-play Comstock Resources Inc. scored in the third quarter, lifted by strong natural gas prices and by selling 15% of output directly to LNG shippers on the Gulf Coast. 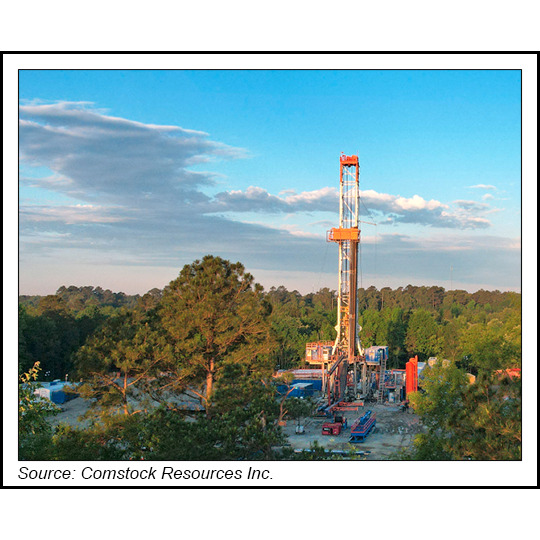 The company “posted the greatest quarterly results in our 30-plus-year history as a public company, with our revenues almost exclusively coming from selling natural gas,” he told analysts.

Revenues after hedging came in at $692 million during 3Q2022, which was 76% higher year/year. Regional basis is mostly fixed under long-term contracts, with 15-20% of sales subject to Perryville or Carthage basis differentials.

“During this third quarter, we nominated 77% of our gas to be sold at index prices tied to that contract settlement price…And then we sold 23% of our gas in the daily spot market. So the expected Nymex reference price for sales to the third quarter would have been $8.14.

“Our realized gas price during the third quarter averaged $7.72, which reflects a 42-cent differential that was a little higher than normal due to wider regional differentials and due most significantly to weaker Houston Ship Channel prices,” Burns said. “Houston Ship Channel and other Texas markets are usually sort of our premium markets. In the third quarter, we were also 49% hedged, which reduced our realize gas price to $5.36 cents.”

Comstock used some of its excess transportation in the Haynesville “to buy and resell third-party natural gas” during the quarter, which “generated about $11 million of additional income in the quarter,” Burns said. The sales added about 9 cents to the average price realization in the quarter.

“I think our marketing group is ahead of our drilling schedule,” Allison said. “Even though we think that the takeaway is friendly,” moving 90-95% of gas overall, “if you plan, you’re not going to run into some of the problems that some of the smaller companies have.”

“It’s not like we’re in one or two counties in Texas or six or seven parishes in Louisiana,” he said. Comstock plans out its program so that it may “heavily drill in one area and not another because of the takeaway issues,” Allison said. “But because we do have that 400,000-plus acres and we’re growing, we’ve got a lot of room to avoid some of the…takeaway issues.”

Comstock recently added about 300 MMcf/d of takeaway to its transportation portfolio, Burns said. “As we continue to look ahead and see where our needs are, there are a lot of greenfield projects in the Haynesville, especially redirecting gas to the Gulf Coast markets.”

The executive team now is preparing the 2023 capital budget. Allison said, “we’ll definitely be looking at the strength of gas prices to determine our activity levels and looking at where we have takeaway. We don’t drill wells that we don’t think we have good markets for…

“I think one of our big initiatives at Comstock is really to start to build up long-term supply contracts where we’re going to be looking to lock in direct customers and really stabilize the markets for our gas and the future, given our connectivity to a lot of the industrial users and LNG facilities.

“That’s kind of how we’re looking to position the company in the future…and not rely on the day-to-day market or the clearing market, but more to have a much better outlook…We know our customers. We want this gas to supply them on a long-term basis.”

Beyond LNG markets, Comstock is “now looking at some end users for chemicals or industrial users that may want to contract to buy our gas so they have it,” Allison said.

Once LNG export demand “matures by 2026,” Comstock will be marketing to “some of the end users locally along the Gulf Coast. They’ll have gas provided by someone…We’re very predictable with our 1,600-plus locations of the very high margins, low cost. We have predictability. And again, we just like the leverage we have…All the earmarks for LNG exposure when it appears, and we’re ready for it.”

Inflation added to operating costs, which climbed sequentially by 8 cents to average 82 cents/Mcfe. Gathering costs rose by 5 cents from 2Q2022, “primarily due to the impact of higher fuel costs used in the transportation of our gas, but also due to higher production from some of our higher gathering rate areas,” Burns said.

“This currently puts us over 1,000 feet longer than last year’s 8,800-foot average lateral,” he said. “By the end of the year, we anticipate our full-year average to be approximately 10,100 feet.”

“The increase in our drilling costs reflects the true cost inflation numbers we have experienced year-to-date,” Harrison said. “We have seen it affect all services across the space…”

The advantage in costs for completions is Comstock’s first natural gas-powered fracturing fleet. “It is playing a significant role in keeping our costs down,” Harrison said. “Locking in long-term costs for horsepower also is drastically cutting our diesel usage,” he said.

Comstock has contracted for a second natural gas-powered fracture fleet, which it expects to begin using early next year.