Buoyed by solid demand and strong prices, Comstock Resources Inc. said it ramped up activity in the Haynesville Shale and grew its proved reserves of primarily natural gas by 9% in 2021. 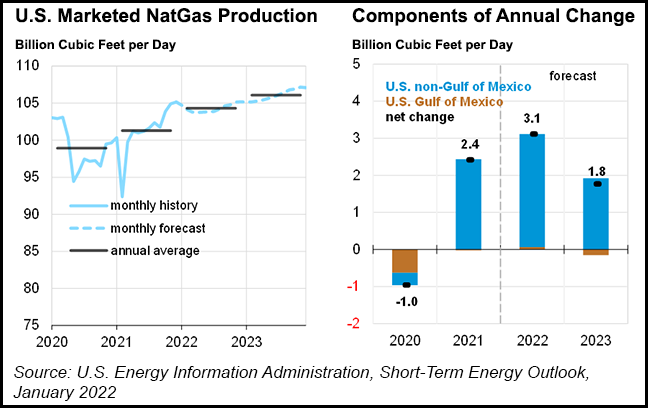 The Frisco, TX-based independent estimated reserves of 6.12 Tcfe at the close of last year, up from 5.63 Tcfe a year earlier. Of those reserves, 37% were developed and 98% were company operated, it said. Natural gas accounted for about 98% of the total reserves.

The producer is focused on developing the Haynesville in North Louisiana and East Texas.

Comstock said it spent $628.2 million in 2021 to drill 100 horizontal shale wells and to put 95 wells on production. The company also invested $21.8 million to acquire proved oil and gas properties and $35.9 million to acquire unproved leases in 2021.

The company contributed to a broader industry increase in 2021 as producers increased activity alongside Henry Hub prices, which advanced more than 40% during the year. The U.S. Energy Information Administration (EIA) said production of dry natural gas averaged an estimated 93.5 Bcf/d in 2021, up 2.0 Bcf/d from 2020. It topped 96 Bcf at points late last year.

EIA forecast average production will increase by 2.5 Bcf/d in 2022. Growth is expected to be “led by the Haynesville region, where production tends to be sensitive to change in U.S. benchmark Henry Hub natural gas prices, and by the Permian Basin, where production tends to be more sensitive to oil prices,” EIA researchers said, noting that benchmark crude prices recently touched multi-year highs. “In 2023, we expect dry natural gas production to increase by 1.5 Bcf/d to reach 97.6 Bcf/d.”

Comstock’s growth in the fourth quarter built on gains in the third quarter, when its total production climbed 25% year/year. After posting those results, CEO Jay Allison in November vowed to accelerate drilling in the Haynesville.

The company is scheduled to report fourth quarter earnings on Feb. 15.

For the third quarter, the company posted a net loss of $292.7 million (minus $1.26/share), compared with a 3Q2020 loss of $130.9 million (minus 57 cents). Hefty hedging losses drove the latest negative result. Total third quarter revenue, however, climbed to $511 million from $178 million. Natural gas sales accounted for nearly all of the sales at $488 million, versus $168 million a year earlier.