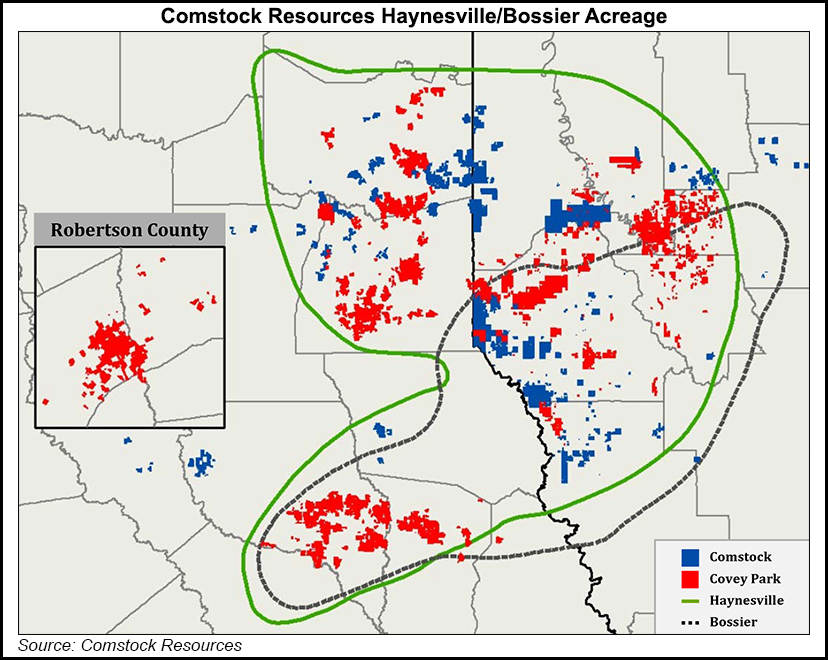 “We have advantaged access to the demand market of the Gulf Coast,” Allison said in a third quarter earnings call, as the Haynesville straddles North Louisiana and East Texas. With access to the Gulf Coast, there is the possibility the play could be a key supplier for liquefied natural gas (LNG) and pipeline exports.

“We need to lean into that market that we have,” he said. “You see LNG exports, I mean they are at an all-time high right now.”

Combined gas feed to the six U.S. LNG export terminals has been 10-10.4 Bcf/d each day since Oct. 31, according to NGI data, and some analysts forecast volumes to increase by another 1.5 Bcf/d in the coming weeks.

CFO Roland Burns said the strategy would add about $30 million to 2020 capital spending but management expects to eventually earn an additional $15 million by having more gas to market in the first quarter.

The company is operating six rigs; it added two in 3Q2020. A third hydraulic fracturing crew was added in early September. Plans are to maintain three crews through the end of the year, management said.

Comstock holds 309,000 net acres in the Haynesville and adjacent Bossier field, with a 91% operating interest.

The company had a “rocky” third quarter with a shut-in rate of 7%, compared to 4% in the second quarter, which was “partially self-inflicted” with curtailed activity in the first half of the year, Allison said. Comstock curtailed 12% of oil production in the quarter because of low prices.

Oil and gas sales totaled $212 million in the third quarter, down by 15% on the year.