The dry gas Haynesville Shale will have its day again — when gas prices have a $5 handle — and Comstock Resources Inc. will be ready, management of the Frisco, TX-based producer told financial analysts Tuesday. 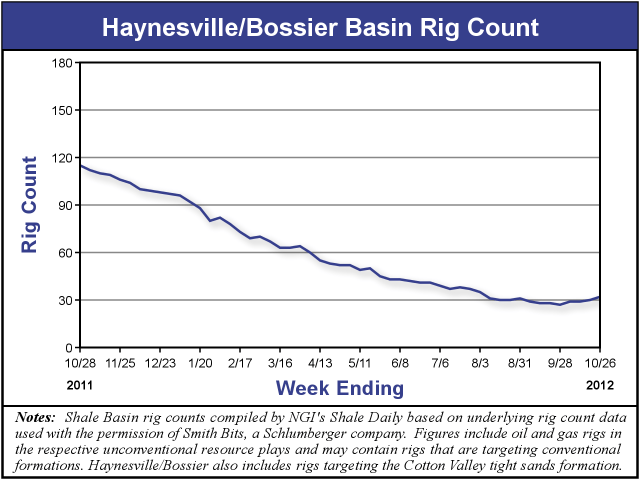 “The reason we were a really great natural gas company in ’08 is because we were in the Haynesville-Bossier,” said CEO M. Jay Allison. “We were 98% natural gas, unhedged, all the great things until you have a recession and a glut.”

Depressed gas prices have taken a toll on drilling in the Haynesville/Bossier, according to NGI‘s Shale Daily‘s Unconventional Rig Count for the week ending Oct. 26. While the 32 rigs operating in the play for the week marked an increase of two rigs, or 7% over the previous week, current levels are still down 83 rigs, or 72% from year ago levels.

“We don’t view [the Haynesville] as a divestiture candidate at all,” said CFO Roland Burns. “We think that’s our really good gas assets, and we want to be a balanced company, not just an oil company. That’s the area that we plan to grow our gas production in the future in the right price environment. We’re guarding our prime Haynesville acres. If there’s some fringe acreage, we might let some of that go over time if it’s nonoperated, but in general, we want to hang on to our core Haynesville…”

“We will be able to exploit our 7 Tcfe of Haynesville and Bossier resource potential in the future when improved gas prices provide economics competitive with our oil projects,” said COO Mark Williams.

In the meantime, Comstock is focusing its efforts and its cash on the Eagle Ford Shale and the Permian Basin.

“Despite the very low natural gas prices we experienced this year, we are on track to meeting our goal of establishing two high-quality oil drilling programs, which are transforming the company to a more balanced production mix and helping offset the low natural gas prices,” said Allison. “We expect oil to comprise 15-18% of 2012’s production, over 20% of production at the end of the year. Ninety-three percent of the net wells we’ll drill in 2012 will be oil wells, and 78% of our budget will be spent on oil projects.”

Oil production is expected to increase this year by nearly 200% compared to 2011, Allison said. In the Eagle Ford, well costs are coming down, particularly thanks to lower prices for well stimulation services. This, combined with the company’s joint venture with KKR (see Shale Daily, Aug. 1), made the Eagle Ford the company’s largest growth engine this year, Allison said.

Meanwhile, the vertical drilling program in the Wolfbone play in Reeves County, TX, “continues to be proven and profitable,” said Allison. “We have plans to reduce our well costs in this play and are working to create a successful horizontal program to drive up the rates of return in this area.”

Low gas prices continued to hurt the company’s financial results for the third quarter of 2012 as Comstock reported a net loss of $26 million (minus 56 cents/share) compared to net income of $1.3 million (3 cents/share) for the year-ago quarter.

Since the beginning of 2012, the company has completed 50 oil wells, including 27 vertical Wolfbone wells and one horizontal Wolfcamp shale well in West Texas, and 22 wells in the horizontal Eagle Ford Shale program in South Texas. The 22 Eagle Ford wells completed had an average per well initial production rate of 638 boe/d. The six new Eagle Ford wells reported on this quarter averaged 816 boe/d.

Since closing on the acquisition of acreage in Reeves County in West Texas, Comstock has drilled and completed 20 operated vertical Wolfbone wells and one horizontal Wolfcamp Shale well. These vertical wells were drilled to total depths of 11,250 to 12,786 feet and completed with five to 11 frack stages. The wells have an average per well initial production rate of 356 boe/d (79% oil).

Comstock has drilled its first horizontal well targeting the Wolfcamp Shale, and the results have been “very positive” with an initial production rate of 653 boe/d, the company said. The well was completed with 15 frack stages over a 3,627 foot lateral. Comstock’s second horizontal well targeting the Wolfcamp has reached total depth at 14,584 feet with a 3,428 foot lateral and is currently awaiting completion.