By building positions in the Eagle Ford Shale and the Permian Basin, Comstock Resources Inc. has been Texas two-stepping away from nearly all dry gas production to oil, but the dance hasn’t always been graceful, as fourth quarter results show. 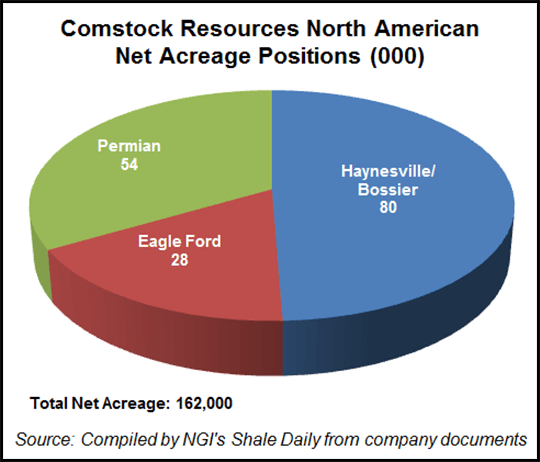 “…[O]ur goal this conference call is to get, quite frankly, 2012 behind us and it’s to continue to transition this company…away from this 98% natural gas platform we had, which at that time several years ago, that was a good platform. Today, it’s a horrible platform,” CEO Jay Allison said after discussing the company’s plans during a conference call Tuesday.

Comstock began the year with a partially proven play in the Eagle Ford and later added Reeves County acreage in the Permian as a new oil basin. “In 2013, the Eagle Ford will continue to be our largest oil growth engine, with a three-rig dedicated program to focus drilling into better portions of our Eagle Ford acreage,” Allison said.

Eagle Ford production during 2013 will be lumpy, said COO Mark Williams. Last year, completions per month varied widely from zero to six due to multi-well pad drilling and subsequent multi-well stimulation operations, he said. “The large variation will result in a lot of lumpiness in our resulting Eagle Ford production curve in 2013,” Williams said.

In West Texas, Comstock’s activity has been focused on Reeves County and properties the company acquired targeting the Delaware Basin from Eagle Oil & Gas at the end of 2011 (see Daily GPI, Dec. 8, 2011).

“The Reeves County acreage provides us over 900 vertical locations, targeting the Wolfbone with 178 million boe of resource potential,” Williams said. “We have a proven and successful vertical program on our acreage, but we think there’s significant upside with horizontal development in the Avalon, the Bone Spring and the Wolfcamp formations on our Reeves County acreage.”

“Our Gaucho well is testing the Wolfcamp A, which has seen the most success by other operators in Reeves County. Our Monroe well tested the Wolfcamp B, which has been moderately successful. And as I said before, the Dale Evans, which was not successful, tested the middle Wolfcamp Shale. The horizontal aspect of this play is still emerging, so there is much science to be applied before it can be verified, but we are very excited to have such a prime position in this basin.”

Comstock is dialing down spending in the Haynesville/Bossier play significantly this year. The company has 6 Tcfe of upside, Allison said, and has allocated $32 million to drill 3.6 net wells versus the $107 million it spent in the play last year.

“…[W]e are able now to inventory our Haynesville gas region [see Shale Daily, Nov. 1, 2012], and we’ll spend our money this year developing our two tier-one oil basins: the Eagle Ford and the Permian,” Allison said. “…So in 2013, 94% of the net wells drilled will be oil wells and 92% of our budget will be spent on oil projects.”

Comstock also plans to delver its balance sheet through a JV in the Permian, Allison said, allowing Comstock to develop the Permian “on a more consistent scale,” with both vertical and horizontal wells. “We intentionally levered up the company in order to add the two oil basins, and we did bring in a perfect JV partner in the Eagle Ford.”

The company’s recent rough ride is part of its transition to becoming an oil company, Allison said.

“We’re going to kind of hunker down, drill these Wolfcamp A wells…[T]he Permian is a very hot area right now,” he said. “We’ve had phone calls [from parties] asking what they could do with us in the Permian for prospective partners. So that’s a good thing. It’s a good thing to be in a nice, hot area where I think 20% of all the oil produced in the United States comes from the Permian, and that’s for a reason, and we’re right in the middle of it.”