The management team for Comstock Resources Inc., the largest exploration and production (E&P) firm focused on the gassy Haynesville Shale, on Tuesday signaled it would consider taking stakes in a liquefied natural gas (LNG) export facility. 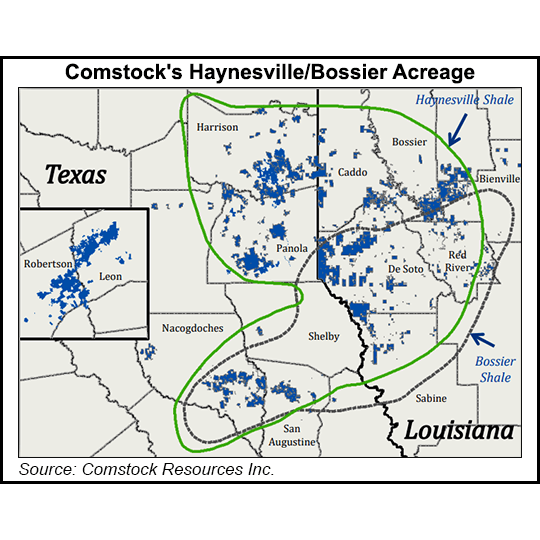 Comstock is “looking to develop long-term relationships with them and continue to tie more and more of our gas to the Gulf Coast indexes versus the regional hubs of Carthage and Perryville,” he said.

“But as far as participating in international pricing, I think that’s something we’re exploring, but I think you actually have to own the facilities,” said Burns. “Because you…physically need to be able to participate in that market to do that the right way, we don’t want to try to do that through derivatives and have unusual price changes cause us not to be correlated with our physical sales.”

With “equity in these facilities…then you would have the ability to use some of the capacity you own to maybe actually sell in the different markets,” he added.

Allison said LNG facility ownership was “the logical next step for us to look at as we have been looking at it.”

The Frisco, TX-based independent noted it also increased its 2022 drilling and completion (D&C) cost projection. Allison said the company is “experiencing cost increases for our drilling program this year given the high activity level in the Haynesville…”

“The cost increase is primarily due to the higher cost of services that have arisen during the first quarter, the sharp increase in commodity prices, and demand for services in the last couple of months,” said COO Dan Harrison.

“This is an 8% increase compared to our full year 2021 D&C cost and a 9% increase versus the fourth quarter of last year,” Harrison said. “Our drilling costs increased 13% in the quarter to $450 a foot, while our completion costs increased 5% up to $673 a foot.”

The company, which projects spending $225-275 million on D&C in 2Q2022, plans to drill more extra-long lateral wells of 11,000-plus feet in length “to play a key role in minimizing the impact of inflation,” he said. In 2022 “we anticipate drilling 24 extra-long laterals,” with 15 “exceeding 14,000 feet,” he said. Management views “these longer laterals as a means for us to further improve our efficiencies to alleviate some of these cost increases.”

“Our 2022 wells will have an average lateral length being approximately 16% longer than last year,” said Investor Relations chief Ronald Mills.

The company turned 15.2 net wells to sales in the first quarter, with a 29 MMcf/d average initial production rate for the 15 operated wells. It also participated in 14 nonoperated Haynesville wells. It expects to turn another 14 to sales during 2Q2022.

Production for 1Q2022 was 1.28 Bcf/d, nearly flat year/year. The output in the year-ago quarter included Bakken Shale acreage since divested. Haynesville output accounted for nearly all the production in 1Q2021 at 1.24 Bcf/d.

Harrison said “we’ve become less hedged every quarter and we’re participating more in the higher prices…And then in ‘23, we are participating almost fully in the futures prices.”