Management at U.S. independent Comstock Resources Inc., which has made its name as a Haynesville Shale natural gas giant, is increasingly bullish on the Bossier formation as part of its strategy. 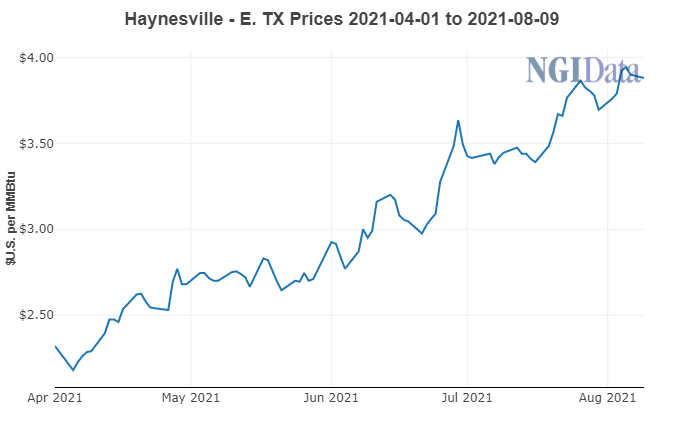 Of the 21 wells the Frisco, TX-based company turned to sales in 2Q2021, only two were Bossier wells, management said during the second quarter earnings call last week. Those two wells in Sabine Parish, LA, logged initial production rates of 31 MMcf/d and 32 MMcf/d, higher than any of the other wells.

Comstock is also planning to start drilling two Bossier wells in the coming weeks. Each of those would have 15,000-foot laterals.

“We’ve been thinking about that more long-term because we just have so many wells to drill,” Burns said. “It’s such a large inventory, it’s been hard to go to all the different plays. But it’s a great part of the inventory and I think the market’s starting to realize that. And some of the best wells in the play that are coming out of the Haynesville operators are Bossier wells now.”

Comstock reported quarterly production of 1.387 Bcfe/d, 98% natural gas. Output was 8% higher than the previous quarter and 6% higher than 2Q2020.

Comstock booked $343 million in 2Q2021 revenues from oil and gas sales as production and commodity prices rose. This  compared to $179 million in the same period in 2020.

Improved prices and higher production are also expected to help the company exceed its $200 million free cash flow (FCF) target for 2021. Management said FCF would be used to cut debt from the balance sheet.

About 70% of oil and gas production in the second half of the year is hedged. Burns said 41% of those hedges are collars, which are anticipated to give Comstock greater exposure to current high prices. About 40-45% of 2022 production is hedged, he added, with collars on about half of those hedges.