Comstock Resources Inc. has beefed up its Haynesville Shale inventory with the all-stock acquisition of an undisclosed operator, but going into 2020 it plans to run fewer rigs in the natural gas-heavy play. 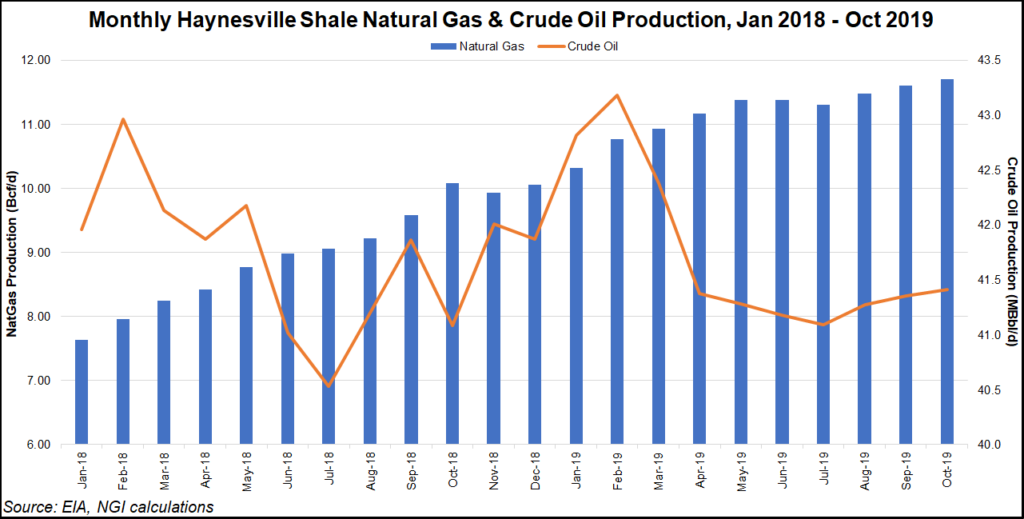 The privately-held producer’s properties, which Comstock acquired for $31 million, are mostly in DeSoto Parish, LA, including 20.1 net producing wells with output of 12 MMcfe/d and proved reserves are 89 Bcfe, CEO Jay Allison said during a conference call Thursday to discuss 3Q2019 results.

“The properties fit without existing properties,” Allison told analysts, with 11.7 net (36 gross) Haynesville-specific wells. “We have identified 44 gross or 12.7 net future drilling locations on the properties.”

For the deal, Comstock exchanged 4.5 million shares of common stock; the company early Friday was trading at around $7.43/share. The latest transaction follows the recent takeover of another Haynesville operator, Covey Park Energy LLC.

During the third quarter, the Frisco, TX-based independent produced 100.9 Bcfe total across its Lower 48 operating areas, which besides the Haynesville/Bossier formation also includes the Cotton Valley formation, Bakken Shale and Eagle Ford Shale.

Leading shareholder Jerry Jones, who owns the Dallas Cowboys, saw something in the company when he bought into Comstock, Allison told analysts.

“Over the last 21 months, our goal has been to be the low cost producer and have the highest margins at the same time right-sizing,” said the company chief. “The company has to be competitive in the new era of energy that we’re in. The corporate report…is a good marker to where 209 employees of Comstock have taken the company in a very short timeframe.”

“The energy sector needs this type of freshness in a company that focuses on less corporate overhead, zeros in on shareholders’ return and honors those that have provided financing.”

He said Jones, who owns 75% of Comstock, “continues to use his time, talent and money to continue to create the company…”

The combined production from Haynesville operations jumped 34% year/year, and the merger has “created a company with substantial scale in the Haynesville,” Allison noted. Now considered the largest Haynesville operator, Comstock has an estimated 5.4 Tcfe of proved reserves across 309,000 net acres in the play, which straddles East Texas and northern Louisiana.

“With the merger closed, we materially changed our leadership team with half our department heads coming from each company,” Allison said of the Comstock-Covey Park team. “Our department heads are selecting best practices from each company and have put together their teams with a focus on creating an efficient, low overhead company with favorable proximity to the Gulf Coast demand and over 500 miles of owned gas gathering infrastructure.

Comstock also has been lowering well costs in the Haynesville, with the latest well cost per lateral foot down 19% than the average at the end of 2018. Lateral lengths for new wells have been 5,450-11,361 feet, with average completed laterals of 9,343 feet. Each recent well was tested at rates of 19-32 MMcf/d.

However, in response to low natural gas prices, Comstock plans to reduce the operating rigs in 2020 to six from nine. Including hedges, the average realized natural gas price in 3Q2019 was $2.26/Mcf, while Comstock fetched on average $51.27/bbl for its oil.

The 2020 drilling program “will focus exclusively on the Haynesville Shale,” and preliminary plans are to drill 44.4 net wells in 2020 and complete 10.7 wells that were initially drilled this year. “The six-rig drilling program will support production growth of 6-8% over pro forma 2019 production and will generate substantial free cash flow.”

About $145 million is slated to be spent in 4Q2019 on development activities.

During 3Q2018, transactions were completed in which entities controlled by Jones contributed Bakken Shale properties in exchange for a controlling interest in Comstock.