Comstock Resources Inc. plans to spend $450 million on drilling and completions next year in its core South Texas Eagle Ford play, as well as it’s emerging East Texas Eagle Ford and in the Tuscaloosa Marine Shale (TMS). All drill bits will be pointed at oil with no gas wells planned, the company said. 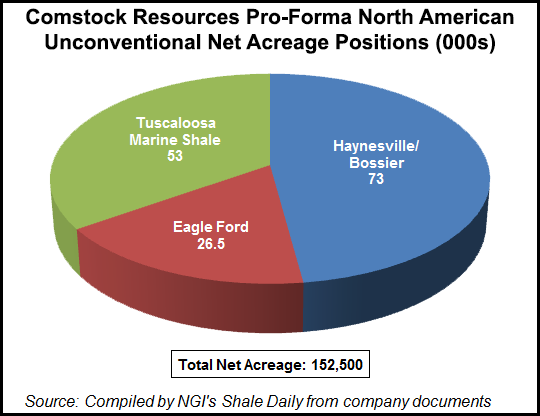 Next year’s five-rig program will further develop the Eagle Ford in South Texas and delineate acreage in East Texas and the TMS.

Comstock said the oil-focused drilling program will allow it to grow oil production in 2014 to 4.1-4.6 million bbl, which would represent a 75-95% growth over oil production from continuing operations in 2013. With no natural gas-focused drilling planned for 2014, gas production is expected to decline to 40-44 Bcf. If gas prices continue to improve in 2014, Comstock said it will consider restarting its drilling program in North Louisiana targeting the Haynesville and Bossier shales.

The company marked its entry into the TMS last month with the announcement that it would acquire 55,000 gross (53,000 net) leased acres in the play for $54.5 million (see Shale Daily, Nov. 15;Nov. 8). The TMS acreage is in East Feliciana and St. Helena parishes in Louisiana, and Amite and Wilkinson counties in Mississippi.