As one of the hottest growing hydrocarbon areas in North America, North Dakota’s legislature has been immersed this year with various proposals to deal with oil and natural gas-related issues. So far, the stakeholders embroiled in the debate are not sure which, if any, bills will make it through the legislative meat grinder.

Bills addressing tax changes and the flaring of associated gas at the wellhead are consuming most of the debate, keeping Ron Ness, president of the North Dakota Petroleum Council (NDPC), offering opposition in some cases and support in others.

Ness told lawmakers at a Senate Finance and Taxation Committee hearing that earlier attempts to simplify and restructure the state’s oil taxes have become more complex and costly with amendments tacked on through the legislative process, which ends May 1.

There are dueling House and Senate bills (HB1234 and SB 2336) attempting to do something about the 6.5% royalty tax paid on oil production, which continues to set all-time records each month (see Shale Daily, Feb. 19).

HB 1234 author Rep. Roscoe Streyle told local news media his bill’s intent is to simplify the tax code and encourage long-term oil development in the Bakken-Three Forks shale plays, but Ness said the industry would be better off with the current state tax policy.

SB 2336, authored by Sen. Dwight Cook, has passed the Senate and moved to the lower House. It would charge oil companies 9.5% on wells drilled after 2017, instead of the current 11.5%, in exchange for closing what the lawmaker says are loopholes used by oil companies. Current exemptions for stripper wells would be eliminated, providing an extra $50 million in previously lost revenue to the state.

Government and industry sources with a stake in the legislative debate told NGI’sShale Daily that SB 2336 likely will be the vehicle used to enact some oil/gas tax reform this session.

In regard to flaring and other issues, such as liquefied natural gas (LNG) development, a number of proposals are still being looked at, and a spokesperson for the NDPC said the industry can support or remain neutral on most of those bills, including HB 1134 (incentives for not flaring); HB 1410 (for the development of a BNSF Railway-proposed LNG facility) and SB 2370 (providing tax exemptions for new gas gathering systems). 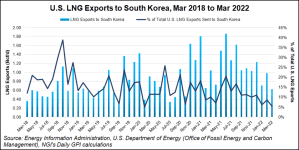 Korea Gas Corp., aka Kogas, is partnering with TotalEnergies under a tentative agreement to develop more liquefied natural gas (LNG) marketing and development opportunities. Under a memorandum of understanding (MOU), South Korea’s state-run Kogas and the French supermajor could cooperate on improving LNG and low-carbon energy trading to increase price stability for the country. Kogas…