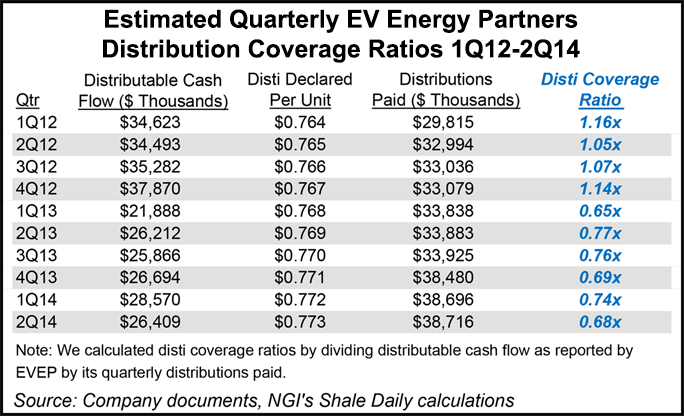 The setbacks have persisted since late last year, when mechanical issues caused by the cold plagued its programs (see Shale Daily, March 3). The partnership’s year-over-year production increased by just 2% in the second quarter to 174.9 MMcfe/d and was flat with first quarter volumes of 174.7 MMcfe/d (see Shale Daily, May 13).

“Operationally, we were negatively impacted in two areas. First, some delays were experienced in the completion of several Barnett wells. And second, delays in the drilling of some of our non-op wells in the the Mills Ranch area within our Midcontinent region,” said CEO Mark Houser. “These delays were somewhat offset by stronger performance in our other areas, including the Austin Chalk.”

The Barnett Shale accounts for more than 50% of the partnership’s overall volumes and the formation is also home to most of its natural gas and liquids reserves. EVEP drilled 34 Barnett wells by the end of the second quarter. It hopes to drill 73 by year’s end, Houser said.

The partnership’s Austin Chalk asset in South Texas progressed last quarter, where Houser said conventional drilling was robust. One well, the Dos Equis, in what EVEP calls its A zone program, recently came online at 700 b/d of oil and 1 MMcf/d of natural gas.

Given those results, the company also announced with its second quarter earnings that it had reached an agreement with an undisclosed buyer to sell some of its Eagle Ford assets in Burleson, Brazos and Grimes counties, TX, for $30 million in a deal that is expected to close in October. Executive Chairman John Walker said EVEP will retain its Eagle Ford and Austin Chalk rights in Lee, Fayette and Washington counties.

The proceeds from the Eagle Ford sales should give EVEP some additional cash to help fund its quarterly distribution (dividend), which has been a problem area for the company in recent months, said Patrick Rau, NGI’s director of Strategy & Research. EVEP’s distribution coverage ratio, which measures the ratio of distributable cash flow to actual distributions paid, has been significantly below 1.0x since the first quarter of 2013.

In Ohio’s Utica Shale, where EVEP has a joint venture with Chesapeake Energy Corp. and Total E&P USA Inc., volumes on its Cardinal gathering system have been running behind. Walker said that delayed connections and compression constraints kept average volumes at 630 MMcf/d, up from last quarter, but still off the 800 MMcf/d the partnership forecasts by year’s end.

Walker also said that Chesapeake tested its Parker well in the volatile oil window of Tuscarawas County, OH, with success, but he didn’t share any details. EVEP plans to drill its own operated test well in Tuscarawas in October, he added.

EVEP reported a second quarter net loss of $9 million, or minus 19 cents/share, compared to net income of $32.9 million, or 74 cents a share in the year-ago period. The loss stemmed mainly from non-cash impairments on commodity hedges, higher general expenses and exploration costs.