Because of production growth in U.S. oilfields, Calgary’s Suncor Energy has thrown in the towel on the centerpiece of its long-planned, $20 billion oilsands expansion, the Voyageur Upgrader. 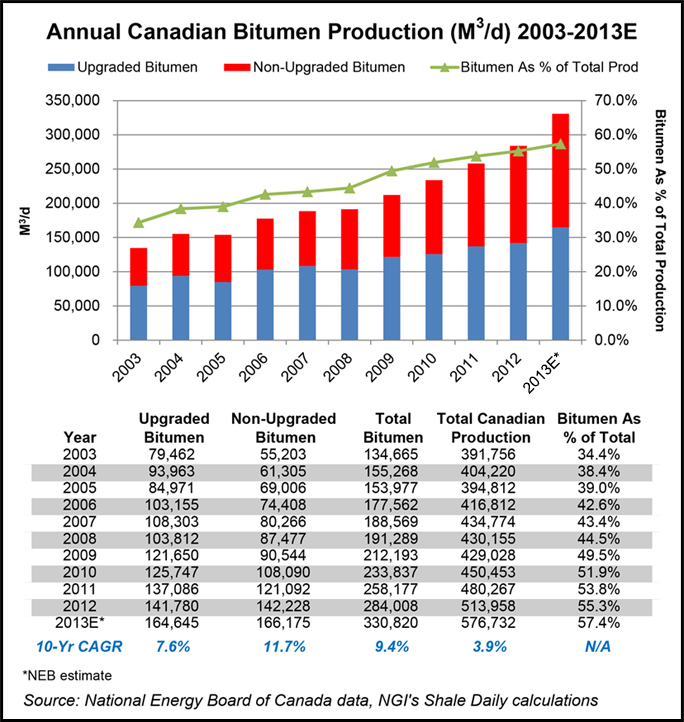 The producer and joint partner Total E&P Canada Ltd. had launched a strategic and economic review last year to determine whether to proceed. Suncor in early February said it was writing off $1.5 billion of its investment in Voyageur, a massive project whose completion has been stalled since 2009 (see Shale Daily, Feb. 8).

“Since 2010, market conditions have changed significantly, challenging the economics of the Voyageur upgrader project,” said Suncor CEO Steve Williams. “That’s why we undertook a thorough review of the project to determine whether it met our criteria for long-term, profitable growth.

“This decision is in line with our commitment to capital discipline and our stated plan to allocate capital with priority given to developing higher-return growth projects and accelerating the return of cash to shareholders through dividends and share buybacks.”

By not proceeding with the project, Suncor expects to incur a charge to 1Q2013 net income to operations of $140 million and to cash flow of $180 million.

Suncor also has acquired Total’s interest in the Voyageur Upgrader LLP for $515 million to gain full control over the partnerships’ assets, which Williams said would allow the company “to continue driving value from our base business and to support our profitable oilsands growth.”

“The shift away from constructing upgrading or refining facilities enables Alberta’s limited number of workers to be deployed on projects that augment heavy bitumen production, which results in more long-term jobs, government royalties and tax revenue,” said the “IHS CERA Oil Sands Dialogue.”

“Following the Great Recession, higher-than-average capital costs from a constrained labor market in Alberta and a narrowing of the price difference between light and heavy crudes have constrained investment in processing oilsands crude locally,” the study said.

The rapid growth of U.S. tight oil, which is a lighter form of crude, “has also reduced the demand for the already upgraded bitumen or SCO in North America, making the U.S. market more favorable to imports in the form of heavy oilsands crudes” that aren’t upgraded. Refinery capacity along the the U.S. Gulf Coast “is more attuned to those types of crudes” from the oilsands rather than lighter SCO.

“The current reality is that, in many cases, new value-added upgrading and refining investments in Alberta have challenging economics and investors do not get a reasonable return on the billions they must commit for a bitumen processing facility,” said IHS Senior Director Jackie Forrest, who heads the Dialogue. “Producers would be taking additional steps and spending more money to upgrade or refine oilsands, when the strongest demand is for non-upgraded products.”

Canada has seen the amount of bitumen it produces increase at a compound annual growth rate of 3.9% over the past decade, from 391,756 cubic meters/day (cm/d) in 2003 to 513,958 cm/d last year, according to National Energy Board of Canada data. Total bitumen production this year is forecast to reach 576,732 cm/d.

In addition, IHS found that shifting away from new oilsands downstream processing facilities in Alberta offers a potential benefit for labor, which otherwise would be devoted to constructing bitumen facilities. According to the findings, the economic benefits of increased oilsands production over new upgrading and refining facilities include more direct long-term jobs for facilities of comparable sizes; government royalties, since upgraders don’t generate any; and income taxes, because upgraders may struggle to generate positive cash flow.

“By devoting additional resources to build up bitumen production now, Alberta is not closing the door to bitumen processing in the future should circumstances change,” the study said.

“If the future unfolds differently than expected and the economics for value-added investments strengthen, the option will always remain to upgrade and refine then,” Forrest said.