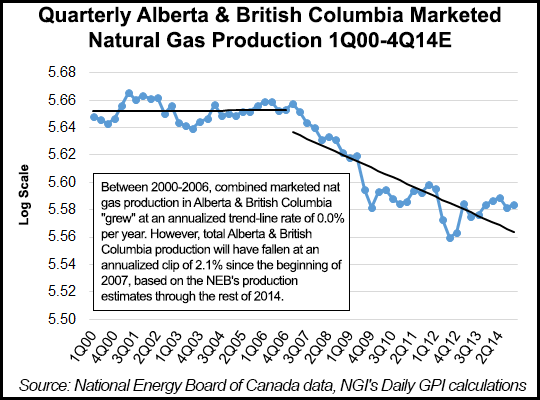 One of the two project managers continues to voice doubts that both Oregon LNG’s project at Warrenton, OR, at the mouth of the Columbia River, and the Jordan Cove project along the south-central Oregon coast at Coos Bay can both get built.

There are legitimate questions about the extent of western Canadian and U.S. gas supplies available, let alone the pipeline infrastructure to support both projects.

“We believe that we are still ahead of Oregon LNG in the FERC process,” said Braddock, adding that he does not believe “there is room for two LNG projects in Oregon.”

In contrast, Oregon LNG Project Manager Peter Hansen said getting the U.S. Department of Energy OK for the export approval to non-FTA nations was “exactly as expected. The condition is simply that we need a FERC [Federal Energy Regulatory Commission] license in order to export, which is a non-issue since we will need a FERC license anyway in order for the project to proceed.”

Hansen said he expects to get a scheduling notice from FERC later this summer and to get a draft environmental impact statement (DEIS) near the end of this year.

A long-disputed local permit from county authorities for a right-of-way continues to be stalled (see Daily GPI, July 3), but Hansen is not worried about it.

“As far as Clatsop County is concerned, there is nothing new,” said Hansen, noting a further appeal by the county is still a possibility. “We continue to pursue our Coastal Zone Management Act Consistency determination, and as I have previously pointed out, the law provides for various ways of demonstrating consistency; getting a local permit is just one of those ways.”

For Jordan Cove, Braddock expects to get a DEIS from FERC this month, and a final EIS is due from FERC Feb. 27.