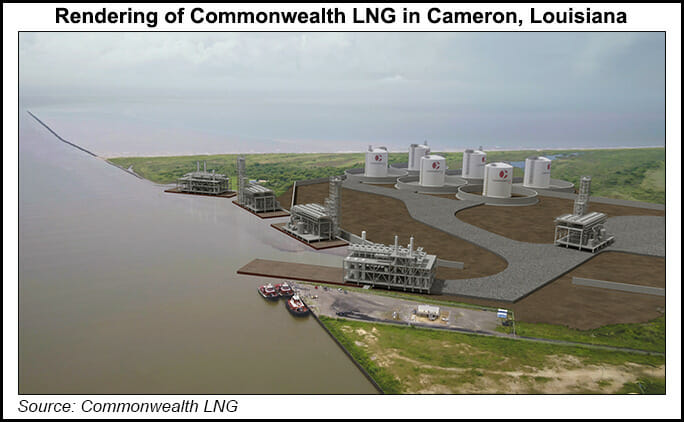 Australia’s Woodside could secure a contract for 20 years of the project’s lifespan if it follows through with the non-binding agreement. However, its offtake obligation can be reduced or eliminated as Commonwealth takes on more purchasers.

Woodside also could be entitled to purchase an additional 0.5 mmty of LNG in the future, if it chooses.

Houston-based Commonwealth LNG is aiming for its 8.4 mmty liquefaction and export terminal to start loading shipments at the mouth of the Gulf of Mexico by 2Q2026.

Any future purchase agreement hinges on a final investment decision by Commonwealth, which the company has previously indicated is expected sometime early this year.

Commonwealth CEO Paul Varello said Woodside’s track record as an industry lodestar for “keen technical oversight and commercial agility” would hopefully serve as a bid of confidence for the company’s strategy.

“This HOA is testament that Commonwealth’s approach to lowering the cost of LNG produced in the U.S. is gaining prominent support,” Varello said.

Woodside has been making large investments, including the sanctioning of the $12 billion Scarborough LNG project in November 2021 to fuel its own expansion of export facilities in Australia. The firm, however, is also looking for access to cost-effective supply across the global market.

Woodside CEO Meg O’Neill said the HOA secured access to “competitive LNG in the Atlantic Basin” that would allow the company to build “market scale,” with the bet that Commonwealth would be able to supply low-cost LNG in the long term.

Commonwealth netted its most significant offtake agreement in 2019 with a commitment from Gunvor Group Ltd. for 3 mmty. It also has scored a 1 mmty non-binding memorandum of understanding with Bangladesh importer Summit Oil and Shipping Co. Ltd.

Commonwealth previously has made moves to jumpstart its supply contracting process, launching a tender in January 2021 that offered offtaker flexibility with options to buy on a tolling, free-on-board or delivered-at-place basis.