Finding and repairing leaks, capturing natural gas from the completion of hydraulically fractured oil wells, and limiting emissions from new and modified pneumatic pumps and equipment used at transmission compressor stations would cut methane emissions as much as 400,000 short tons by 2025, the Environmental Protection Agency (EPA) said Tuesday. 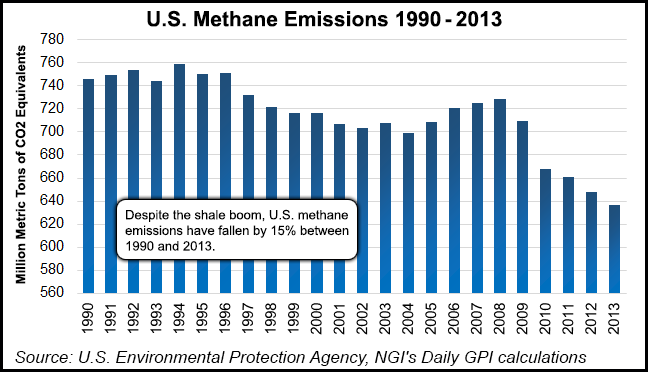 Those “commonsense measures,” proposed by EPA, would reduce up to 180,000 tons of ozone-forming volatile organic compounds (VOC) in 2025, along with 1,900 to 2,500 tons of air toxics, such as benzene, toluene, ethylbenzene and xylene, the agency said. The proposed rules would yield estimated net climate benefits of $120-150 million in 2025.

In January, the Obama administration released a plan to cut oil and natural gas industry methane emissions from new and modified sources 40-45% below 2012 levels by 2025 (see Daily GPI, Jan. 14). “These actions are completely in line with the president’s energy strategy, which clearly recognizes that domestic natural gas production provides abundant clean energy that powers and heat homes and businesses across the country,” said Janet McCabe, acting assistant administrator for EPA’s Office of Air and Radiation. “They also recognize that this valuable resource must be developed responsibly and safely.”

“Since 2005, natural gas producers have cut methane emissions 38%, while increasing production 35%,” said ANGA CEO Marty Durbin. “This impressive record has been accomplished through existing regulations and industry innovation. With further improvements certain to continue, we believe new and additional regulations are both unnecessary and counterproductive. This rule is simply not the best way to achieve our shared goal of methane emissions reductions.

“Natural gas producers will continue reducing methane emissions regardless of this proposal. Not only do we have an incentive to capture methane — it is the product we sell — but our track record of efficiency improvement and innovation are what drives the environmental, economic and energy security benefits of natural gas. A collaborative approach will bring greater reductions more quickly than new and unnecessary regulation.”

“EPA’s new proposal to regulate methane emissions is not only unnecessary, but another example of the administration’s punitive expansion of their war on fossil fuels. The oil and gas industry has proven success in reducing methane emissions on their own, even while increasing production levels significantly.”

The proposals “are red tape chasing industry innovations,” according to Kathleen Sgamma, vice president of government and public relations for the Western Energy Alliance.

“The problem with EPA making mandatory what industry is already doing is that it simply adds bureaucratic layers that remove flexibility and innovation while discouraging the development of the single most significant source of U.S. greenhouse gas reductions,” Sgamma said.

The Interstate Natural Gas Association of America said some aspects of the proposal would be costly and could diminish the reliability of interstate natural gas pipelines.

Environmental groups, on the other hand, welcomed EPA’s proposals.

“This is critical step toward protecting our climate and public health,” said Fred Krupp, president of Environmental Defense Fund (EDF). “EPA is taking on a pollutant responsible for 25% of the warming we are experiencing today. The nation’s oil and gas companies emit over seven million tons of methane pollution every year, equal to the greenhouse gas pollution of about 160 coal-fired power plants over the next twenty years. This proposal begins the important work of ensuring that the oil and gas industry reduces this pollution.”

According to EDF, voluntary programs have not worked, and national methane emissions have not been reduced as far and as fast as they need to be (see Shale Daily, Aug. 17).

The total amount of methane emitted from natural gas transmission and storage facilities in 2012 was 1,220-1,950 gigagrams/year (mean of 1,503 Gg/year), resulting in an estimated loss of 0.35% of the methane transported, according to an industry-backed study released last month (see Daily GPI, July 22).

That amount is not statistically different than was reported in the EPA’s 2012 Greenhouse Gas Inventory (GHGI), according to the study. The largest emission sources were fugitive emissions from certain compressor-related equipment and “super-emitter” facilities, according to the researchers.

In a separate study released Tuesday in the journal Environmental Science & Technology, some of the same researchers estimated total annual methane emissions of 2,421 Gg for all U.S. gathering and processing operations, with more than 90% of those emissions attributed to normal operation of gathering facilities, and the rest from gathering pipelines and processing plant maintenance and upsets. “The study results suggest that CH4 [methane] emissions from gathering are substantially higher than the current EPA GHGI estimate and are equivalent to 30% of the total net CH4 emissions in the natural gas systems GHGI,” the researchers said.

Mark Sutton, CEO of the Gas Processors Association (GPA), said he was encouraged that the study found lower emissions on the processing side than the GHGI, noting that EPA “recently proposed to expand its Greenhouse Gas Reporting Rule to include gathering and booster stations that would subject gathering and booster stations to new reporting criteria.”

The Obama administration first released a strategy to reduce methane emissions last year, giving oversight to the EPA and Department of Energy (see Daily GPI, March 28, 2014). The original plan called for the EPA to assess emissions from the oil and gas sector, while the Bureau of Land Management would update venting and flaring standards on public lands. In April 2014, the EPA released five technical papers on methane and volatile organic compound emissions from the oil and gas industry (see Daily GPI, April 15, 2014).

Tuesday’s proposals are among a number of actions that will help the nation reach the Obama administration’s goal of reducing the oil and gas sector’s methane emissions 40-45% by 2025.

“Looking at these proposals and the 2012 rules together…the reductions could be as high as 20-30% of the national estimated emissions of methane from this sector for 2012, which is the starting point for the methane strategy,” McCabe said.

EPA will take comment on methane proposals for 60 days after they are published in the Federal Register.