West Virginia’s economy has likely been in recession since mid-2015, with the deterioration of coal markets and waning natural gas development combining to slow economic activity, according to West Virginia University’s Mountain State Business Index (MSBI). 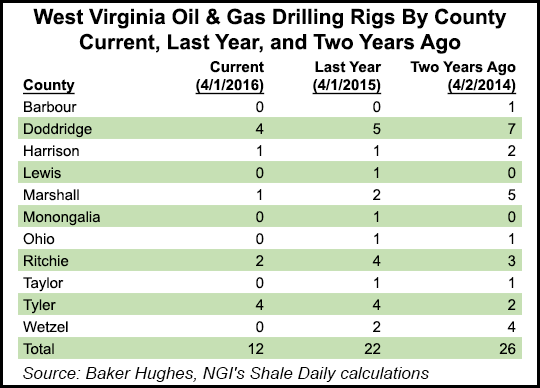 The gauge shows that the outlook will remain bleak through the end of the summer. Coal’s downturn has boosted unemployment claims, particularly in Southern West Virginia, and hit supporting industries. The oil and natural gas industry actually contributed positively to the index in March, but low oil and gas prices have cost the state jobs and created another level of uncertainty going forward.

“While the other half of the state’s energy sector is not enduring the same magnitude of decline, the skyrocketing growth in natural gas production has waned,” said Brian Lego, a researcher at WVU’s Bureau of Business and Economic Research, which produces the index. “A protracted period of extremely low prices has caused most oil and and gas companies operating in West Virginia and throughout the Appalachian Basin to idle rigs, slash capital investment plans and delay new exploration activity in the Marcellus and Utica shale plays.

“Initially, these pullbacks prompted job losses, but more recently have caused gas production to weaken as limited growth in output from new wells brought online during 2015 is being offset by declining withdrawals from legacy wells.”

The state’s unemployment rate was 6.5% in February, the latest period for which data is available, compared to the national average of 4.9% that month. The state has also long relied on its coal and natural gas severance taxes to balance its budget, but the downturn is now straining its finances. Overall severance tax collections rose about 2% through the first nine months of fiscal year 2015, but fell 31% through the final three months.

The state has projected that severance tax collections in FY 2016, which ends in July, could fall nearly $192 million short of projections. Lawmakers recently failed to pass a balanced budget as the state faces a $400 million deficit and state agencies have taken budget cuts, as well (see Shale Daily, March 15; Oct. 6, 2015).

“Preliminary data suggested West Virginia’s economy was quite weak throughout most of the calendar year in 2015, but failed to satisfy the thresholds used to signal a recession was indeed imminent,” Lego said. “However, subsequent revisions to the MSBI’s underlying indicators and continued worsening in several of the index’s components now point to the fact that West Virginia’s economy has experienced a sufficiently deep and broad-based enough drop in activity to suggest the state fell into recession territory by mid-2015.”

The seven indicators included in the report are related to building permits, unemployment claims, the value of the U.S. dollar, stock prices related to West Virginia employers, interest rates, coal production, and natural gas production. For March, three components made negative contributions to the overall index, led by a 3.1% month-to-month decline in coal production. Another three indicators made positive contributions to the index, including a sequential increase in natural gas production. The stock price component had no effect.

Combined conventional and unconventional natural gas production increased sharply from 2013 to 2014, the latest period for which data is available, going from 741.9 Bcf to 1.04 Tcf (seeShale Daily, March 9). Similar growth is expected through 2016 before the effects of the downturn catch up to the state numbers and begin to flatten production by 2017.

“We anticipate more volatility for the state’s natural gas producers to persist into 2017, with production changes remaining highly sensitive to small swings in regional spot prices,” Lego said. “Longer-term, however, prospects remain strong thanks to growing demand from the electric utility sector, the build-out of pipeline infrastructure throughout the mid-Atlantic region and the anticipated opening of [liquefied natural gas] export terminals.”