Hearings will be held Wednesday (Sept. 16) and Thursday (Sept. 17) with Department of Interior (DOI) Secretary Ken Salazar the lead-off witness. The bill, which circulated among committee members last spring in draft form, would expand on measures Rahall has introduced in the past to improve lease royalty collection practices and create incentives for producers to develop their leases (see Daily GPI, May 29).

Responding to a scandal that surfaced last year involving sex, drugs and financial/contract misconduct at high levels within the Minerals Management Service’s (MMS) royalty in kind (RIK) program, the measure would eliminate the royalty-in-kind program and move the audit and compliance functions of MMS to the DOI Inspector General’s Office (see Daily GPI, Nov. 24, 2008).

The CLEAR Act would consolidate the federal energy and mineral leasing programs within one bureau in the Department of the Interior (DOI), and establish the Office of Federal Energy and Minerals Leasing – combining the oil and gas, wind, wave and solar programs currently located in MMS and Bureau of Land Management (BLM).

Offshore leaseholders would be required to diligently develop their leases, using best management practices to ensure environmentally sound operations. The bill would raise onshore oil and gas rental rates for the first time since the 1980’s, assess a production incentive fee on existing leases that are not producing oil or gas, establish a competitive wind and solar leasing program for federal lands, and establish a leasing program for uranium, updating the rules for uranium mining that have been in place since 1872.

The measure would eliminate the practice of paying interest to oil and gas companies when they overpay royalties by accident, and “repeal unnecessary royalty relief provisions.”

The bill would create ocean councils for the Atlantic, Pacific, Gulf of Mexico, and Alaska regions, which would prepare marine spatial strategic plans to guide OCS energy development, although it specifies that existing activities would not be delayed while plans are being developed.

Ten percent of OCS revenues would go into a new Ocean Resources Conservation and Assistance (ORCA) Fund, which would be used to protect, maintain and restore ocean, coastal and Great Lakes ecosystems. Funding also would be provided for the Land and Water Conservation Fund, while state and local governments would receive funds for parks, trails, and other public recreation spaces and facilities. The bill also would provide assistance for large major restoration efforts in Chesapeake Bay, Puget Sound, the Everglades, the Great Lakes and others. 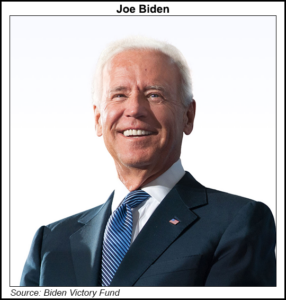 Democratic presidential candidate Joseph R. Biden Jr. on Tuesday afternoon unveiled a $2 trillion climate change and infrastructure plan dubbed “Build Back Better” that targets a carbon pollution-free power sector by 2035. The accelerated transformation of the electricity sector “represents the biggest job creation and economic opportunity engine of the 21st century,” according to the…