Cheryl LaFleur, who has served at FERC since 2010 and headed the Commission twice, and who had planned to step down as early as June 30, said Thursday she would remain at the agency 60 days longer. 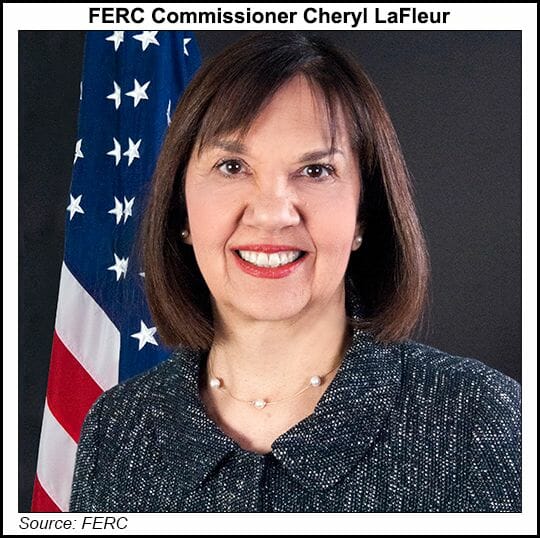 “After nine amazing years, I will be leaving FERC at the end of August,” LaFleur said in a Tweet. The Federal Energy Regulatory Commission’s open meeting scheduled for July 18 will be her last, she said.

LaFleur first announced her intention to leave FERC in January. At that time she said she would serve through the end of her term on June 30, “and probably longer, on my future plans and the possible appointment of a successor.”

“During her nine years of service, Commissioner LaFleur has been a source of wisdom and stability at FERC,” said Chairman Neil Chatterjee. “I will never forget the kindness she offered me when I came to the Commission. She and her staff did not hesitate to show me the lay of the land as I stepped into this new role…Though this is a loss to the FERC community, I look forward to watching her continued excellence wherever the next chapter takes her.”

LaFleur, a former executive vice president and acting CEO of National Grid USA, was nominated to FERC by President Obama in March 2010 and confirmed by the Senate two months later.

In November 2013, Obama named LaFleur to be acting chair of the agency, taking over after then-Chairman Jon Wellinghoff left FERC. In July 2014, LaFleur was confirmed to a second term. In an unusual move, she was named chairman and another Obama nominee, Norman Bay, was confirmed with the understanding that he would become chairman and LaFleur would become a commissioner in April 2015.

LaFleur answered the call once again in January 2017, when Bay resigned and President Trump named her acting chairman. Seven months later, Neil Chatterjee, another Trump nominee, was sworn in as chairman and LaFleur was again a commissioner.

“I appreciate Commissioner LaFleur’s thoughtful public service and wish her well in her next endeavor,” said Sen. Joe Manchin (D-WV). “FERC was designed as a five-member commission and I urge the administration to move quickly to nominate individuals to fill the two open seats simultaneously in a bipartisan manner. I look forward to reviewing the nominees that come before the Senate Energy and Natural Resources Committee so we can restore a fully functioning commission.”

FERC currently has four members — Chatterjee and Bernard McNamee, who are Republicans, and LaFleur and Richard Glick, who are Democrats. Commissioner and former Chairman Kevin J. McIntyre, who had been battling cancer since 2017, died Jan. 2.

The White House has given no indication of whom President Trump might nominate to replace McIntyre or Lafleur. By law, no more than three seats at FERC may be held by one political party.

Assuming no nominee is confirmed by the end of August, LaFleur’s departure would leave FERC with a 2-1 Republican majority and the slimmest of quorums.

Some key issues before FERC, including several pipeline projects, may be stalled because of potential 2-2 votes, according to ClearView Energy Partners analysts.

“Officially, the commissioners have played down the partisan divisions reported in the media, but the absence of action on those issues appears to do little to quash the theorizing,” ClearView said in a note Thursday. Action on those issues could materialize once the balance of power shifts to Chatterjee and McNamee.

Some natural gas and oil organizations have been anxious for the White House to nominate new commissioners.

“The lack of a full Commission can delay the approval of pending projects, such as natural gas infrastructure projects, thereby hindering the advancement of critical infrastructure,” members of the Natural Gas Council wrote in a letter sent to President Trump in April.