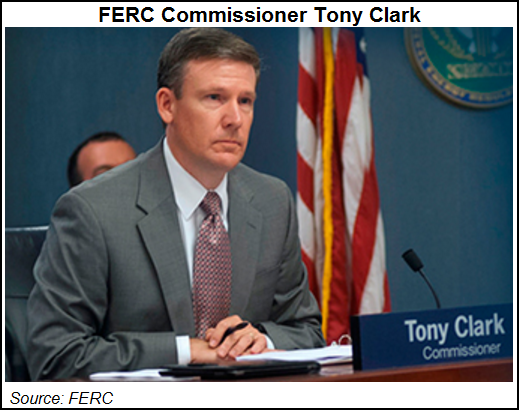 “After discussing it with my family over the holidays, we have decided not to seek another term on the Commission,” Clark said during the Federal Energy Regulatory Commission’s meeting in Washington, DC.

Clark, a former chairman of the North Dakota Public Service Commission (PSC), was nominated to FERC by President Obama and was sworn in to fill a Republican seat at the Commission in 2012 (see Daily GPI, June 18, 2012). Clark was nominated to serve the balance of the term that was vacated by former Commissioner Marc Spitzer. He is a past president of the National Association of Regulatory Utility Commissioners and served in the North Dakota House of Representatives from 1994 to 1997.

“I have enjoyed it a lot, but there comes a time when you just feel it is time to do something else,” Clark said. “I was elected to the state legislature when I’d just turned 23, so I’ve been in government a long time; I’m 44 now. But in the words of the immortal Monty Python, I’m not dead yet. The term runs through June, and then maybe a bit longer, depending on circumstances. I look forward to being around a while. I don’t have any immediate plans to leave the Commission, but I did want to give a heads up to folks who might be interested in perhaps seeking the seat, and to other parties and to my staff, for planning purposes. It’s a long process to get through nomination, confirmation [and] vetting, the whole thing. My case, which was a rather smooth nomination, took probably a year from when I started expressing interest and actually getting it through. So a little bit of heads up, I think, makes some sense. I thought I would announce today, rather than playing coy for the next six months or so.”

When he came to FERC, Clark said he would focus on manipulation and abuse in energy markets in order to create a more attractive investment climate for infrastructure developers (see Daily GPI, Dec. 3, 2012). He argued that states are better equipped to oversee the regulation of hydraulic fracturing than the federal government (see Shale Daily, May 1, 2013) and was involved in the Commission’s wrangling over jurisdictional overlap with the Commodity Futures Trading Commission (see Daily GPI, March 21, 2013).