Environmentalists and community activists have asked the California Energy Commission (CEC) to stop the permitting process that has dragged on for years for an on-again, off-again research/demonstration project that would usher in commercial carbon-capture-and-storage (CCS). 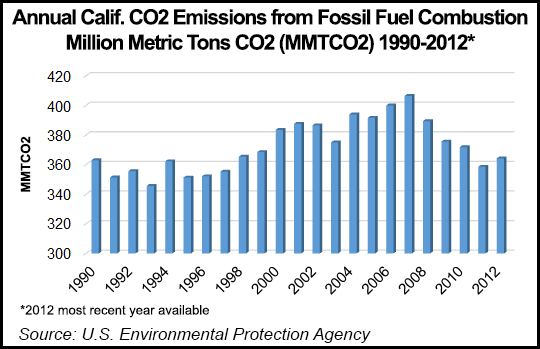 The CEC was asked earlier this year to terminate the project’s certification process by a local chapter of the Sierra Club and two residents’ groups in Kern County.

Opponents of the project recently cited the Obama administration’s cancellation of the decade-old, $1.68 billion showcase CCS project to retrofit a coal-fired power plant in Illinois (see Daily GPI, Feb. 4). The California project now appears to be facing the same fate if it is unable to meet a Department of Energy (DOE) deadline in September to qualify for funding of up to $408 million.

The California project originally was conceived more than five years ago through Hydrogen Energy California LLC (HECA), a consortium that had targeted 2015 for commercial start up (see Daily GPI, Feb. 29, 2009).

HECA has proposed using a 453-acre agricultural site in Kern County west of Bakersfield in the Central Valley to build a 300 MW facility that would gasify coal and petroleum coke to produce hydrogen-rich synthetic gas fuel for use in producing electricity and fertilizer. The project also would capture 90% of the carbon dioxide (CO2) produced and put it to use as part of enhanced oil recovery (EOR) in the nearby Elk Hills oilfield.

After the first failure by the consortium to kick start the project, even with state and DOE grants or promises of them, an ambitious multi-dimensional, $4 billion project was unveiled by SCS outlining the project (see Daily GPI, Feb. 12, 2013). SCS Energy California LLC is overseeing the project.

A CEC spokesperson confirmed that HECA is still the owner or the project, but it has not moved forward, pending negotiations with Oxy’s California spinoff, California Resources Corp. (CRC). Separately, a Los Angeles-based CRC spokesperson told NGI that CRC has had no discussions with HECA sponsors about participating in the project.

In its motion to the CEC March 2, the Sierra Club and allied groups argued that SCS “cannot obtain a contract to sell its CO2 to the adjacent Elk Hills oilfield,” which is controlled by CRC. “Without a CO2 contract, the project is financially and legally infeasible.” In addition, they said the project lacks “an acceptable water plan,” further making the project moot.

The carbon capture part of the project would require the involvement of CRC or another Central Valley oil and gas operator to provide a place and/or use for the captured CO2. The operator presumably could use the CO2 in its EOR programs.

The latest staff status report on the CEC website is nearly a year old and cites nonexistent “discussions” with Oxy about Elk Hills.