After posting a steep drop a week earlier, the U.S. oil and natural gas rig count mostly held steady for the week ended Friday, dropping one unit to fall to 990 rigs, according to data from Baker Hughes, a GE Company (BHGE). 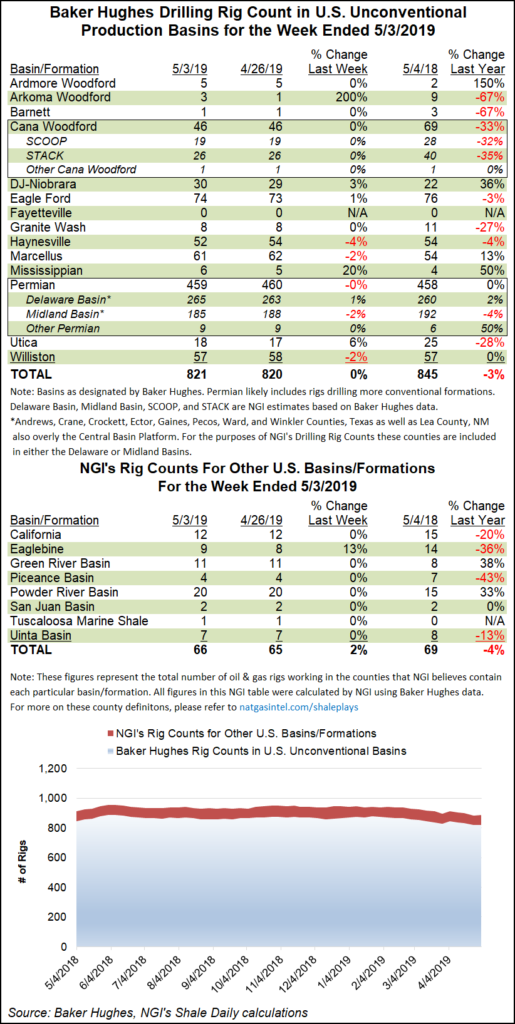 Total land drilling was flat week/week, while the loss of one offshore rig dropped the Gulf of Mexico’s tally to 20, up slightly from 19 rigs in the year-ago period. The total number of directional and horizontal units was unchanged, while one vertical unit packed up for the week.

A decline in oil-directed drilling dropped the Canadian rig count two units to 61 for the week, down from 86 a year ago. The combined North American rig count finished at 1,051, down three units week/week and down 67 units from the 1,118 rigs running at this time last year.

Among plays, BHGE reported a two-rig decline in the Haynesville Shale, which finished the week with 52 rigs, down slightly from 54 in the year-ago period.

The Arkoma Woodford saw two rigs return during the week,. The Denver Julesburg-Niobrara, Eagle Ford Shale, Mississippian Lime and Utica Shale each added a rig for the week, while the Marcellus Shale and the Permian and Williston basins each dropped one rig overall.

Among states, Alaska gained three rigs for the week, growing its tally to nine, while New Mexico added two rigs to end the week at 106, up from 93 a year ago. On the other side of the ledger, Texas dropped seven rigs to fall further behind its year-ago tally, ending the week at 484 rigs, down from 515 at this time last year.

Also among states, Colorado, Ohio and Oklahoma each added a rig, while North Dakota and Pennsylvania each dropped a rig from their respective totals.

Improved pricing on a higher rig count in the Lower 48, along with customers clamoring for high-specification rigs, helped improve U.S. drilling results during the first quarter for Nabors Industries Ltd.

The Bermuda, Hamilton-based oilfield services operator said there was an $11 million improvement in the U.S. market during 1Q2019 from a year ago. However, the Canada rig count and margins fell as the normal seasonal peak was “overwhelmed” by the currently weak market.

The U.S. drilling segment’s average rig count in the Lower 48 increased slightly, as contracted deployments of upgraded rigs offset a minor decline in the number of legacy rigs operating. Nearly all of the high-specification rigs remained under contract.

Meanwhile, Energy Information Administration (EIA) data show the number of drilled but uncompleted (DUC) wells in the major U.S. onshore basins has been on the rise since the end of 2016 and reached a high of 8,504 in February of this year.

“Most of the recent increase in the DUC count has been in regions dominated by oil production,” especially the Permian, EIA said in a research note published Friday. “As of March 2019, nearly half of the total DUCs” counted in EIA’s Drilling Productivity Report (DPR) were located in the Permian.

“In contrast to oil-directed regions, the number of DUCs in natural gas-dominated DPR regions such as the Appalachian and Haynesville regions has decreased by nearly half over the past three years, from 1,230 wells in March 2016 to 713 wells in March 2019.”