A lower-than-expected natural gas storage withdrawal and forecasts for continued mild weather for much of the rest of the month sent March natural gas forward prices down an average of 18 cents between Feb. 10 and 16, according to NGI Forward Look. 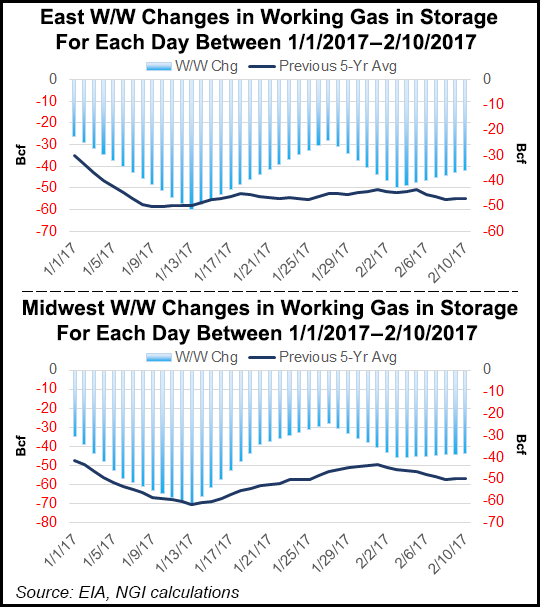 Gas markets just can’t seem to catch a break as persistent warmth across most of the United States has limited natural gas demand for much of the winter. This week is expected to be much of the same as forecasters are calling for mild conditions, with daytime temperatures reaching the 50s to 80s, between 15 and 30 degrees above normal.

Beyond that, forecasters with NatGasWeather are calling for more seasonal weather systems to sweep across the country starting on Friday (Feb. 24-28). There’s likely to be a break March 1-2 for slightly lighter demand before cold air pours down over the Rockies and Plains, then likely also across the Midwest. And while the East Coast could remain relatively mild, much of the rest of the country will be near to slightly cooler than normal, so natural gas demand will be stronger, the forecaster said.

“We continue to expect frigid temperatures into southern Canada in early March, likely impacting portions of the far northern U.S. If it were to trend a little further south and east, the natgas markets would likely notice. Although, the problem this year has been polar air lurks nearby but rarely advances far enough across the border to impress, and that could again be the case this time,” NatGasWeather said.

Forecasters at Bespoke Weather Services said weather models late last week put some colder risk into early-March outlooks, which would increase heating demand and may ease some of the market’s concerns for a storage oversupply situation moving into the traditional injection season, which begins April 1.

“Even with that, by day 15, a strong eastern ridge signal was returning, indicating any cold shot is unlikely to be all that long lived and thus, there may not be all that bullish of a price reaction,” the New York-based weather forecaster said.

Indeed, it appears the slightly cooler trends showing up in the early March forecasts are offering the gas market more of a lifeline rather than an adrenaline shot. The Nymex March futures contract was up just a penny around midday last Friday to $2.86, but then slipped toward the finish to close at $2.834, down 2 cents from Thursday, Feb. 16. As of the close on Wednesday, Feb. 22, the front-month contract had declined to $2.592.

“Prices teased they were going to break back into the previous price trading range this morning but have sold off since,” NatGasWeather said midday last Friday (Feb. 17). “The rest of the trade today will be interesting to see if there are any concerns regarding frigid air over southern Canada in early March, or has the damage been done by the current mild spell and it’s going to take convincing frigid cold to get a rise out of the market?”

Regardless of Friday’s price action, the current and impending storage situation could prove to be detrimental to the markets over the next couple of weeks at least. The U.S. Energy Information Administration last Thursday reported a 114 Bcf withdrawal from storage inventories for the week ending Feb. 10. The reported draw was well below market expectations in the mid-120 Bcf range.

At 2,445 Bcf, stocks were 303 Bcf less than last year at the same time and 87 Bcf above the five-year average of 2,358 Bcf. Interestingly, the three largest regional storage zones — the South Central, Midwest and East — each reported their lowest week-over-week storage withdrawal for Feb. 10 over the last five years (including this year), at estimated withdrawals of 23 Bcf, 44 Bcf and 42 Bcf, respectively, according to NGI’s Patrick Rau, director of strategy and research.

So far in 2017, it would be fairly difficult to find too many days where the week-over-week storage withdrawal was greater than the previous five-year average for each day in question, Rau said.

“That’s happened just 15 out of 41 days in the East, and only 11 of 41 days in the Midwest, and most of those changes were only a few Bcf more than their historical averages,” he added. “So there’s not really too much in terms of statistically significant withdrawals greater than normal so far in 2017.”

One potential cause for the low storage draw in last week’s report was higher-than-expected renewable output, which caused actual gas burn to come in below the modeled day-ahead forecasts/nominations of the power generators, according to data and analytics company Genscape Inc. The company’s nomination-based models suggested a 4 Bcf increase in power burn week over week, while ISO data suggested a decline.

Meanwhile, Bespoke Weather Services noted a loss of 21 total degree days (TDD) week/week, which also led to this smaller drawdown. “The market seems a bit balanced as such a TDD loss would normally bring about a print around what we saw. However, this states very little tightening is occurring, a concern for bulls with no near-term catalyst,” Bespoke said.

Looking ahead, the next two weeks are expected to bring in rather lean storage draws. Houston-based Mobius Risk Group projects that next week’s storage report for the week ended Feb. 17 to show a draw of less than 100 Bcf. “If this occurs, it would be the second such instance in 2017, and lead to a noteworthy surplus expansion version five-year average levels,” it said.

And, looking at the sample of salt dome storage fields, a net injection is possible for the following week, Mobius said. Bespoke also said indications point to a possible injection for this period.

With such bearish storage reports ahead, NatGasWeather said surpluses versus the five-year average would increase to over 150 Bcf, which would be clearly disappointing to markets that had been expecting supplies to be carrying a several hundred Bcf deficit by now with just near-normal winter temperatures. “The background supply-demand environment is still quite tight, so it’s really about winter weather patterns failing miserably to take advantage,” the forecaster said.

As noted, forwards markets as a whole were in step with futures last week. The only standout, once again, was a handful of Northeast points, which continued to post much more substantial declines for March.

Algonquin Pipeline issued an operational flow order (OFO) on Feb. 9 that remained in place until last Friday morning, its website said. A partial OFO remained in effect for part of the Tennessee Pipeline service area.