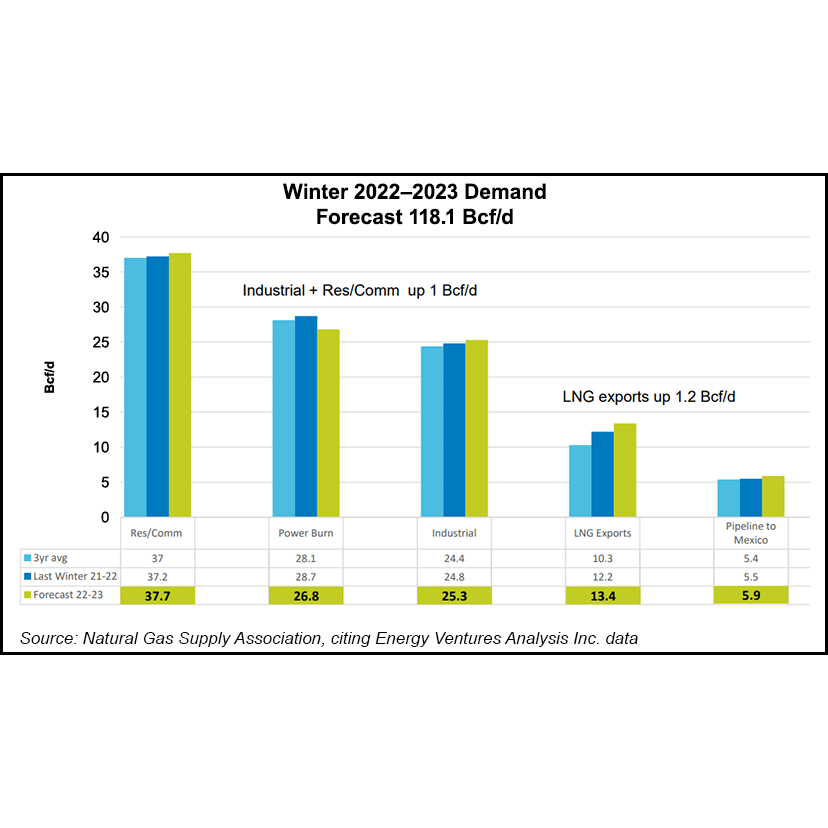 Boosted by an increase in active gas rigs and dwindling drilled but uncompleted (DUC) wells, especially in the Permian Basin, NGSA assumes gas production will be 4% higher year/year when colder temperatures settle in at the start of November. It could be a 7% increase over 2020.

“The outlook shows producers are rising to the challenge of strong winter demand for natural gas at home while meeting the critical needs of an under-supplied global market,” Attwood said.

However, in the forecast, with data from Energy Ventures Analysis Inc., colder winter temperatures than last year and spiking demand for LNG exports and industrial supply could put pressure on already below-average storage.

The NGSA expects the U.S. gas storage market to enter winter 9% below the five-year average of 3.45 Tcf. It would also be less than last winter’s storage levels of 3.64 Bcf.

The NGSA analysis avoided projecting prices for the upcoming winter. However, it estimated that a 3.3% colder winter compared to a year ago, heightened demand and the storage outlook could put upward pressure on prices versus last winter. Henry Hub averaged $4.51/MMBtu during last winter, according to NGSA.

As it has since late last year, when geopolitical pressures from Russia began spiking European demand for natural gas, liquefied natural gas exports are expected to play a part in driving demand over the winter.

However, Attwood said he doesn’t see “a very strong correlation between global gas prices and the U.S. price” in the winter ahead, with the exception of the New England market.

“The U.S.. is going to be exporting the maximum amount of LNG to the global market that it can, and once you’ve hit that level, the remainder of gas supply is definitely staying” within the United States, he noted.

LNG feedgas demand is forecast to grow by 1.2 Bcf/d and Mexico pipeline flows could increase by 0.4 Bcf/d, compared with last winter.

How Much Gas Demand?

NGSA’s demand forecast placed more emphasis on expanding industrial use of natural gas, which it estimated could increase 1 Bcf/d by 2025. At least 15 new projects, three expansions and one facility restart are expected to move forward in the next three years. The trade group reported industrial capacity utilization has also increased by 3% since last year, and “the lower cost of U.S. natural gas relative to international prices gives U.S. customers a competitive advantage.

“Despite the increased risk of demand destruction due to high natural gas prices, the growth of industrial activity will likely continue as manufacturers try to ease the bottlenecks in the supply chain,” researchers wrote in the report.

The NGSA also expects higher natural consumption from utilities this winter because of a combination of more gas-fired capacity coming online and a shortage of affordable coal. U.S. utilities retired 17 GW of coal-fired generation since last winter, while 10 GW of natural gas generation came online. Researchers reported it was the largest resource shift since 2019.

Renewable generation outpaced natural gas, with 45 GW of capacity added since last winter, but the limited availability of coal-switching is expected to partially offset initial impacts to natural gas consumption.

“Higher prices for replacement coal due to spikes in international coal markets will keep the competition between coal and gas tight for the winter, especially in the eastern part of the country,” researchers wrote.