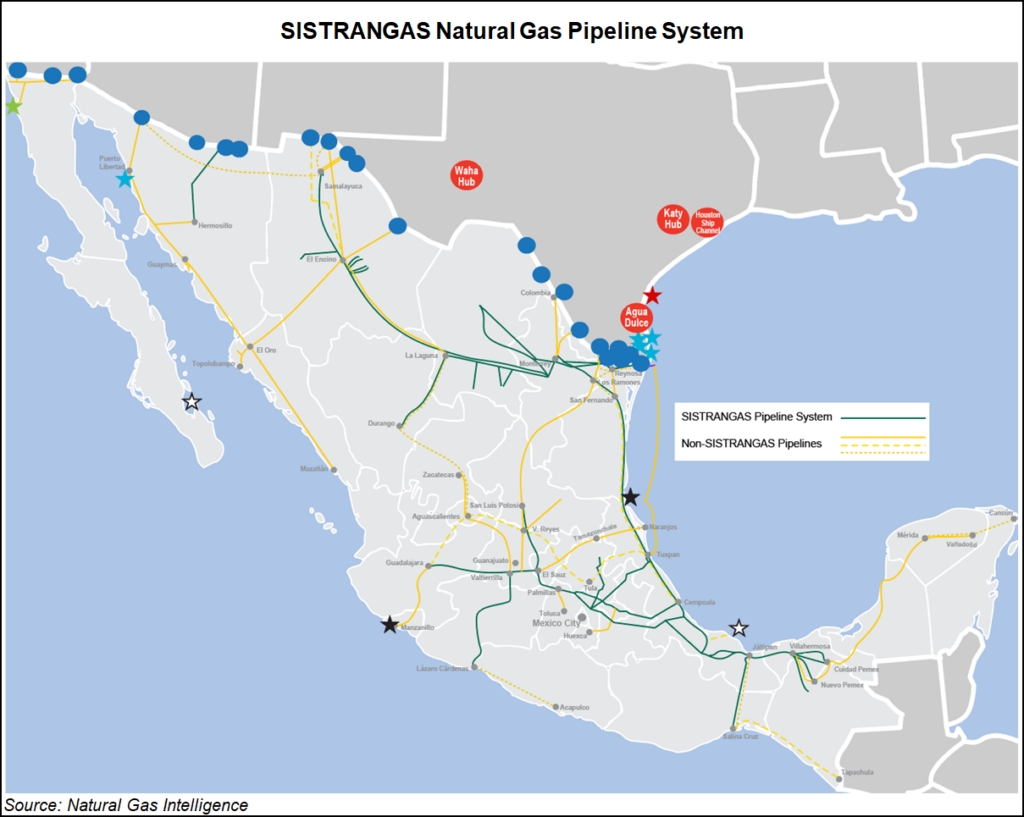 At the end of June, numerous capacity contracts for the transport of natural gas on a firm basis on the national Sistrangas pipeline system will conclude. Some of these contracts deserve special attention because of their size, such as the one between system operator Cenagas and Comision Federal de Electricidad (CFE) for 677,026.67 GJ/day which has been in force since February 2017. In total, CFE and its affiliates will see more than 900 MMcf/d in contracts lapse at the end of the month.  All this capacity in the hands of the most important player in the Mexican gas system raises interesting questions about the renewal of these contracts given CFE’s dominant role not only in the Sistrangas but also in the capacity of the rest of the gas pipelines in Mexico

There is certainly demand for capacity that is not being met. Gas flows have grown significantly in certain segments or connection points of the integrated system. A joint review of the capacities and flows by extraction points shows systematic and contrasting differences. Points that are supplied with interruptible services or excess volumes occur simultaneously with reserved spaces for firm capacity that see low levels of utilization.

Clearly, the daily operation differs from the hydraulic scenario that served as the basis for the 2017 open season process. The routes and capacities in commercial operation still substantially reflect the general allocation process in 2017. Although the primary points have seen some commercial realignments, in aggregate the commercial capacity has not varied much from the 6.3 Bcf/d that was distributed among users of the system. The sum of the contracted capacity now is about 6.1 Bcf/d, which means that part of the maximum daily amounts allocated in the open season have been reduced in some contracts. This released capacity does not necessarily have to be put back into the market in an open season process, but the gas system is different today than it was then and its needs are different.

In previous years, through announcements on its electronic portal or during public events, Cenagas has been clear about the process to follow for the renewal of capacity contracts, in which it offers some flexibility in terms but not in the maximum daily amount allowed for each particular agreement. Even the management overhaul that occurred in December 2018 did not alter this annual cycle. The recent change at Cenagas that saw Elvira Daniel being replaced at the helm by Abraham Alipi Mena is a possible explanation for the lack of clarity around the renewal of contracts. Furthermore, a new open season has not occurred even though new flows have appeared as a result of the operational start of new pipelines. This is important because when new pipelines come online, even if they are not part of the integrated system, they still have impacts on the Sistrangas.

When the Texas-Tuxpan marine pipeline came online in late 2019, important changes occurred in the operation of the 48-inch trunk line owned by Cenagas that runs along Mexico’s Gulf Coast. The Montegrande interconnection, with a capacity of 500 MMcf/d, made it possible to increase injections of imported gas without having to go through the compression stations of El Caracol, Los Indios, Soto la Marina and Altamira. In addition, the interconnection in Naranjos with Transportadora de Gas Natural de la Huasteca stopped working on a daily basis to feed the flow that supplies electricity generation in Tamazunchale and for the delivery of gas into Sistrangas in the Querétaro area for electricity production in El Sauz. Today these volumes flow through TC Energía’s systems, which implies that capacity on the routes that previously served this supply must be available at least partially.

A substitution of routes has also occurred in a similar way in Altamira, with generation plants that switched transportation systems to meet their gas requirements. The western zone of the Sistrangas system has also seen changes in the philosophy of operation due to the coming on line of the Wahalajara system. A pipeline built to bring gas to the Tierra Mojada generation plant in the municipality of Zapotlanejo now serves as a bypass from the Fermaca pipeline to the one owned by Cenagas, adding more gas to an area that previously received gas from El Castillo.

These cases exemplify the dynamics of a complex transport system such as the Sistrangas with multiple injection and extraction points. Without Cenagas and its investment in compression to expand capacity or in new segments to extend the system, the actions of other operators would be mere positive externalities that improve existing operating conditions.

Paradoxically in recent weeks, the availability of gas supply in the southeast of the country has fallen to levels that compromise the way Cenagas operates, with line pack falling below 6.5 Bcf/d on various occasions. In the past, such drops were addressed with liquefied natural gas (LNG) injected from Altamira or from Manzanillo. Today this balancing gas can come from the new interconnections. The effect of gas exchanges between systems is becoming more important than ever.

For example, in Pedro Escobedo, before the operation of the marine pipeline, flows rarely hit 200 MMcf/d. In June 2021, Sistrangas receipts at this point reached 525 MMcf/d. The direct interconnection in Montegrande, designed to receive  500 MMcf/d, this week operated at full capacity. In other words, the net effect of the marine pipeline on the Sistrangas is 1 Bcf/d. Regarding the effect of the interaction with the Fermaca system, although of lesser magnitude, the incremental effect is between 150-200 MMcf/d.

This summer, Cenagas should take the contract renewal process as a pretext to carry out an in-depth review of the operational capacity of all routes that make commercial sense and carry out a new general exercise of allocation of capacity. In a first stage, it could well follow the spirit of the transitory rules of the Hydrocarbons Law, in what was called “Round 0” and give CFE the opportunity to relocate its contracted volumes to expire on June 30 to use its maximum daily capacity with the new injection points.

The existence of such new points has occurred thanks to the infrastructure that CFE has anchored and brought into being. Once this allocation has been made, there would be substantial capacity available at multiple import points that can be used by existing Cenagas users who have differences between their capacities and volumes at the same time that it would open space for unmet demand and the entry of new market participants. In short, it is very likely that at this time, what prevents the market from having access to fresh capacity is not a CFE grab or an energy policy at odds with private investment. It is enough with a little technical expertise and commercial imagination on the part of Cenagas to measure effective systemic capacity and to conduct a general capacity allocation process that leaves all agents, public and private, happy.