Editor’s Note: NGI’s Mexico Gas Price Index, a leader tracking Mexico natural gas market reform, is offering the following column as part of a regular series on understanding this process, written by Eduardo Prud’homme. This is the seventh in the series. 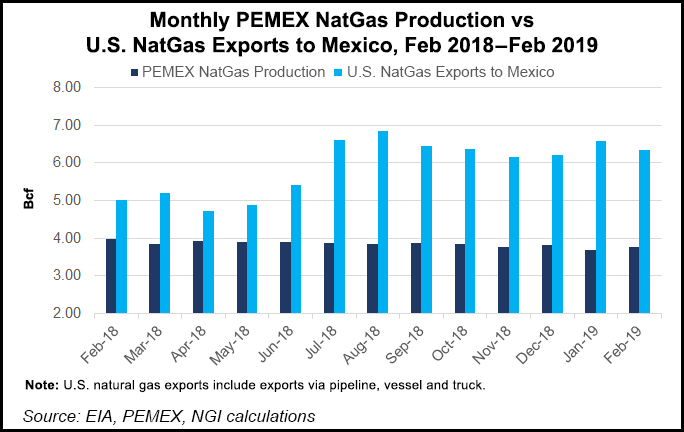 On May 6, pipeline operator Cenagas published the preliminary results of its 2019 consulta pública, a national survey of the market geared at assessing natural gas demand in the country. The results serve not only as a way forward in designing public policy, but they also help to understand the market as a whole.

That fact that the consulta is voluntary enhances the richness of the data. It’s not imposed from above. Each year market agents actively participate in the laborious process, and their willingness to do so reflects the inelasticity of their natural gas demand.

This is a good sign. If the results lead to concrete action on the part of Cenagas, the number of participants and the quality of the information will grow year-on-year. On the contrary, if the results do not lead to new pipeline projects and capacity open seasons, users might perceive future editions as lacking importance and simply won’t take part.

Some demand isn’t reflected in the results, either as a commercial strategy on the part of market participants, or due to indifference or a lack of knowledge around the consulta process. Likewise, users who determine that their projects are outside of the scope of Cenagas might not see the utility in participating.

Since this isn’t an open season or doesn’t have any binding consequences, the consulta might also reflect loose demand needs. Although participants are asked to provide annual consumption profiles that show demand changes through the year, the most practical option for an industrial user is to provide their maximum productive capacity. That said, gas consumers are also increasingly sophisticated and understand that they pay a transport fee, so the oversizing of projects does not necessarily benefit them.

Even taking these points into consideration, the results are highly valuable and insightful.

According to preliminary findings, demand growth in transport needs in the electricity sector in Mexico in the next five years adds up to about 1 Bcf/d. Ten percent of that increase corresponds to the expansion of existing plants. The rest is related to new plants and or fuel conversions to natural gas. The question is: how much of this volume will be served by Cenagas and how much by pipelines outside the system?

The consulta showed that industrial demand growth through 2024 adds up to about 0.5 Bcf/d. The expansion of industrial facilities corresponds to 400 MMcf/d of this amount, with 100 MMcf/d related to new facilities or fuel substitutions at plants. Since there is very little industrial consumption outside of the Sistrangas, it’s easy to deduce that this additional demand will be met by Cenagas. As natural gas penetration advances in regions such as Sinaloa and southern Sonora, service requirements for industrial users there will also increase.

Distribution companies see incremental demand totaling 0.6 Bcf/d through 2024. This volume is divided equally between growth in existing distribution systems and those to be developed. This diversified position can be explained because the distribution zones served by Sistrangas have reached a degree of market maturity. These companies are also expanding operations with interconnections to new pipelines.

Finally, and perhaps most tellingly, a total of 1 Bcf/d additional capacity was requested by commercial intermediaries through 2024. This is a clear reflection of what was sought by the creators of Cenagas. Before 2017, the only marketer present in the Sistrangas was Pemex. Today there are numerous agents that seek to balance the needs of gas consumers with the needs of producers in both Mexico and the Southern United States.

This demand underlines the need for adequate capacity throughout the entire gas system. Adequate liquidity along with the benefits of continuity and efficiency for consumers will be achieved if natural gas can get where it is needed without restrictions. The way in which Cenagas responds to this segment of users is decisive to the consolidation of Mexico’s natural gas market.

Overall, the demand projections are consistent with what was foreseen in initial Cenagas planning: that natural gas demand in Mexico would grow by about 0.5 Bcf/d each year. Given this figure, along with the decline in Mexico’s domestic production of around 150-200 MMcf/d per year, the opportunity for U.S. exports adds up to total growth of around 4 Bcf/d by the end of 2024 as compared to today.

It’s unfortunate that natural gas used in oil production, refining and the petrochemical segments is not included in the consulta results, nor are the projections of state companies Pemex and Comisión Federal de Electricidad (CFE). But despite this, the consulta reveals an undeniable fact: that users whose gas supply is met beyond Pemex now have weight in the market, and not being able to meet that demand in a legal framework of open access to supply options is unacceptable.

Another conclusion is that the capacity of the Sistrangas is insufficient to meet future demand. A system’s capacity is not just the sum of injection capacity, but its maximum possible flow rate given its configuration and operational and commercial routes.

The Sistrangas was designed to bring southeast gas injected mainly at the Cactus and Ciudad Pemex processing centers to demand centers in the southeast associated with Pemex’s own needs, and industrial and power plants in the center and west of the country; while the huge north corridor that goes from Matamoros (Brownsville) to Ciudad Juárez (El Paso) was meant to be supplied by Burgos gas, along with some remaining flows from the Southeast, and imported gas. The capacity assigned by Cenagas in its first open season, 6.3 Bcf/d, is the result of this flow configuration.

If an increase in domestic production actually happens, nominal capacity can increase significantly. But the incremental demand reported in the consulta can’t be met by Sistrangas routes without there being new investment in infrastructure — unless there is a massive capacity release by users on the Sistrangas who then migrate to the pipelines anchored by the CFE; or, as mentioned before, there is an increase in domestic production.

Therefore, it’s important that there is space in the market for agents outside of Pemex and CFE to find practical solutions in the short term to meet rising demand. This can occur either through centralized planning on the part of Cenagas in designing new pipeline infrastructure with sufficient capacity to guarantee continuity of supply, or through private sector agents who can coordinate the efforts of developers, marketers and gas consumers to bring balance to the market.