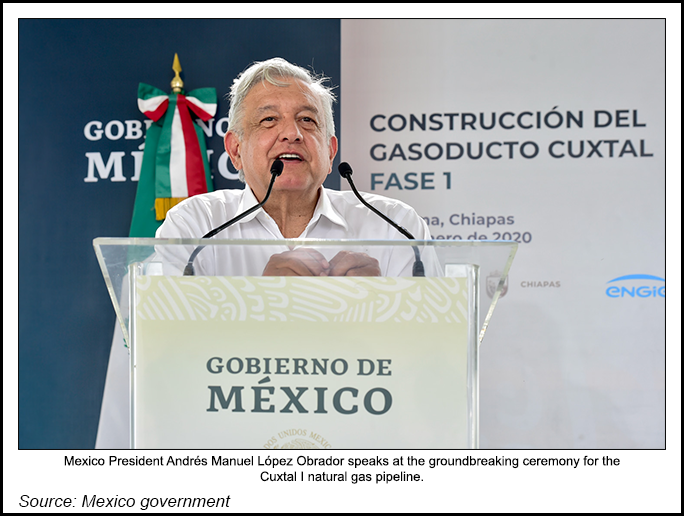 The Mexican government has made a lot of noise trying to highlight a new private investment opportunity in the Yucatan Peninsula. The general theme is that the president’s energy policy is about to reverse the “neoliberal abandonment” of the peninsula. The plan, which is good news for the market however you spin it, includes investment of $220 million between now and 2024. This includes a 193-kilometer (km) power transmission line. State power firm CFE subsidiary CFEnergía will also anchor a new pipeline, Cuxtal II, which will extend the Mayakán pipeline from Valladolid to Cancun. At 158 km, the new route will have the capacity to transport up to 240 MMcf/d and according to official data, will be ready in 25 months. This extension also involves a shorter segment at the other end of the Mayakan system. Known as phase I of the Cuxtal pipeline system, when complete later this year, the 17-km pipeline will connect Mayakan with the Sistrangas national pipeline grid and the Cactus gas processing plant, increasing input capacity of the system from 240 MMcf/d to 500 MMcf/d. The new flow is destined for two new 493 MW power plants being built by CFE in Merida and Cancun, which will enter operation in 2023 and 2024.

An economically efficient energy strategy in which costs, benefits and risks are assigned to multiple agents through the market does not seem to be the central axis of current energy policy. Although the construction of critical segments of the project will be undertaken by France’s Engie, which owns and operates the isolated Mayakan pipe, President López Obrador emphasized in his speech promoting the project that the strength of the plan will lie in the coordination between state giants CFE and Petróleos Mexicanos (Pemex). In his narrative, the Yucatan’s energy woes are a result of bad policies focusing investment in the north of the country and in deep waters, when everyone knew that the wealth of hydrocarbons in Mexico is in the southeast and its shallow waters. Those bad decisions of the past only benefitted foreign private companies, the argument goes. Now, with the change of regime, projects will seek to benefit the population and will be based on commitment and loyalty of the tens of thousands of workers at Pemex and CFE.

In a video prepared by CFE that explains the scope of the project, several things illustrate some recognition of the commercial and operational reality of the Mexican energy system. The Cuxtal I pipeline will be a bridge that will allow the Yucatan Peninsula to have access to the “cheapest gas in the world” that will arrive thanks to the marine pipeline and NET system. Although today the connection to the Cactus processing center is being billed as the supply solution, the underlying solution lies in having a constant, reliable source of gas. And today, in the diminishing supply conditions prevailing in the Mexican southeast, Pemex cannot guarantee sufficient production to meet demand. In essence, CFE will seek its solutions independently from Pemex. If Pemex is part of the solution, great. If it is not, other options are in place.

Cuxtal I is a necessary but insufficient condition to achieve continuity and growth in gas supply to the Yucatan. Its construction diversifies the injection sources for Mayakan. But it is pertinent to mention that this exercise is not the first time changes to the system have been made. In 2013, Mayakán had an extension of its system to add the Nuevo Pemex processing center as an injection point given the drop in production and output pressure of the processed gas in Ciudad Pemex. This extension was a temporary solution that worked briefly, but in recent years, there were days when gas flow was interrupted for several days due to a lack of gas in Nuevo Pemex or balance dilemmas in which Pemex chose to send gas to the center of the country and not to Yucatan.

Balance conditions in the southeast have achieved some stability in the past thanks to a programmed, physical exchange of regasified LNG delivered in Altamira for gas produced in Cactus, typically transported westward by Sistrangas through Cenagas capacity management. This exchange often drums up operational problems and administrative coordination that transcends the commercial roles of the parties involved. Although the physical exchange occurs between Pemex as a marketer of the gas that is injected into the Sistrangas in Cactus and CFE as a marketer of the imported LNG in the Altamira Terminal, the implementation of this exchange requires rigid institutional agreements not only between the marketing parties but also between processing centers and transport systems, and this is where Cenagas as pipeline operator comes in.

As users of Sistrangas, although CFE injects gas from Altamira LNG to various plants in the coastal areas of the Gulf and the center of the country, for swap purposes, CFE does not alter the handling of the corresponding routes in its transportation contract with Cenagas. In contrast, Pemex routes are used to implement the exchange. In particular, routes that would take Cactus gas to consumption centers in the southeastern part of the country and center of the country will not be fully used to supply the destinations. This action allows Pemex to stop injecting gas into Cactus associated with these routes. The gas that is no longer injected into the Sistrangas can be injected from Nuevo Pemex to the Mayakan system. The imbalance caused by this operation leaves Pemex’s supply in the southeast and center of the country incomplete. The way in which the balance is returned corresponds to CFE with a replacement of gas delivered to the Altamira terminal.

However, CFE does not necessarily have routes with the extraction points that Pemex serves as a marketer in its contracts. That is, although the exchange of the molecule can be resolved between Pemex and CFE, the assurance that a balance in transport capacity management occurs is still pending. The way it is resolved is through imbalance payment or reimbursement to the pipeline, an operation known as payback. This operation, if properly nominated, confirmed and scheduled by CENAGAS, leaves the system commercially in balance. The payback is requested by Pemex, and the gas is delivered by CFE on behalf of Pemex.

The amount available for swap via LNG from Altamira was limited not only by the general operational restrictions that Cenagas may impose, but also by limitations in regasification capacity. This scenario changes significantly with the entrance into operation of the marine pipeline given the enabling of the interconnection with the Sistrangas in Montegrande, in the area of Tuxpan, Veracruz. In the coastal area of the Gulf, the supply coming from Cactus can be complemented or replaced by imported gas, which will have the price of the Agua Dulce area plus the cost of transportation, that is, significantly less than the price of LNG. With this change in operating conditions, Pemex and CFE are in a position to establish an exchange agreement for 240 MMcf/d.

This Sistrangas trunk is not yet ready to send large quantities to the Southeast area. Once the reconfiguration of the Cempoala compressor station, which is operated by Cenagas, is achieved, the transportation of gas from north to south to points in the Southeast area will replace Cactus. Therefore, the gas produced by Pemex can be substituted to a greater extent in the Minatitlan area and larger volumes can be redirected to the Yucatan Peninsula in the Mayakan pipeline. If the Cuxcal pipeline is connected to the Sistrangas and an adequate management of the pressure differentials is achieved, it will be possible for the gas received in Montegrande via the marine pipeline to reach Yucatan. This suggests in a veiled way that the intention of CFE is that its interconnection with Sistrangas is its exclusive solution, not that of the market.

Needless to say, due to the relevance of the projects, the natural organizer of them should be Cenagas. Throughout this text we see that in the implementation of the physical exchange solution, daily work is carried out by Cenagas programmers in the nomination and confirmation cycles. But it is CFE who is being tasked with the project. In other words, President López Obrador has endowed the Director of CFE, Manuel Bartlet, with an incontestable leadership in the gas sector. Cuxtal is great news for gas supply in the Yucatan, but not necessarily for the gas market and the electricity market on the whole.