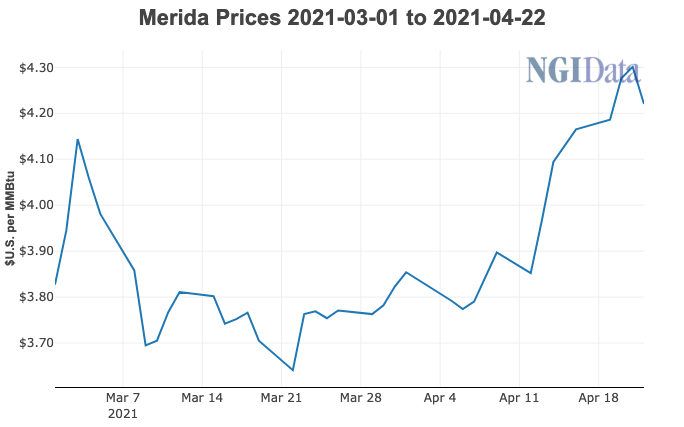 Summer in Mexico is here and with it comes higher consumption of electricity. Despite plans by the current government to use readily available fuel oil in Comisión Federal de Electricidad (CFE) power plants, the operational reality reveals a clear preference for natural gas in Mexico. Thus, in recent days, the volume of gas imported into Mexico at its northern border has reached volumes that exceed 7 Bcf/d. These volumes would not be possible without the infrastructure that exists today. But more needs to be done to guarantee gas availability for more of the country, in particular the southeast.

First, some good news. The Sur de Texas-Tuxpan marine pipeline now injects 500 MMcf/d of U.S. gas into the Sistrangas pipeline system through Montegrande. Another 450 MMcf/d reaches the Sistrangas through the interconnection at Pedro Escobedo, south of Querétaro, on the Transportadora de Gas Natural de la Huasteca system. Last year’s startup of the Fermaca system from Waha in Texas to Guadalajara has also had an impact on Sistrangas in two injection points near Guadalajara: Zapotlanejo and El Castillo. Depending on the conditions in the Bajío area, injection of U.S. gas could reach an aggregate 350 MMcf/d at these points.

The impacts of new infrastructure in areas not covered by Sistrangas are also palpable. More than 930 MMcf/d flowed through the marine pipeline from April 19-23, and more than a third of this fuel didn’t hit the Sistrangas. In the Nueva Era gas pipeline, more than 400 MMcf/d enters the country to be delivered to Monterrey and surrounding areas. In Chihuahua, in multiple interconnections, U.S. volumes above 1.2 Bcf make it into Mexico every day. More than half of that amount reaches the central highlands of the country.

As a result, under normal conditions, the electricity system in the center and north of Mexico can count on abundant gas availability. Everything is now in place for greater gasification of industrial activities in Mexico’s most economically developed areas. But there are pending projects in the country’s latest five-year plan developed by Cenagas that are not progressing.

The first five-year plan designed by Cenagas was responsible for the pipelines that have come into operation in the last three years and a few that have been left unfinished due to social issues. The just-released technical opinion of the latest plan by regulators at Comisión Reguladora de Energía (CRE) warrants a close look. The first noteworthy point is that the schedule for projects planned for 2021 has been postponed by a year. This delay is explained by a lack of clarity in planning. For Leona Vicario, a header that would redirect flows from the Sistrangas to the Mayakán through the Cuxtal project helping to improve connectivity in the southeast, Cenagas lacks the basic parameters and a planned operating philosophy. For example, it’s unclear if the header will be run by Cenagas or Engie SA or a third party.

The Dulces Nombre (in the Monterrey area) and Francisco I. Madero (in the Laguna area) hubs are interconnection projects that seek improvements in measurement capabilities and possibly changes in pressure conditions to improve gas interchange. Although these headers are expected to start operations in 2022, there is not enough evidence about the nature of the projects, nor who would invest in the projects and operate them. Nothing is said or known about the allocation of capacity or the operational improvements that would result from such interconnections.

In Monterrey, the possibility of connecting Nueva Era, an expansion of Kinder Morgan Inc.’s pipeline and the Sistrangas open the exciting possibility of creating a market center that might be the location of a Mexican price index. A project of this nature is very significant, but it does not seem to be a priority. The connection between the Sistrangas and Wahalajara at the Chavez Compression Station that gives rise to the Francisco I. Madero project would allow for different pricing options in the Torreón-Saltillo-Monterrey corridor. These gains in efficiency and reliability of supply in the north of the country should be given priority, but aren’t. This is despite the fact that, according to the flow modeling analyzed by the CRE, this area will see rising demand in coming years. It is clear from CRE’s analysis that the large gas pipelines connecting Texas with Mexico and the geographic proximity to Permian gas are not enough to meet national demand if there is no solution to the existing bottlenecks.

However, the diagnosis that should cause the most alarm is the one related to the southeast. In 2024, Cenagas sees a deficit of 970 MMcf/d in the area. The decline in national injection in the southeast will make the complementary supply from the Gulf of Mexico insufficient, and imported gas given current infrastructure would not meet the shortfall. It is reasonable to imagine that the urgency is actually greater given that Cenagas uses official Petróleos Mexicanos (Pemex) figures that tend to overestimate future production. Today we know that the production of the Cactus and Nuevo Pemex gas processing centers hardly reaches the Coatzacoalcos area on a normal day. Supply is already precarious, despite the interconnection of Montegrande and new pipes in the Yucatán peninsula. They remain inadequate to meet the demand of all the generation plants planned and connected to the Mayakán.

Everything seems to indicate that in the coming years sooner rather than later a power supply crisis of great consequence will inevitably occur in this region. Although CRE’s technical opinion of sector planning covers other issues such as storage, the transoceanic pipeline to Salina Cruz, the Prosperidad pipeline in the states of Oaxaca and Chiapas, and the weather events that occurred in Texas in February 2021, these pale in comparison to a gas shortfall of close to 1 Bcf/d. The tone of CRE’s opinion is severe, but except for certain generalities, there is also no implementation proposal in the document that provides a solution or opens the door to mitigation alternatives.

A sensible list of solutions must start with reinstating oil and gas rounds to boost domestic production, a floating storage and regasification plant for liquefied natural gas imports, expansion of interconnections between the marine pipeline and the Sistrangas, and even an extension of the undersea line. Moreover CRE should be a critical voice not only of Cenagas but also of the energy policy currently espoused by the Energy Ministry Sener, which has hurt the investment conditions needed for new projects in the energy space.