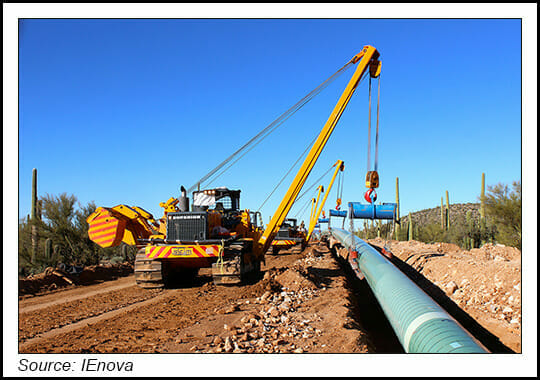 Mexico in its history has never had so many natural gas injection points, pipeline routes throughout its territory, and natural gas capacity on its lines. Yet this enormous potential for growth in gas transactions and volumes also faces a climate of disdain toward the private sector not seen in the past 30 years.

The operation of the gas network during the Easter holiday is a good reflection of this conundrum. Even before the confinement caused by the pandemic, the Easter holiday at the start of April was a turning point in Mexico’s annual energy demand. For a couple of weeks, the demand for electricity decreases, and with it the demand for natural gas. At the same time, the return of economic activity after the Easter vacation marks the beginning of energy demand growth that peaks in the hottest days of summer. This peculiar Easter behavior has been used in the past by operators of the energy networks to coordinate the maintenance of the main national supply routes.

Under the leadership of the Energy Ministry, pipeline operator Cenagas would in early April implement a supply plan that included the massive purchase of liquefied natural gas (LNG) at the Altamira and Manzanillo terminals as backup. During this time, users were warned about the importance of disciplined consumption in accordance with confirmed volumes in order to maintain adequate operating conditions. Power grid operator Cenace would swap out natural gas for other fuels in generation to guarantee continuous gas supply to homes and industries.

From a national perspective, and this is great news, the operational situation in 2021 doesn’t really reflect past limitations. This year, the maintenance of the system has occurred in the Villagrán compressor station in Tamaulipas state and the Dr. Arrollo station in Nuevo León, where from April 1-5 gas flow was limited to 650 MMcf/d in the TAG Norte pipeline operated by Infraestructura Energética Nova (IEnova). As a result, operating conditions on the Sistrangas national pipeline system dropped at the Ramones Phase I injection point from 1.633 Bcf/d on March 30 to 1.150 Bcf/d on April 5.

But gasification of large volumes of LNG has not been necessary, and the national electricity system has not required fuel switching. Although U.S. imports to the Sistrangas fell to 2.802 Bcf/d on April 2, this has not meant a pressing situation for the country. The Texas-Tuxpan marine pipeline which came online in late 2019 has effectively supplanted the missing volumes. During the Easter period, the Sistrangas received 750 MMcf/d from the marine pipeline. In terms of infrastructure, energy security has improved substantially as a result of investment decisions triggered by the modifications inherent in the 2013-2014 energy reform.

However, this good operational news has not necessarily been good news from a business perspective. The allocation of capacity in the different inbound pipelines from Texas and the coordination of nominations downstream in the systems operated by Cenagas have not always gone smoothly or followed the spirit of nondiscriminatory open access. The operational restrictions due to maintenance on TAG Norte did not lead to an equitable apportionment of volumes, but rather priority has been given to state firms Petróleos Mexicanos (Pemex) and Comisión Federal de Electricidad (CFE). At the end of March, many marketers saw that their nominations were not confirmed even as flows in the pipeline system did not seem to be interrupted.

February events related to winter storm Uri highlighted the Mexican energy sector’s dependence on gas produced in Texas. Geography prevents alternative sources in practical terms beyond the LNG that can be stored in Altamira and Manzanillo. Without new oil and gas rounds, and because of the ban on unconventional production, domestic production won’t rise anytime soon. Even still, Mexico’s gas situation with a few tweaks could be considered to be in good shape. Today, the main threats to energy security come from energy policy.

In March, President López Obrador presented to Congress a bill that aims to change the Hydrocarbons Law. The bill would give further control to the state in permitting the activities of transportation, storage, distribution, compression, liquefaction, decompression, regasification, commercialization and sale to the public of hydrocarbons, petroleum products or petrochemicals. The modifications to the law include restrictions that will inevitably strengthen the presence of Pemex and CFE in the midstream and downstream sectors.

For example, in the transportation, distribution and commercialization of natural gas and petroleum products, an investor seeking to obtain a permit under the proposed new law must demonstrate that he has sufficient storage capacity to carry out his activities. Given the non-existence of natural gas storage facilities in Mexico, a new smaller-scale transporter will hardly be able to prove such a requirement. As a result, the transport network will see its rate of expansion slowed down, unless the development of a storage project occurs soon.

The modification of Article 53 of the law is especially worrying. In its current wording, once the time period in the permit granting process has expired, a permit is automatically granted. Clearly the idea here is to prevent the bureaucratic apparatus from becoming a detriment to free competition. The new initiative would modify this so that requests not answered within the legal timeframe should be understood as denied.

Another element causing concern is the inclusion of new grounds for revocation of permits with drastic punitive consequences. If a permit is revoked, the state would exercise its power to temporarily occupy facilities and intervene in the operations of permit holders. Pursuant to the proposed changes, the Energy Ministry and regulator Comisión Reguladora de Energía (CRE) may be assisted by the state companies to continue the revoked activities in the occupied, intervened or suspended facilities. There is definitely an air of expropriation in the proposed modification. In an extreme interpretation, the amended law allows Pemex to regain its market power through the appropriation of foreign infrastructure.

A measured analysis would suggest that the proposed changes to the law represent a formalization of the objectives of the current government. Contracts won’t be revoked but the central message is clear. Private participation permitted in the past will be tolerated, but not encouraged. Private investment will occur at the discretion of the Energy Ministry. CRE is now de facto subordinate to said ministry. The state and its companies are the central axis of energy security.

For the time being, there will not be a complete reversal of the 2013 market opening. Policy decisions will not affect the continuity of natural gas services and there is no reason to foresee a massive flight of investment. The prevailing environment might just mean a pause in investment flows. However, when the energy sector is looked at in terms of the great leaps in infrastructure and regulation, the wasted potential is enormous and the present opportunity cost in the long term will be the true legacy of the “rescue of Mexico’s energy sovereignty” so longed for by López Obrador.