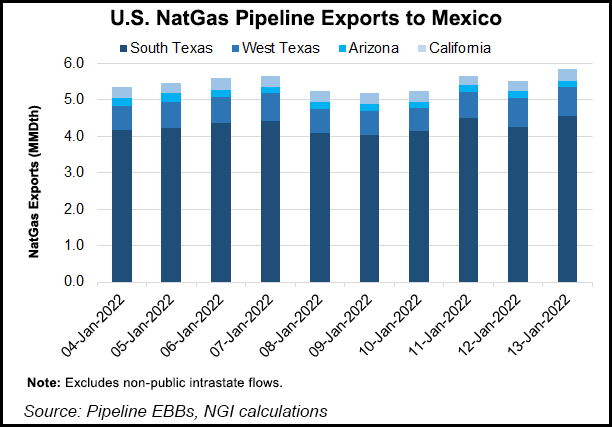 The year 2022 is littered with risk for economic activity in Mexico. The persistence of an inflationary environment, the expectation of meager growth, slowing investment, the continuation of capital flight, tensions between the government and the private sector, amd a treasury increasingly committed to the financial rescue of Petróleos Mexicanos (Pemex) are all depressing to contemplate. However, President Andrés Manuel López Obrador’s popularity is sky-high. This perception of political infallibility is going to fuel his ambition to get his energy reform passed.

Despite not having enough votes in Congress, the first quarter will see the government trying to convince the population that constitutional reform in the electric power sector is needed. They will argue that strengthening the Comisión Federal de Electricidad (CFE) is necessary to achieve fair prices for electricity, and that the limitation of private companies to generate only 46% of electricity will allow the state to guarantee that there is no lack of power in homes.

The Mexican state is already bending over backwards to save state energy firms. According to the annual financing plan prepared by Mexico’s Ministry of Finance, CFE’s financing needs last year were estimated at approximately $3 billion for the payment of debt and this year the figure is $1 billion. In 2022, Pemex will need more than $10 billion of public financing to stay in operation. From the statist perspective of López Obrador’s administration, the complex financial situation of CFE and Pemex is a symptom of the damage that opening up energy to the private sector brought to Mexico. They are merely righting the ship.

The flaw in this diagnosis is that government officials confuse the pair of state-owned companies with the energy industry at large. The current thrust of energy policy is to restore the economic power of Pemex and CFE so that they serve as the engine of development and become an expression of the strength of the government.

CFE’s big complaint about the economic dispatch rules is related to the fixed costs that it has to absorb when it shuts down its plants when they are displaced by private generators. The argument goes that CFE is defenseless against the entry of private companies into the sector.

Research shows that things could get worse. According to the World Energy Council (WEC), Mexico’s energy performance between 2011 and 2021 improved in important areas. In the field of energy security, there is now greater diversity in generation technologies. In terms of equity, there is better access to electricity, and electricity prices allow for greater affordability. In the sustainability dimension, the contrast with 2011 shows that today carbon emissions associated with electricity generation are lower.

The outstanding negative has to do with Mexico’s dependence on imports.

Dependency on imports has actually grown during this administration, while they dropped during the previous one. This shows that the policies aimed at achieving one of the great objectives of the current government – so-called energy sovereignty – have actually worsened Mexico’s dependence on imports.

There has also been a setback in environmental performance. The opening of the energy sector in 2013 resulted in greater diversity in the generation matrix, and allowed for a greater use of natural gas in the production of electricity, which means better prices for electricity. The promotion of renewable energy projects with clean energy certificates and special transmission fees helped reduce carbon emissions. But this administration has seen the Energy Ministry end the policy of clean energy certificates. They were seen not as a financing mechanism for wind or solar projects, but rather as a way for private capital to take advantage of CFE’s transmission network while stealing market share in the generation segment. Things will only get worse if the government is successful in achieving changes to the legal framework.

A simulation exercise of generation plants in Mexico sponsored by the National Renewable Energy Laboratory (NREL) quantifies the potential impacts on the electrical system that López Obrador’s reform would cause. Production costs in a reform scenario versus business as usual would grow by between 31.7% and 52.5%. This would mean the government would have to inevitably subsidize CFE’s operation if it wanted to keep basic electricity supply rates low.

With market rules that give priority to CFE plants, the use of fuels would change dramatically. Mexico’s commitments to the Paris Agreement would be called into question with increases in CO2 emissions, according to the report. The reason for these increases is in the resulting intensive use of fuel oil. If the reform went ahead, the burning of fuel oil by CFE would grow between 823.7% and 1,119.5% compared to the levels typically observed today. However, this is not necessarily at the cost of less natural gas use.

CFE plants that use gas have lower thermal efficiency, which means that each kWh of electricity generated requires more gas. With more CFE plans operating, natural gas consumption could grow between 5.5% and 28.9% under a reform scenario. With these numbers and given zero growth in domestic production, the dependence on natural gas imports would be accentuated. If the most extreme scenario projected by the NREL team materializes, the incremental volumes would mean close to an additional 1 Bcf/d of natural gas would be needed in Mexico’s generation segment.

The results of the NREL simulation and the review of the historical behavior of the WEC indicators deserve to be analyzed in a North American regional perspective. Energy policy in Mexico does not necessarily go against the commercial interests of the United States. The prospect of an increase in gas exports for U.S. producers even with a reversal of the open market scheme changes the perception of risk in doing business with Mexico. Emissions reduction commitments would be hit, however, a situation that could generate discomfort within the three countries that make up the United States-Mexico-Canada-Agreement. The strain on Mexican public finances caused by the potential reform could also lead to economic difficulties that would benefit no one.