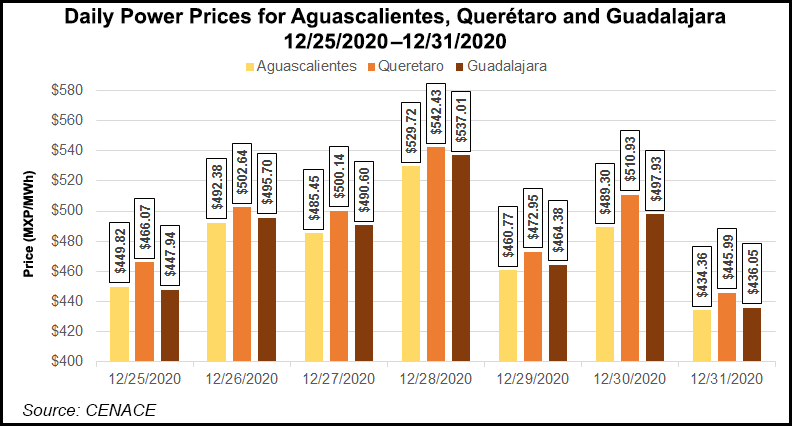 On December 28 at 2:28pm, the Mexican electric power system manager Cenace was thrust into the chaos of a power emergency when 8,696 MW of electricity went offline. At the time, the National Interconnected System that covers Sonora to Yucatán was satisfying a total demand of 31,789 MW, so about a third of the country lost power. Restoration of service took 1 hour and 44 minutes. Cenace claimed the origin of the problem lay in a transmission line in the border state of Tamaulipas.

Nothing frightens a power grid operator more than the specter of service interruption. Once the problem is solved, years of consistent work and following protocols are overwhelmed by an avalanche of accusations and strident attacks from affected users. In a politicized environment such as that in Mexico today, in which the energy sector is an arena of confrontation between the current political elite and various economic interest groups, an essentially operational event is turned into a heated discussion over energy policy.

The truth is a power disruption can be the result of a concatenation of fortuitous situations without a foreseeable pattern and therefore is outside the scope of the operator’s prevention efforts. But strategic risks do emanate from the major decisions of sector agents, along with market concentration, insufficient investment, and poor energy policy leading to situations that can cause a lack of continuity or reliability in energy supply.

At the moment, the official explanation attributes the failure to exogenous events. But what happened can also be seen as part of a slow deterioration in the Mexican energy system accumulated over the past two years. In time, a root cause analysis should shed light on what happened. Ideally, it should be prepared by an agency or company specialized in this kind of investigation with access to all the information available to Cenace about the event. A report of this nature should be reviewed in turn by the Cenace evaluation committee made up of the Ministry of Energy (Sener) and the sector regulator CRE. If it is an event attributable to a failure of a transmission line, CRE should question the CFE division in charge of transmission to determine if its operations have been in accordance with the principles of quality, reliability, continuity and security in accordance with article 28 of the Electricity Industry Law (LIE). CFE could then be subject to the payment of an economic penalty that could reach 10% of its gross income if the problem occurred without just cause.

The problem is that for the last two years, the patent closeness between Cenace, CRE, Sener and CFE has blurred all the counterweights that motivated the institutional design of the sector. In this context, the statements in the wake of the event by Cenace and CFE provoke all kinds of suspicions. A review that reveals that the operational failure was a mere fortuitous event will hardly be accepted by private sector players.

The problem is the government has asked its ministries and regulators to strengthen state monopolies and discourage private participation in the supply of primary and secondary energy. The result is a concentration of market power and a slowdown in investment in infrastructure by the private sector leading to a breakdown in energy security.

Energy security is about vulnerability in supply. The López Obrador government thinks it has to do with importing too much. President Lopez Obrador’s promise to rescue energy sovereignty is an aspiration to reverse trends, limit imports and produce domestically. This is behind new import and export permit rules rushed through in official decree on December 26.

In essence, this administrative measure is a barrier to entry to marketing agents of hydrocarbons that comes with a long burdensome list of informal requirements that are difficult to fulfill and that demonstrate a lack of understanding of brokerage transactions. Each applicant must submit a detailed layout of the route from admission to the end user. To this must be added the display of all contracts with all suppliers and with all customers. Cost projections and information on expected volumes are also part of the requirements. And in a flagrant attack against the efficient development of the markets, one of the central principles of the Law, Sener can alter the amounts proposed by the requesting agents. The measure clearly discourages commercialization activity.

A more detailed review may reveal the new rules are in violation of the United States-Mexico-Canada-Agreement (USMCA). Until legal challenges are mounted, the consequences for the domestic market will gradually be felt by users. The emergence of a new transaction cost, and shortages fostered by government intervention will raise prices. But even this will not promote new domestic oil and gas production because Pemex simply does not respond to the economic signals that are conducive to it. Pemex produces what it can, not what is profitable for it.

The cancellation of upstream rounds and the logistics difficulties that private producers face are not exactly levers to spur new domestic production. In the case of natural gas, demand is inelastic and despite these new rules on imports and exports, gas from Texas will continue to be in demand. In all likelihood, CFE will consolidate its commercialization market power at the same time that it has managed to monopolize a large part of transportation capacity through Mexican territory.

Importing from Texas is lower risk for Mexico than domestic sourcing. There are multiple cases in which Pemex has interrupted the contractually committed delivery of gas invoking force majeure. Production is plummeting, and there are no signs in sight of a trend reversal. The precarious balance conditions in the southeast occur mainly due to the lack of reliable access to imported gas.

It’s actually more risky to depend on a single state firm than on a single neighboring country that delivers gas to Mexican users from different basins, through different gas pipelines and with contractual mechanisms with multiple agents that respond to the legitimate profit interest of monetizing the extraction of hydrocarbons. To stop selling gas to Mexico would be economic nonsense.  More energy security will be secured if open access to the pipeline network is improved, hoarding is avoided in import pipelines, and if more permits are given for foreign trade. Nor is it risky to seek diversification in generation via renewable sources. Intermittency is manageable with technology and agile regulation.

Diversity in sources reduces dependency. Put like this, the combination of imported gas with national sun and wind is less vulnerable and more independent than the current setup. Energy security is a risk management problem. Diversification is the inevitable prescription. If we keep moving away from this, damaging blackouts will become less random, more certain.