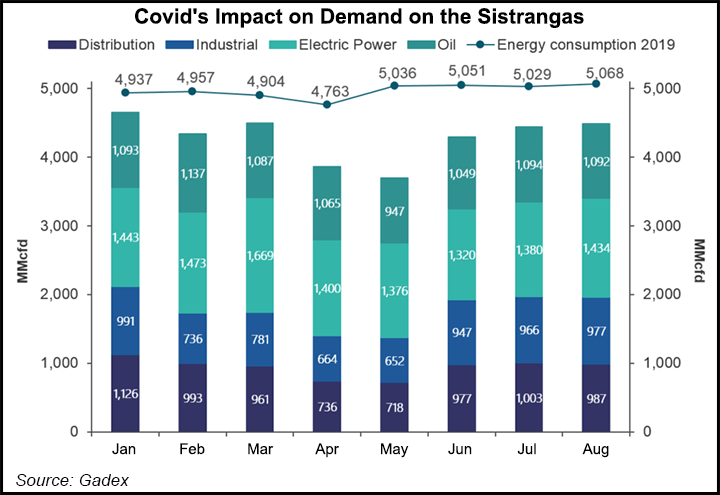 The summer of 2020 is behind us and unsurprisingly it was quite different from previous years. For decades, the Mexican operators of the main energy networks, CENACE (power) and Cenagas (natural gas), were under stress in the summer. Electricity and gas consumption generally peak sometime between June and August, and the risks of critical alerts are accentuated. This year this was not the case.

The entry into operation of the Texas-Tuxpan marine pipeline and the pipelines that form the Wahalajara system have undoubtedly helped relieve gas congestion on the Sistrangas national system, but no one could have expected that the loosening on the Mexican pipeline systems would also come from an unexpected variable: a drop in demand.

The consumption of natural gas on the Sistrangas between February and July 2020 averaged 4.179 Bcf/d, down 778 MMcf/d from the same period in 2019. The greatest decreases occurred in April and May, with a drop of 897 MMcf/d and 1.365 Bcf/d, respectively. This obviously was because of the health crisis that shut down the Mexican economy.

In April and May, the industrial sector saw a reduction of 178 MMcf/d compared to 2019; but actually industrial demand was down even before the emergency of the coronavirus. In February 2020, consumption in commercial nodes associated with industrial users was 740 MMcf/d, when in the previous year demand averaged above 1 Bcf/d. This negative gap in consumption continued until May.

In June, when a relaxation of the quarantine began along with the return of certain essential economic activities, industrial consumption in Guanajuato, Michoacán, Nuevo León, Puebla and San Luis Potosí rebounded to exceed aggregate 2019 consumption. In August, industry demand was 977 MMcf/d, 23 MMcf/d higher than observed in August 2019.

May was the worst month on the Sistrangas in industrial activity. The reduction in consumption in the nodes associated with Ecogas in Chihuahua and the Laguna region, Mexigas in the metropolitan area of Mexico, Naturgy in Mexico City and Bajío, and Engie in Querétaro largely account for the drop of 313 MMcf/d. This decrease can be explained by the decrease in commercial activities and smaller-scale industries that are connected to distribution zones. Although a recovery also occurred in June, demand was still lower than in 2019. The data for August show an aggregate volume that is 127 MMcf/d lower than that of the same month last year. Small-scale commercial activity simply has not yet recovered.

The electricity sector is the most complex in its behavior as a gas consumer. It is a fact that the entry into operation of the marine pipeline caused Sistrangas consumption breaks at the Altamira and Tuxpan plants. However, patterns observed before April suggested a complementarity in the routes rather than gas substitution. In March, despite the fact that gas extractions from the Texas-Tuxpan pipeline reached 150 MMcf/d, electricity sector consumption on the Sistrangas surpassed 2019 levels by a similar volume.

June actually saw the most pronounced reduction in gas demand in the power sector. Gas demand from power plants was off 600 MMcf/d compared to June last year. The reduction in consumption at the Villa de Reyes, Saltillo, Salamanca, San Lorenzo, and Águila de Altamira power plants, along with the Iberdrola plants in Monterrey and Ramos is notable.

Power demand has been lower this year. In 2019, the maximum instantaneous demand on the National Interconnected System occurred just before the middle of the year, and reached 47,001 MW. This year peak demand was on August 27 and was 44,551 MW. Since March 25, the system run by CENACE has been consistently below observed demand in 2019.

It is somewhat intriguing that despite this effect that is clearly attributable to the Covid-19 pandemic, natural gas imports from the United States have been robust and growing. Some analysts have suggested the resilience of imports is explained by the industrial and electrical sectors. This idea has considerable merit, but it is missing a piece of the puzzle. Aggregate gas demand in Mexico is not trending upwards as we saw in recent years. If Mexico is importing more, it is because domestic production is falling. The gas Pemex offers to the market, particularly to the Sistrangas in the southeast, is under 600 MMcf/d. Prior to the quarantine period, Pemex managed to inject around 750 MMcf/d into the Cactus, Nuevo Pemex and La Venta processing plants.

Several observations can be drawn from the above data. The first and most relevant is that the concept of energy security in Mexico’s energy policy should not be seen in terms of “energy sovereignty.” Simply put, the flow of imports from Texas occurred without disruption despite a global pandemic. That’s energy security. North American suppliers honored their contracts and have every economic incentive to place gas in Mexico, just as buyers in Mexico have a need and incentive to buy cheap and reliable gas.

The second observation is that the electricity sector enjoyed better operations during the worst of the coronavirus due to a combination of events. Demand fell significantly, but congestion had already been resolved in a resounding manner. CENACE this year had “generation capacity unavailability” of 415 MW due to a lack of gas, whereas last year that figure exceeded 1,440 MW, which significantly limited reserve margins in the power system. Today the problems in the electricity supply are in the peninsulas, mainly Baja California. Here the new pipelines coming into operation doesn’t matter as Baja is a relatively isolated system from the rest of the large north-south trunk lines. This remains a pending issue in Mexican energy.

The third observation is that gas producers and intermediaries operating north of the Rio Grande can rest easy. Mexico’s fundamentals, even with the greatest economic decline in a century, are of such a nature that its imports grew even as national demand did not. Mexico will be the beneficiary of Texas gas for many years to come. Energy security in Mexico relies on this dynamic. The isolationist rhetoric of the current government will not change this, but it could very well mean that it is achieved without maximum efficiency.