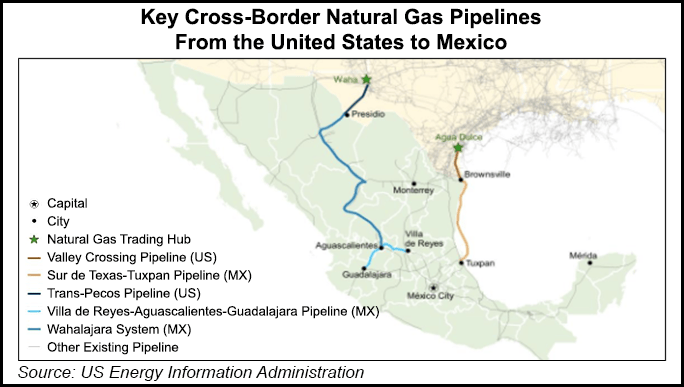 With the start of activity on the Sur de Texas-Tuxpan, La Laguna-Aguascalientes and Villa de Reyes-Aguascalientes-Guadalajara pipelines since December 2018, the government of Mexican President Andrés Manuel López Obrador boasts a natural gas system whose capacity is higher than the country’s gas demand.

Whether it’s through the pipes that the state owns and operates, or those in which state power utility Comisión Federal de Electricidad (CFE) and Sistrangas operator Cenagas hold the “primary” market capacity, state companies exercise strong control in the manner in which gas flows and is distributed throughout the country.

The configuration of most of Mexico’s gas system as of summer 2021 is not due to the production levels of state oil company Petróleos Mexicanos (Pemex). Rather, it is the actions of CFE, the other state energy champion, that determine where and how much gas flows throughout most of the system.

As a result, the efforts of private agents to participate in the market are conditioned on interruptible service on the leftover capacity that CFE decides not to use. This condition eventually will limit even the ability of Cenagas to guarantee the continuity, reliability and efficiency of transport service on the Sistrangas.

These conclusions stem from a comprehensive data review of gas injected into the system. Upon comparing the figures of July 2021 with the same month a year ago, it is clear that domestic production has an increasingly limited area of influence in the integrated system. Combined injections from the Cactus, Nuevo Pemex and La Venta processing centers have fallen from 900 MMcf/d to 695 MMcf/d. It’s true that the amount of gas that the Mayakan pipeline receives from the Pemex processing centers has risen from around 120 MMcf/d to about 170 MMcf/d, but this improvement in supply continuity on the Yucatán Peninsula has more to do with the interconnection of the Sur de Texas-Tuxpan marine pipeline at Montegrande than with any operational improvement by Pemex.

From the perspective of the network managed by Cenagas, the Montegrande interconnection is an externality. Without having made any investment itself, Cenagas can receive and move more gas from the Gulf of Mexico toward the southeast and center of the country. This new injection allows partial remediation of the lack of gas that causes underutilization of firm capacity of 1.57 Bcf/d originating from the gas processing centers in the southeast.

Industrial consumption in Veracruz and in distribution zones in the center of the country are no longer supplied with domestic gas in a physical exchange. The gas that arrives to the country via the marine pipeline supplants part of the firsthand sales volumes that Pemex has committed in an extensive corridor that goes from Coatzacoalcos to Puebla.

In exchange, Mayakan’s nominal capacity of 250 MMcf/d is better utilized with gas that Pemex delivers at the Cactus processing center. Given that CFE is the main shipper on Mayakan and recipient of the gas that Engie SA transports there, it can be affirmed that the systemic benefits of Montegrande are a collateral effect of a solution dedicated to CFE.

Nevertheless, that the marine pipeline has an incremental effect on a section of the Sistrangas does not mean things will happen this way all the time in other zones of the system. The injection along the border with South Texas could be limited or conditioned not only by what enters via Montegrande. The Tamazunchale pipeline operated by TC Energy Corp. causes increased pressure in the zone of Querétero and the Bahío, which merits special attention.

If the gas delivered by TC Energy to the south of Querétaro is not consumed in its entirety by the El Sauz (up to 110 MMcf/d) and Bajío (up to 92 MMcf/d) power plants, an increase in pressure to the south and east of Querétaro city could limit how much gas can flow through the Ramones Phase 2 system, which ends a few kilometers to the west in the locality of Apaseo.

This phenomenon of “substitute flows” can be understood by reviewing the behavior of energy received in the Sistrangas. As flows on the marine pipeline increase, imports via Ramones are lower. The figures of July 2020 and July 2021 show it. A year ago, roughly 2.1 million GJ/y of gas was imported via the Ramones pipeline at the Camargo interconnect, versus 600,000 from the marine pipeline via Montegrande and El Sauz.

While the sum of the volumes that the Sistrangas receives from both systems has not changed dramatically, the changes in the configuration of these injections call for different ways to operate given the alterations in pressure, regional linepack levels and the localization of confluence points.

As a result, we cannot rule out a scenario in which the capacity of Cenagas to simultaneously honor its firm transport capacity commitments is subject to upstream decisions of CFE to transport more or less gas via the marine pipeline.

An analogous situation occurs in the extreme west of the integrated system. There, it is the interconnection of the Fermaca pipelines that have modified the operational philosophy of Cenagas.

For example, this summer about 300 MMcf/d has been injected via the Zapotlanejo and El Castillo pipelines, where the injection a year ago was zero. This incremental volume also affects the Bajío corridor and therefore, limits to a degree the gas that can arrive from Ramones 2. Up until now, the substitution of flows from all these systems has been possible, but its long-term feasibility requires clear rules about which transport section should prevail in a confirmation when you have routes with consecutive sections managed by different operators.

This requires the allocation of firm capacity for routes from Montegrande and El Sauz. Cenagas has not conducted an open season since 2017 to assign new or released capacity, which illustrates the power, by action or omission, that the state agencies of López Obrador have over the development of the gas industry.

Given the current energy policy, it’s easy to project what’s coming. With legal, contractual and political actions on different fronts, CFE has been turned into a strongarm executor of the president’s most fervent nationalist aspirations. Therefore, the immediate decisions around the gas network will be subordinate to strategy of the state-owned company.

It’s very likely the allocation of capacity by Cenagas will be that which gives continuity to the routes that CFE wants to achieve from the capacity it has anchored in the marine pipe and Wahalajara. In the power market, CFE has continued to limit the participation of private agents in the generation segment, and without technical or legal authority, has accused private agents of putting at risk the reliability of the network.

It’s easy to imagine this idea will be extended to the gas network as well to justify discriminatory treatment or at least not entirely open access to the network. The reliability of the electric system, without a regulator that puts the thesis in doubt, will be taken as a pretext to assure the greatest amount of capacity in the Sistrangas segments that receive gas from the network anchored by CFE. The idea of seeking the integration of all pipelines into one system, which was advocated by previous Cenagas director Elvira Daniel, appears to have been left behind. CFE is emerging as the de facto system operator.

The Hydrocarbons Law outlined the stewardship of the state through the figure of the independent operator, an agent that was neither a consumer, producer or marketer of natural gas. This was meant to promote adequate coverage, efficient utilization and open access in order to spread out the risks around supply.

Bit by bit, the role of the independent operator that guarantees non-discriminatory open access will be diluted. While it’s true that Cenagas manages a system of pipes with connectivity to traditional consumption points, the operational philosophy of these has been gradually subordinated to the large volumes transported with capacity anchored by CFE.

In this context, over the next three years, the national gas balance will depend on the transactions that CFE schedules, the commercial agreements that it signs or breaks, and the investment resources it decides to dedicate to reinforcing infrastructure, including on the Sistrangas.

It’s possible that end users will not face any issues in the continuity of service, CFE will make sure of that. But it’s a fact that for their options of gas supply, the user will pay charges that will end up in the hands of CFE or its subsidiaries.