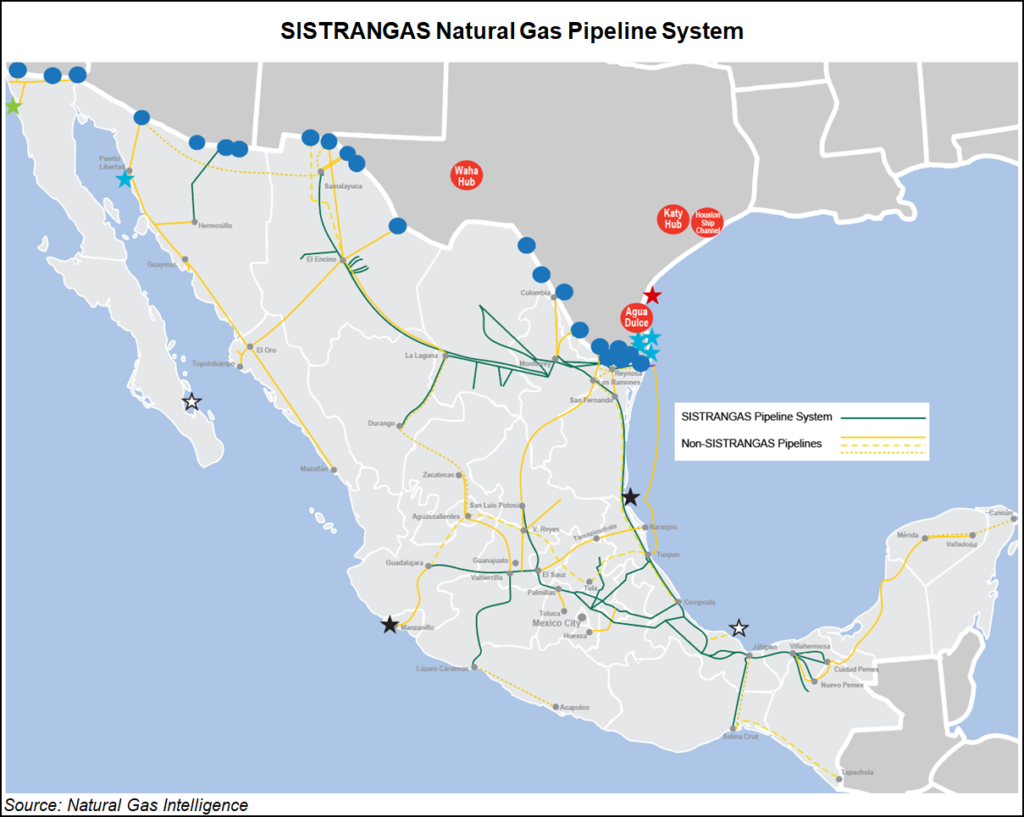 Cenagas, the manager of the integrated gas system, kicked off its annual consulta pública, or public consultation, on Monday June 15 with a series of online presentations and workshops for the natural gas sector. In contrast to what we’ve seen in recent months in other parts of the energy sector, Cenagas seems a model of how to do things right. The fact that Cenagas is still young – in August it will turn six – perhaps allows it to operate without much attention from the public. Cenagas is led by a young director, Elvira Daniel, who has a business mindset. It lacks a big budget, and operates with the resources it obtains from the collection of service fees for the transport of gas on the national system, so it stays out of the way of the public discourse on austerity.

The difference between how Cenagas is being run and how, say, CFE is being run, shows us that there is no single way to measure the energy policy of the government of President López Obrador. Not everything points to a regression, or a structural change. What the Cenagas public consultation shows us is that in certain niches of the government, there is a willingness for collaboration and constructive dialogue with the private sector.

Although this is laudable, it is still a sign that the overall economic environment has turned decidedly sour. In recent weeks, various generation companies that have been impacted by rules that harm the dispatch of clean energy to the grid have started legal proceedings against the Energy Ministry. The outcome is uncertain, but it is very likely that the law will assist investors’ arguments. But investment decisions should be based on the expected profitability of a project, not on expectations of obtaining compensation from the state for damages.

In this context, Cenagas has before it the enormous challenge of converting its announcements into a message of trust in the gas system. The purpose of the Cenagas public consultation is to understand the service needs of its present and future users, and to determine volumes and locations to identify potential expansions of the system. In this year’s edition, there is an effort to spotlight industrial users. As Cenagas sees it, industrialists are an engine of economic development and job creation essential to the growth of Mexico. Through July 19, interested users will be able to submit their needs here. After an analysis process that will take approximately 45 days, Cenagas will make the results public.

From June 15-19, Cenagas presented virtually its strategic, operational and contractual vision for the near future. This vision includes the contracting of operational storage to improve the management of the daily gas balance; the continuity of balancing gas auctions that have reduced the cost of other balancing measures such as the use of liquefied natural gas; the issuance of a new five-year plan; the gradual integration of the unused capacity of independent pipelines to Sistrangas without affecting property or collection rights; and a memorandum of understanding agreed between Enbridge, IEnova and Cenagas to develop the Las Adelitas Hub; a new pipeline that will cross the Isthmus of Tehuantepec; the imminent start of operations of the reconfiguration of the Cempoala compression station; and an agreement with Arcelor Mittal to install a compression station in Pátzcuaro, in the province of Michoacán.

Cenagas also announced a series of measures focused on reviving the market. These include a contract renewal program; a revision of the Terms and Conditions of the capacity management service in Sistrangas and the operating balance rules; and a revision of the program for the regularization of the collection of imbalances. Cenagas also expressed its intention to extend its collaboration with users through investment agreements that allow for improving infrastructure, and updating the electronic bulletin board to make it more accessible to the public. It said it would also automate processes related to the request for services.

Perhaps the biggest news is that Cenagas says it will help support the creation of an electronic secondary market. It is also in favor of new open seasons for new injections, new interconnections, and for the capacity on the independent pipelines to be integrated into Sistrangas. All of this, of course, is consistent with the legal mandate of Cenagas: to be a guarantor of open access, to ensure the continuity of service in the long term and a promoter of the market and competition.

The plans for the Adelitas Hub a few miles south of the Texas border with an international interconnection that will increase cross border capacity by 550 MMcf/d, along with an improvement in compression in the Estación del Caracol, is a great step forward. There is no predetermined anchor customer for this project, as was the case with the pipelines tendered by CFE.

Nor is there an ad hoc secondary market to support the project, nor have we seen a bidding process. What drives the creation of Las Adelitas has to do with improving the system in general and not with a specific user. It is a project that will serve as a lever to finance private infrastructure that will improve connectivity around Monterrey, the corridor that runs from Gasoductos de Tamaulipas to the Cempoala compression station in the Gulf area, and will also fortify system continuity towards the Bajío area. Cenagas will be in charge of balance control and the way in which the new capacity is assigned in the Sistrangas.

With this increase in international capacity, Cenagas seeks to offset the drop in Burgos gas production, allowing for transparent capacity allocation mechanisms on new routes that connect the Agua Dulce area with the markets of northern and central Mexico.

Achieving improved logistics conditions for all users in an open market is an extremely difficult task when international interconnections are involved. Different laws, principles and practices are hard to bring together. But that’s the job of an independent technical manager. Cenagas does not sell gas, like Pemex, nor is it a major consumer, like CFE. Its mandate depends on having, and giving, access to many shippers, connecting the largest number of injection points with extraction points, and increasing its coverage area. This should be duly weighted by agents seeking to participate in the Mexican market through the sale of gas.

As it stands for many shippers out of Waha, commercial intermediation by CFE will undoubtedly occur, which will reduce marketers’ margins and make the invoice that consumers pay more expensive. For this reason, the idea of extending the scope of Cenagas is an idea that should be well received by many market agents. Today a limitation of the Sistrangas is the little amount of Waha gas that it can transport on its pipelines. Perhaps the present consultation and the projects presented can serve as a reference model to build a hub in El Encino that follows the hub at Las Adelitas. Cenagas and CFE need to get together to ponder which model should prevail based on their long-term interests of consolidating a modern transactional market.