Columbia Pipeline Group is holding a nonbinding open season through Sept. 30 for capacity on Columbia Gas Transmission’s (TCO) newly proposed Mountaineer XPress Pipeline Project (MXP), which could carry up to 2.5 Bcf/d of Utica and Marcellus shale gas to the TCO pool and other points. 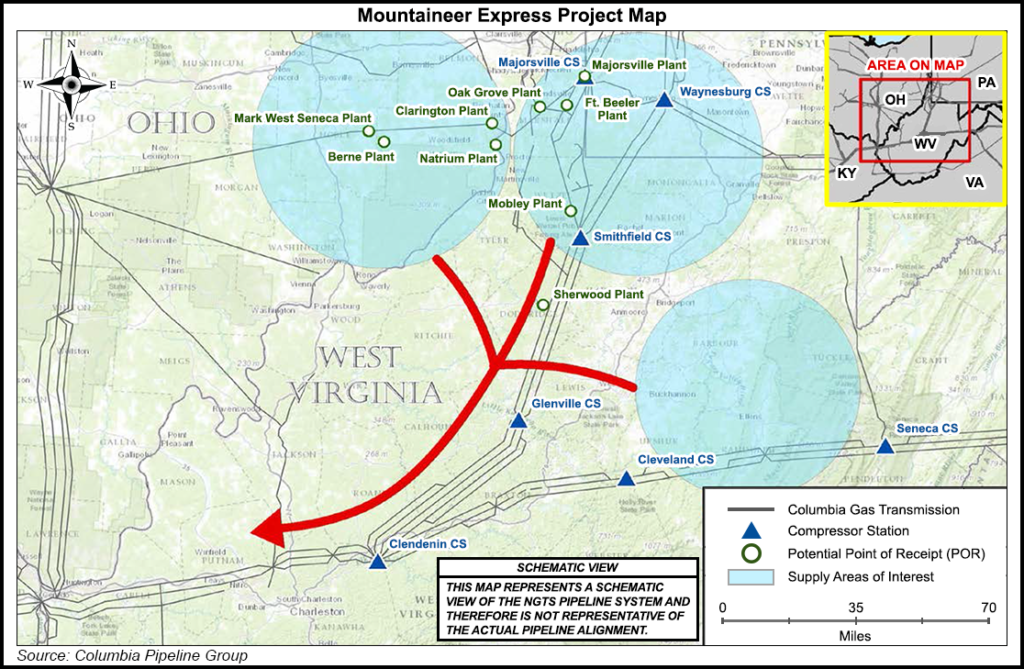 “With the constantly changing dynamics of the shale basin activity, along with the strength and size of the TCO market, TCO will leverage its strategic footprint by designing and constructing another project linking supply to higher value markets,” the company said in the open season announcement Monday.

MXP would provide firm service from major receipt points in Ohio, southwest Pennsylvania and throughout West Virginia to TCO Pool or other mutually agreeable delivery points. Capacity of the project is scalable, ranging from a minimum of 750,000 Dth/d (0.75 Bcf/d) up to 2,500,000 Dth/d (2.5 Bcf/d), with the potential to accommodate more volumes based on location and market support, the pipeline said.

The open season announcement did not provide details on how much new pipeline and other infrastructure would be required, and Columbia officials were not available Monday to talk about the project. The project could be in service during the fourth quarter of 2018 with the potential for some limited interim service as early as 2017.

Potential rates are estimated at 35-45 cents/Dth for primary deliveries to TCO Pool, and nominations directly to TCO Pool would not incur any fuel retainage or commodity charges, the pipeline said. “Actual negotiated rates will be determined upon a final project scope and may vary among shippers, on a not unduly discriminatory basis, including but not limited to such factors as the actual points of receipt and delivery.”

The minimum required contract term is 15 years. Shippers signing up for at least 250,000 Dth/d (0.25 Bcf/d) for at least 15 years would receive anchor shipper status with the potential benefits of contract extension rights, limited proration exposure and favorable cost-sharing terms as well as other perks. TCO said binding precedent agreements are expected to be signed by Nov. 14. Capacity turnbacks by existing shippers that would minimize new facilities construction are invited and due by Sept. 19.

The project joins a number of other intended to get Appalachia gas to higher-price markets, including several that were just announced in recent days.

Dominion, Duke Energy and two utility partners have proposed a 1.5 Bcf/d, 550-mile system that would move Appalachian gas from West Virginia to North Carolina (see Daily GPI, Sept. 2; May 28). Also on deck are plans from EQT Corp. and NextEra Energy Inc. unit NextEra US Gas Assets LLC for their Mountain Valley Pipeline project, which would deliver Marcellus and Utica gas to markets in the Southeast (see Shale Daily, June 12).

Tennessee Gas Pipeline Co. LLC (TGP) has filed an application with FERC to construct its Connecticut Expansion Project, which is designed to provide more gas, including some from the Marcellus Shale, at its northeastern delivery end through upgrades to its existing pipeline system in three states (see Shale Daily, Aug. 15).