Columbia Pipeline Group (CPG) is planning two pipeline projects at a combined cost of $1.75 billion that would carry up to 1.5 Bcf/d of gas from the Marcellus and Utica shales to markets on Columbia Gas Transmission and Columbia Gulf Transmission. 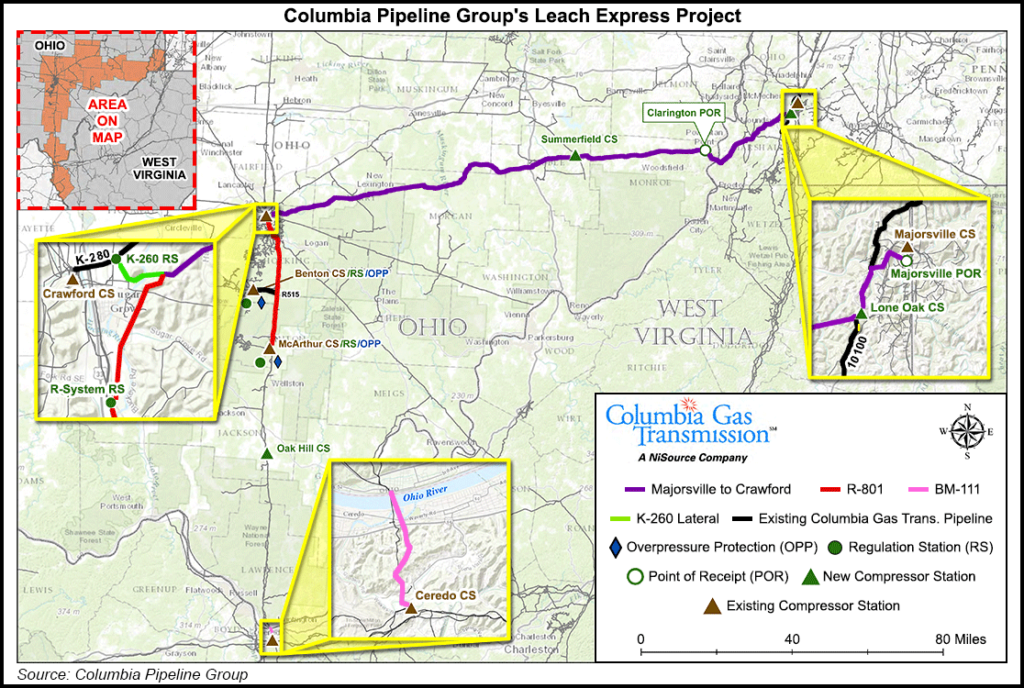 “We have been a part of Ohio and West Virginia for more than 100 years and have an unparalleled footprint in the Marcellus and Utica production areas,” said CPG CEO Glen Kettering. “These newly announced investments reaffirm our commitment to this important region and will increase the capacity and flexibility of the Columbia Transmission and Columbia Gulf systems to further enhance transportation options for producers in Appalachia.

The announcement came a day after ongoing capacity constraints in the Marcellus region rocked next-day natural gas pricing. While most eastern index prices for Tuesday delivery jumped anywhere from a dime to 50 cents higher on Monday, prices plummeted in the Marcellus region as constraints made gas movement difficult, according to NGI’s Daily Gas Price Index (see Daily GPI, Aug. 11). Tennessee Gas Pipeline (TGP) reported no operational capacity available between stations 201 and 204 in southern Ohio and western West Virginia. TGP reported on its website 1,050,000 Dth of operational capacity, but total (over) scheduled capacity of 1,244,233 Dth — in other words, no available capacity.

Prices in the Marcellus reacted quickly. Deliveries to Transco Leidy for Tuesday plummeted 29 cents to average $1.75/MMBtu, but at Tennessee Zone 4 Marcellus next-day gas traded as low as 15 cents/MMBtu before ending the day at an average of 60 cents/MMBtu, or down a whopping $1.37 from the previous day.

One of the two new projects involve Columbia Gas Transmission’s construction of a pipeline in Ohio and West Virginia that would enhance its existing infrastructure and support supply development in western Pennsylvania, northern West Virginia and eastern Ohio.

Columbia Gas Transmission said it has been working with producers to provide new transportation options to move gas out of the capacity-constrained Marcellus/Utica supply basin and into the interstate market. Leach XPress would increase the capacity of Columbia Gas Transmission’s system by 1.5 Bcf/d and move regional gas supplies to various markets, both north and south, including its interconnect with Columbia Gulf in Leach, KY. By connecting production areas to Columbia Transmission’s mainline system delivering to mid-Atlantic markets, the project would allow producers access to high-demand energy markets, CPG said.

The second project announced by CPG Tuesday is supported by long-term firm service agreements with the same four shippers supporting Leach XPress. It would provide additional capability for shippers to transport Appalachian production to markets via Columbia Gulf Transmission, which spans a corridor stretching from the U.S. Gulf Coast to Appalachia.

CPG has begun outreach to landowners and communities in areas where the projects would be constructed. With Federal Energy Regulatory Commission approvals, construction of both projects could begin in fall 2016 for in-service during the second half of 2017.