The newly formed Columbia Pipeline Group Inc (CPGX). continues to push ahead with a $10 billion investment backlog, primarily in the Northeast, where a spate of projects is expected to help triple the size of the company by 2020, management said during its first earnings call since being spun-off by NiSource Inc. in July. 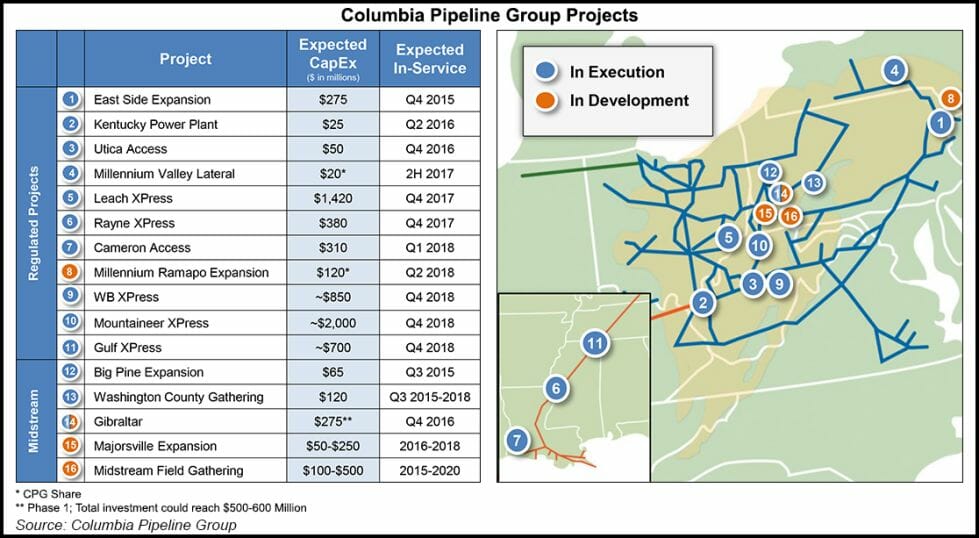 CEO Robert C. Skaggs again touted the company’s “unparalleled strategic footprint in the Marcellus and Utica” shales during the second quarter call on Monday, saying the assets are instrumental to the pure-play natural gas transmission, midstream and storage company’s success following the split with NiSource on July 2, when it began trading on the New York Stock Exchange.

The company has outlined plans for 15 liquified natural gas, midstream and interstate pipeline expansion/newbuild projects that are expected to cost more than $10 billion over the next five years, including part of its Columbia Gas Transmission (TCO) modernization program, which is expected to expand the 12,000 mile interstate pipeline’s capacity over the next 15 years (see Shale Daily, March 4, 2013). In all, CPGX expects to invest $1.2 billion in midstream projects this year alone.

The company’s $275 million, 1 Bcf/d header pipeline system known as Gibraltar is expected to be the first-phase of a larger build-out in Southwest Pennsylvania to serve Utica wells in the region. Ultimately, management said it could spend up to $600 million to serve growing Utica production there.

“That’s going to create a dry gas gathering backbone in this area, extending north of the Majorsville hub; we’ve got solid anchor commitments in place and active discussions with other producers that have acreage in the area,” said President Glen Kettering. “We feel very confident that we will be able to maximize that capacity over the course of the next year or so…We just see kind of a natural build-out and extension of that system over the next two or three years that we believe could generate an investment opportunity in the $5-6 million range.”

The first-phase of Gibraltar is expected to be in-service by late 2016.

“As you know, there’s been some early successes in the Utica area that are really, really encouraging. So a,ll digits crossed that we continue to see that kind of productivity out of that area,” Skaggs said of the opportunities in Southwest Pennsylvania.

“We have officially handed MXP and GXP off to our regulatory and project delivery teams to start working on the FERC filing, public outreach, permitting and ultimately construction,” Kettering said. “Together, these two projects involve an investment of $2.7 billion and will add 2.7 Bcf/d of transportation capacity on [TCO] and nearly 900 MMcf/d on the Columbia Gulf system.”

The company expects to have both projects in service by 4Q2018.

CPGX, meanwhile, reported net income of $60.1 million, compared to the $59.4 million the unit reported under NiSource a year ago. Revenue increased by $20.7 million on higher demand, but that was partially offset by an $18.1 million increase in expenses.