The Colorado Oil and Gas Conservation Commission (COGCC) has completed hearings to address sweeping changes to its mission, from “fostering” to “regulating” the industry. 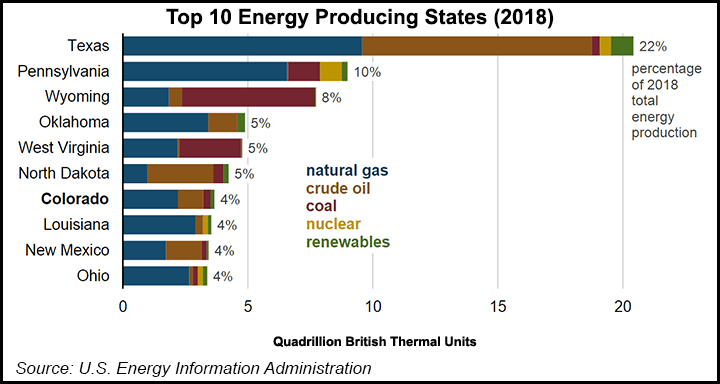 The changes, which among other things also address wildlife mitigation impacts, were required by the state Senate Bill (SB) 19-181 signed into law last year. Hearings began in August to address the latest rulemakings.

The mission change is meant to protect public health, safety, welfare, the environment and wildlife resources.

Department of Natural Resources (DNR) director Dan Gibbs called the changes a “watershed moment in Colorado’s oversight of oil and gas development in our state.”

Gibbs had sponsored state House Bill 2007-1298, which first set out “to find a balance between protecting our wildlife and oil and gas development.” The “new nation leading rules passed…finds the right safeguards for wildlife, our air, water and communities while providing certainty and a streamlined process for oil and gas operators.”

Among other things the rules define the new relationships between state and local government to address cumulative impacts by developing a program with the Colorado Department of Public Health and Environment.

The rules also establish setbacks for location siting purposes, a streamlined permitting process that incentivizes landscape level planning, a reorganization of the rules using updated language to ensure accessibility, enacting a prohibition on routine flaring or venting, and increased protections for wildlife.

The hearings were overseen by the new professional COGCC, also an SB 19-181 component, that was seated July 1 by Gov. Jared Polis.

“The COGCC is committed to conducting rulemakings in a manner that reflects how oil and gas will now be regulated with increased access, transparency, public participation, engagement and information,” said Chair Jeff Robbins.

“Over the past months, the commission took public comment on all the rules, heard testimony from over 90 parties and diverse stakeholders, conducted hundreds of hours of discussion and deliberation during the rulemaking hearings. The rules not only meet the spirit and mandates of SB 19-181, but they were done so with a unanimous vote and largely with consensus from all sides.”

The rules allow “broader access to the COGCC,” and expand standing to allow citizens the ability to participate in hearings, permit applications and requests from operators for rule variances or waivers.

In addition, there are increased protections for public health, safety, welfare, wildlife and environmental resources. The rules incentivize comprehensive landscape-level planning through the permitting process, and they create a “solidified one permit process rather than the current multi-step process.”

Permitting authority has been transferred from administrative approvals by the commission staff to the commissioners through public hearings. The rules also establish regulatory relationships with local governments, which includes COGCC involvement early on in local permitting and siting processes.

The rulemakings also created a first-of-its-kind cumulative impacts data gathering system with an annual reporting requirement to the public for transparency. In addition, protective setbacks for oil and gas development were established for residential building units, schools, and high priority habitat, including riparian areas.

The Colorado Air Quality Control Commission in September unanimously adopted rules to curb local air pollution and greenhouse gas emissions from oil and natural gas operations. The rules require high frequency monitoring for gas leaks during the pre-production phase of wells, representing “the first state regulatory system of its kind in the country.”

“COGCC staff has had the dual job of their day-to-day duties, along with supporting the rulemaking efforts,” said Director Julie Murphy. “The key to our success is linked to our strong relationships and ability to collaborate with all our partners during the rulemaking process to craft the best solutions.

“Now staff will begin the critical work of implementing these rules and we will continue to work collaboratively as this new chapter begins.”

As of Jan. 15, the professional COGCC is to assume responsibility for reviewing and deciding oil and gas permitting and SB 19-181’s objective criteria permitting would cease. The COGCC is in the midst of reviewing rules and procedures to evaluate what changes are required.

The commission plans to take up additional rulemakings at future hearings, including financial assurances around oil and gas development, worker safety, and enacting permit fees.