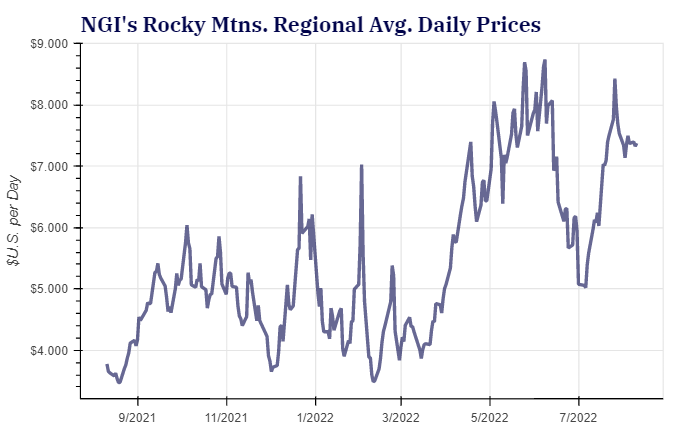 “We beat our internal total production targets and came in under” the company’s capital expenditure (capex) estimate, “and that’s in the face of continuing inflationary pressure,” Civitas CEO Christopher Doyle said on the second-quarter earnings call earlier this month.

“We are seeing the benefits of 18 months of large-scale DJ Basin-focused M&A allowing us to deliver better-than-expected volumes, manage industry-wide cost inflation, and generate significant free cash flow,” he added.

More DJ deals may lie ahead. “We’re in continuous dialogue with multiple folks within the basin,” Doyle said.

Looking ahead, he said production was likely to moderate but at strong levels.

PDC Energy reported production of 235,000 boe/d (75,000 b/d of oil). Total production rose 19% from the prior quarter, driven in large part by its acquisition of Great Western Petroleum LLC.

PDC in May acquired Great Western, a privately held operator focused on Colorado’s Wattenberg field, in a  $1.3 billion cash-and-stock deal. It expects to continue to build on the deal and maintain output momentum.

The company also said it extended its multi-year DJ Basin permit inventory in the quarter with approval of its Kenosha Oil and Gas Development Plan (OGDP) and its Broe OGDP permits, accounting for 99 new wells.

“The company has made tremendous progress obtaining permits in Colorado,” CEO Bart Brookman said on the company’s earning call this month. “I believe our regulatory team has actually cracked the code.”

The company’s Wattenberg team’s schedule is now “mapped for the next four years.”

The outlook for PDC is “incredibly strong. Our capital programs are on track, drilling projects are well mapped for the next several years, delivering substantial returns for our investors,” Brookman added. “Great Western should be fully integrated by mid-third quarter.”

Full-year 2022 capital investments in crude and natural gas properties are expected to be between $1.025 billion and $1.075 billion.