Siding with the oil/natural gas industry, the Colorado Supreme Court on Monday struck down a ban and moratorium on hydraulic fracturing (fracking) by the cities of Longmont and Fort Collins, respectively. The state’s high court affirmed that the local government actions were preempted by state law and therefore were invalid and unenforceable. 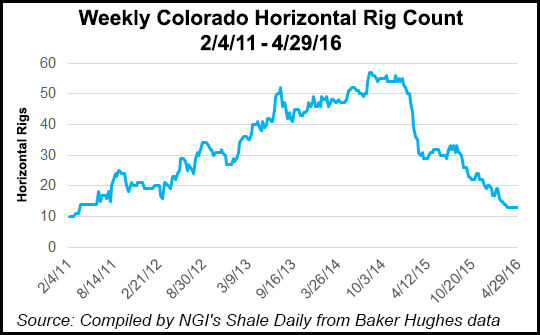 Noting that the court has upheld industry arguments that the local restrictions on fracking are illegal, Dan Haley, CEO of the Colorado Oil and Gas Association (COGA), called the decision a good day for Colorado’s citizens and its economy. “We are excited that the court has come down with a common sense decision based on law and legal precedent.”

In both cases, the state high court affirmed district court orders preventing the local governments from enforcing their respective restrictions on fracking. In 2014, three different district courts in the state struck down local enactments, finding that they were implied to be preempted by the state or that an operational conflict prohibited enforcement of the local law (see Shale Daily, Oct. 1, 2014).

Gov. John Hickenlooper expressed appreciation to the court, saying its rulings strike the “right balance,” and will have “enormous implications” for the Colorado economy. Hickenlooper said his administration “will continue to work creatively and energetically with communities and industry.”

There are still outstanding local restrictions in place against fracking in the city and county of Boulder and Broomfield, but Haley said he hopes the court decision will prompt each of the three entities to voluntarily drop those local ordinances. Last month, Colorado officials cleared supporters of four anti-oil and natural gas statewide initiatives to secure signatures that may qualify them for the November ballot (see Shale Daily, April 14).

“The court decision sends a strong message that bans are not the way we do business in Colorado,” Haley said, adding that “COGA and the industry will continue to work with local governments to find solutions and benefits that are good for their local communities. We’re ready to get back to work with all of the stakeholders who want to find real and workable solutions.”

Haley said the ballot initiatives seeking voter signatures are “headed down a losing path” that could disrupt the state’s economy and “shred the property rights of tens of thousands of Colorado citizens,” but it would be counter to the message in the court ruling.

COGA’s outside attorney in the two court cases, Mark Mathews, with the law firm of Brownstein Hyatt Farber Shreck, said the ruling establishes a “bright line” standard against local governments enacting regulations that conflict in any respect with state laws. “Both decisions hold this [principle],” Mathews said.

Local challenges against fracking and the industry’s response through COGA dates back to 2012 (see Shale Daily, Dec. 20, 2012), and Haley on a news media conference call Monday acknowledged that as a result, operators stopped seeking drilling permits in the local areas involved, but there would be no efforts by COGA to seek financial restitution for whatever alleged opportunities might have been missed.

“I don’t know of any development in Longmont that is imminent right now, but now is probably the time when we need to sit down with the city as stakeholders, oil/gas industry representatives, citizens, and mineral rights owners and really have some good conversations that will develop some trust and find solutions that will work for everyone.,” Haley said.

The COGA attorney Mathews said the state high court decision will “clarify how courts will look at regulations such as Longmont’s.” He emphasized that with the state Supreme Court decisions long trials and analysis “are no longer required,” meaning that the courts will compare state and local regulations and see if there is a conflict. “That’s the end of the court’s analysis.”

Haley said COGA hopes to “re-engage” with Longmont and other local jurisdictions and “move beyond the divisive battles of the past and go forward in a collaborative manner.”

In response to media questions, Mathews said the ruling was strictly a state matter and the cities have no appellate option in the federal court system.