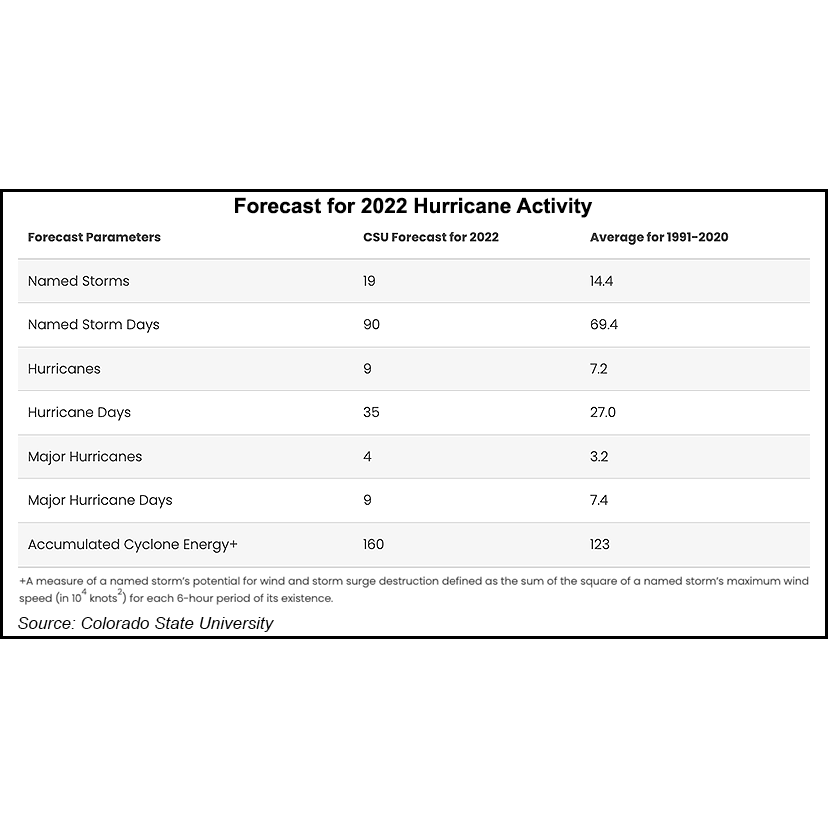 “We anticipate an above-average probability for major hurricanes making landfall along the continental United States coastline and in the Caribbean,” said CSU forecasters Philip Klotzbach and Michael Bell. “As is the case with all hurricane seasons, coastal residents are reminded that it only takes one hurricane making landfall to make it an active season for them. They should prepare the same for every season, regardless of how much activity is predicted.”

The CSU team is forecasting nine hurricanes and 19 named storms in the Atlantic for 2022, compared to averages of 7.4 and 14.4, respectively, for 1991-2020. Researchers expect four major hurricanes for the year, versus an average of 3.2.

The probability for at least one major hurricane, meaning Category 3-5, making landfall somewhere along the continental U.S. coastline is 71%, researchers estimated, versus an average of 52% for the last century.

The probability for the U.S. East Coast including Peninsula Florida is 47%, researchers said, versus an average of 31% for the last century.

The odds of a major hurricane making landfall on the Gulf Coast from the Florida Panhandle westward to Brownsville, TX, is 46%, versus an average for the last century of 30%, forecasters said.

The probability of at least one major hurricane tracking into the Caribbean, meanwhile, is 60%, versus an average of 42% for the last century.

Offshore production from the Gulf of Mexico (GOM) accounted for about 15% of all U.S. oil output and 2% of natural gas production in fiscal year 2020, according to the Bureau of Ocean Energy Management.

The Gulf Coast also is home to most of the country’s refining, petrochemicals and liquefied natural gas export capacity.