Colorado regulators and exploration and production companies (E&P) are working together to advance a new groundwater monitoring program that would monitor data at existing drilling sites and drinking water wells in one of the most heavily drilled areas of the state, Weld County. 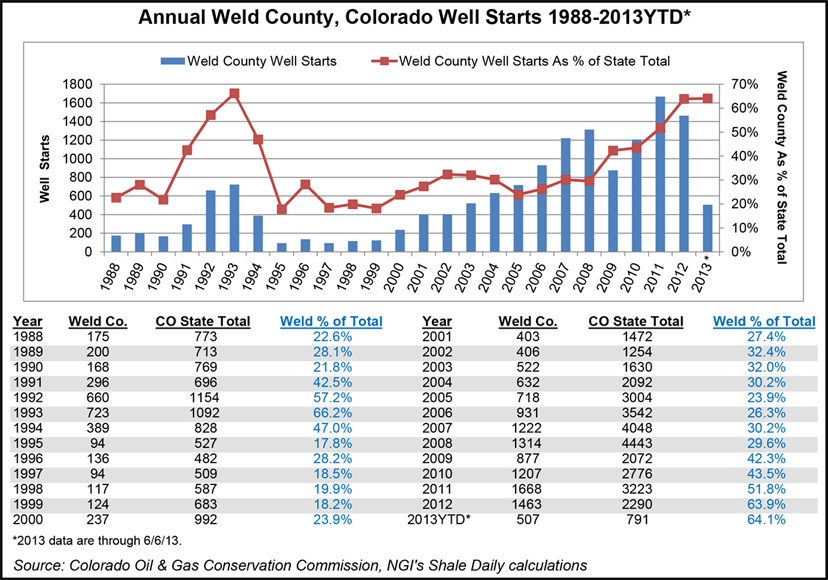 CSU professor Ken Carlson said the focus is on Weld County because of its heavy oil and gas production, which area leaders have had to balance with agriculture. Working with stakeholders, COGA and OGCC, CSU is setting up a network of 15-20 groundwater monitoring sites in the county, all be in close proximity of oil and gas wells, and agricultural water sources.

Weld County is home to the Wattenberg Field, as well as the Niobrara-DJ and Codell formations. For full-year 2012, 1,463 wells were started within the county’s boundary, which was good for 63.9% of all well starts in the state of Colorado that year.

For the demonstration, CSU researchers will use geographic information system, or GIS, optimization tools to overlay existing horizontal wells with permitted or future horizontal wells and the location of groundwater drinking water wells were located to identify high priority areas for the sake of monitoring.

“We wanted to be where people’s drinking water is located and where oil and gas activity is now and in the future,” Carlson told NGI’s Shale Daily. “These are thought to be the areas that have the highest priority for this type of monitoring, and we’re targeting a part of that.” He said they would most likely expand the program in the same manner of first identifying areas where substantial water sources and energy production intersect.

“It will create a system for providing real-time, public-accessible data on water quality and then access whether such a system is worthwhile to both the general public and industry,” Carlson said. The state’s Department of Natural Resources is providing most of the project’s funding, and it is separate from a U.S. Department of Energy (DOE) grant for $1.4 million that he is overseeing to optimize water management associated with Noble Energy Inc.’s operations in Weld County’s Denver-Julesburg (DJ) Basin.

He is mindful that recent studies, including Duke University’s latest Marcellus Shale methane study (see Shale Daily, June 25). However, results from the demonstration sites hopefully can be “educational” for all sides of the debate. The new program would not be “an in-depth water quality analysis,” but rather is to determine if anything changes in the water data from baseline water quality tests to post-drilling testing. “If we do detect a change, it would trigger a team to go out in the field and pull a sample and do an in-depth laboratory analysis.”

Another “important part” of the latest initiative is the fact that Colorado already has some baseline data on water and E&P operations. For any of his proposed new demonstration monitoring sites, researchers may pull baseline data from the OGCC’s five closest past testing sites. Other states, such as neighboring Wyoming, are working to develop baseline data (see Shale Daily, June 24).

Water recycling for drilling operations is another of Carlson’s pursuits. The DOE grant for Noble’s operations involve working with oilfield services operator Halliburton Co. on potential tools that operators could use.

“A lot of the issues [in Colorado] are related to water supply, shortages, truck traffic, and air qulity issues, and water recycling really addresses all of those,” Carlson said. “In addition, I think there is public support for the idea that the industry should be doing more to recycle the water [used in fracking].”