Last year’s 50-year oil production record in Colorado may be broken again this year, according to the latest production statistics from the Colorado Oil and Gas Conservation Commission (OGCC). The statistics cover January through May. 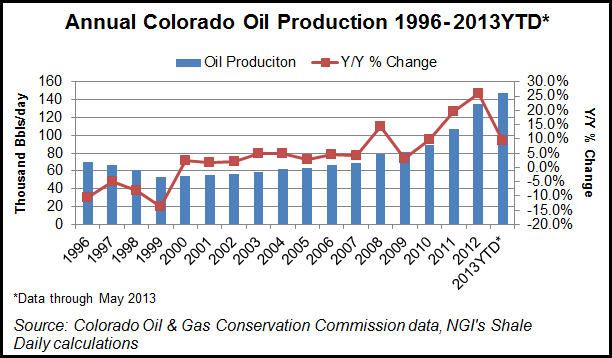 The big production boost is occurring at a time when the state’s drilling permits actually are falling, according to researchers at the University of Colorado (UC), Boulder (see Shale Daily, Aug. 21). From 2010 through 2012, permits issued dropped by 37% (5,996 to about 3,700), but over the same period, production jumped to 48 million bbl from 32 million bbl. Natural gas over the period rose slightly to 1.65 Tcf from 1.62 Tcf.

The all-time Colorado oil production mark was 58.5 million bbl in 1956, according to officials. As documented by UC, the continued robust growth is providing a well-needed boost to the state’s economy.

Anadarko Petroleum Corp. reportedly has 4,000 drilling locations in Colorado from which it intends to drill, particularly in the Greater Wattenberg field (see Shale Daily, May 8). Noble Energy Inc. has indicated it has 9,500 additional drilling locations along Colorado’s northern Front Range, and the company has set its goal at drilling 500 wells annually over the next three to four years (see Shale Daily, Dec. 11, 2012).