While showing a delayed response to the commodity price nosedive, Colorado oil and natural gas production will experience sizable declines this year before stabilizing in 2016, according to a report released by the Leeds School of Business at the University of Colorado (UC). Based on the Moody’s Analytics forecast for WTI crude prices, the report assumes a price “rebound” next year. 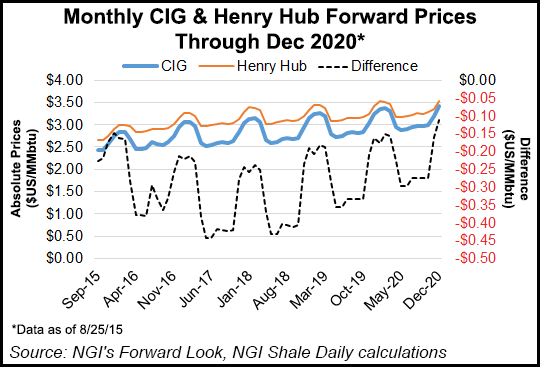 The Leeds School updated its three earlier economic assessments of oil/gas prices in the state done from March 2014 through the first month of 2015. It noted drilling permits and new well starts were down for the first six months this year along with the rig count, which was down 43% year-over-year, following 13 consecutive months of declines in the WTI price.

The UC Boulder business school again assessed data on drilling rigs, production and prices as a means of adding color to the state’s production forecasts, including historic data on individual wells that the state collects. “[This history] not only shows that the depletion curve is steep for both oil and gas production, but that the curve became steeper over the past decade,” the UC researchers said.

Nevertheless, they also said that “while the depletion curve is steeper, the same shale wells are producing more in the first year than wells brought online a decade ago.”

With a drop of prices of about 50% year over year, the UC researchers said the impact is felt all over economically in drilling, tax collection and new permitting revenues. Nevertheless, production had actually increased a little and remained stable until most recently. “Colorado production will soon — if not already — be decreasing.”

The report also highlights the fact that oil and gas production is concentrated in a relatively few counties, with the majority coming from one. For oil, the top producer is Weld County north of Denver, and for gas, it’s Garfield County. Weld accounts for 85% of the state’s current oil production, and Garfield has 31% of the gas production.

The other principal oil-producing counties are Rio Blanco, Garfield, Lincoln and Cheyenne, while the other gas producing ones are Weld, La Plata, Montezuma and Las Animas.

The report used three rig count scenarios and came up with projections for falling future production, flat production and a short-term drop followed by a long-term production increase in Colorado with rig and well numbers rebounding accordingly. For the five-year period 2010-2014, Colorado averaged about 240 new wells/month, the UC report said. Last year, the average was 157 wells/month.

Based on the historical data, Colorado would need about 170 new wells monthly in perpetuity to keep production constant, the report concluded. Thus, Colorado needs a rig count of at least 57 to gain this future production stability with each rig on average producing 2.8 wells/month.

Last year, the state rig count averaged 57, but it has averaged 37 rigs through mid-June, and only 30 since April, the report said.