Colorado community activists and the oil/natural gas industry have smoked the peace pipe and joined hands around the campfire — metaphorically, at least — quieting the high-pitched fights over hydraulic fracturing (fracking) of recent years, an official with the Colorado Oil and Gas Association (COGA) told a regional webinar Thursday in the Pacific Northwest. 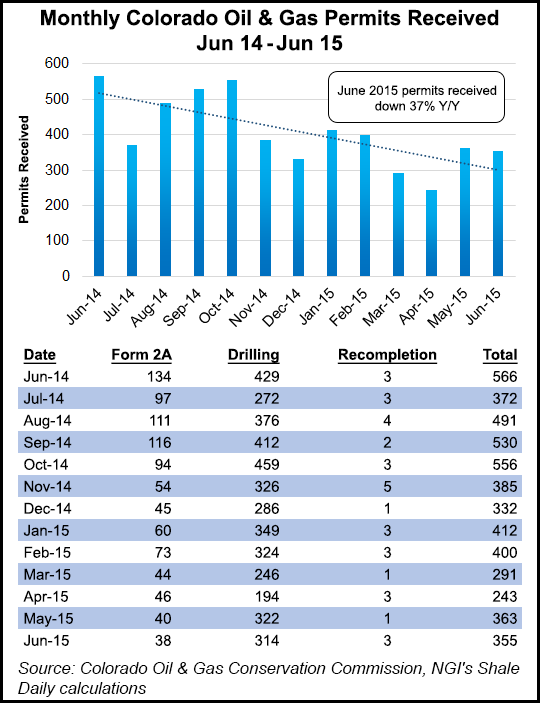 “Not a single local community is fighting for a ban right now,” said Sarah Landry, COGA COO. “People have figured out how the industry works and to be engaged; they are updating their local zoning rules and regulations as they apply.”

Landry also addressed part of the context for the current rapprochement coming at a time when oil/gas activity has dropped off dramatically in the past nine months in Colorado, as it has in other energy-producing states due to the continuing low oil price environment.

The extreme concerns — some driven by national anti-fracking campaigns — have subsided compared to two years ago (see Shale Daily, Nov. 18, 2013). Landry did not speculate on how much, if any, Gov. John Hickenlooper’s oil/gas local control issues statewide task force contributed to the new calm between the industry and local communities (see Shale Daily, Feb. 25).

For the Northwest Gas Association (NWGA) presentation on “Fracking: The Ground Game, The Debate, and Lessons Learned,” Landry said Colorado has learned much from the past community debates, and the state Oil and Gas Conservation Commission (OGCC) has responded in recent years with what she called the nation’s most complete set of oil/gas rules.

There are standards for fracking disclosures; drinking water monitoring, testing and protection; setbacks for drilling; spill response requirements; air emission mitigation and enforcement; and penalties for violators, Landry said, adding that along the way the industry has learned it has to make a connection with people.

“In Colorado, the debate is over, but the dialogue should continue,” she said. “People want facts, and we need to give them that information.”

One of the communications lessons learned, Landry reiterated, was the fact that the general public needs to understand the total oil/gas development process through production, closure and restoration — not just how hydraulic fracturing works and the fact that in Colorado it uses a fraction of a percent (0.09%) of the water consumed in the state, 85% of which goes to agriculture.

Even with today’s depressed commodity prices, Colorado has big oil/gas numbers, Landry pointed out. There are 52,000 active wells in the state, and most recent annual data (2012) showed $1.6 billion in public sector revenue annually from the industry and a $9.3 billion value for the state’s annual production. Oil and gas represents $29 billion of the state’s annual economic output.

She said the industry has no consensus on where oil prices are going, with knowledgeable sources giving predictions as low as $30/bbl and as high as $80/bbl.