Denver-based ARB Midstream LLC plans to build and operate a crude oil transloading terminal in the heart of the Denver-Julesburg (DJ) Basin, it said Wednesday. 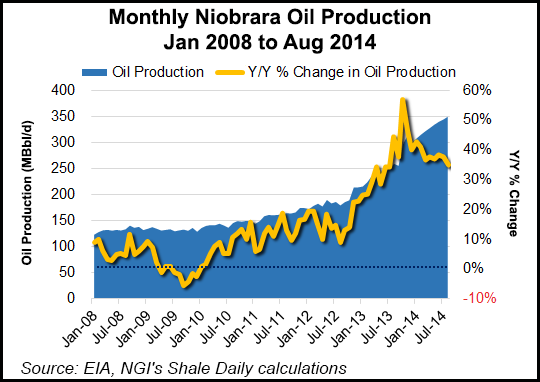 Some operations would begin in the first quarter with full operations beginning in late 3Q2015.

ARB said the facility will be designed to accommodate multiple grades of crude oil typical of DJ Basin production. The initial storage capacity of 200,000 bbl could be doubled to 400,000 bbl later.

NiCon is envisioned as having three rail loops with capacity to handle full 120 tank-car unit trains. The terminal would begin operating with truck deliveries of oil, but longer term, pipeline connections to the terminal would be developed, ARB said.

The facilities would have an initial loading capacity of 79,000 b/d, with initial truck off-loading capability of 35,000 b/d.

“The DJ-Niobrara play provides some of the best economics in North America,” ARB CEO Adam Bedard told an energy forum in Denver earlier this month. “It has seen, and will continue to experience, significant crude oil production growth.”

ARB is forecasting 500,000-700,000 b/d from the DJ Basin in the long term, indicating that production is down in the 200,000-300,000 b/d range. Its estimates include only two counties: Weld and Laramie. Midstream infrastructure will only be adequate for the next year, according to Bedard.

NiCon will be “a world class crude-to-rail facility and one of the first purpose-built crude unit train facilities” in the DJ Basin, said Bedard, who thinks the presence of the new rail loading facility will stimulate drilling and permitting activity, which is centered in a 30-mile radius of the proposed facility.