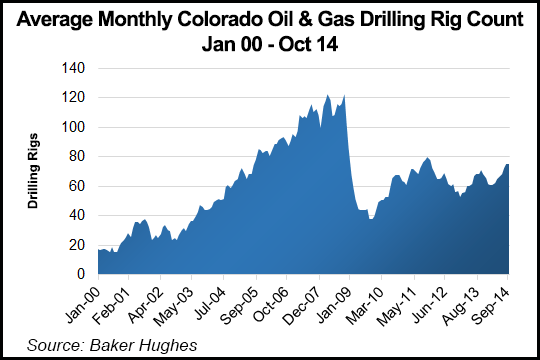 The meeting in Loveland, CO was the third since Gov. John Hickenlooper’s executive order created the task force last summer.

The task force — two co-chairs and 19 other members — were focusing on 10 specific issues in the order (II.C.): setbacks between wells and occupied structures; local laws/regulations that are more or less stringent than the state requirements; adjustments to regulations reflecting population density, geographic diversity and unique conditions; and interaction between landowners (surface owners) energy companies are four that were cited.

Other issues on the list that the task force sought local input on are: restrictions for floodplains, noise, dust/air quality, oil/gas operations, and traffic management, along with the always relevant issues of fees, financial assurances and inspections to implement the oversight and regulation.

In the latest set of meetings, the task force members have indicated they want local perspectives on aspects of state regulation, local government efforts and “gray” areas of uncertainty that are helpful in addressing community concerns, and examples where they are not helpful.

The task force also intends to get surface owners’ perspectives and identify where surface owners now have “leverage” to address their concerns and where they do not. And they want to identify best practices for surface use agreements.

The meetings also were concentrating on internal processes within the voluntary panel. Members were to determine collaboratively how the task force ultimately is going to make decisions. This will be critical in getting consensus with the recommendations the task force is charged with making in February.

A website has been established for the task force (https://dnr.state.co.us/ogtaskforce/) where an audio link to the meetings can be accessed.