Colorado Rising, a coalition of environmental organizations, said a statewide ballot initiative has qualified for the November election, which, if it were to pass, would increase setback requirements to 2,500 feet from 500 feet for new oil and natural gas drilling. 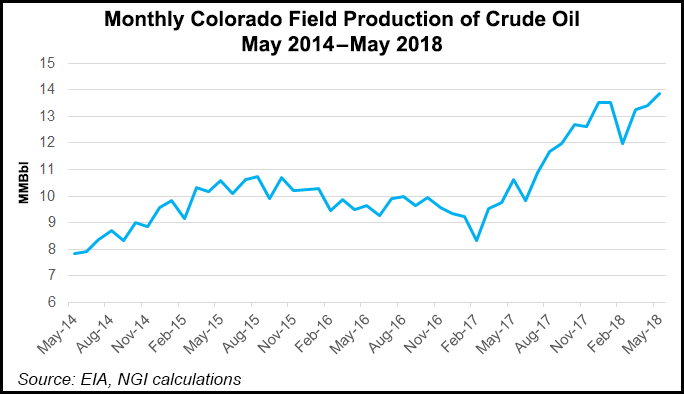 The group submitted the Initiative 97 ballot measure proposal to prevent hydraulic fracturing (fracking) and drilling, known as the “Safer Setbacks from Fracking,” with 171,000 supporting voter signatures, surpassing the qualification for slightly under 100,000 signatures.

Under Initiative 97, oil and gas wells would have to be 2,500 feet from homes, high occupancy structures (now 1,000 feet) and “vulnerable areas.” Two years ago when a similar initiative (78) was proposed, state energy officials said that proposal would make 90% of all surface acreage off limits, but Initiative 97 is considered more onerous.

The Colorado Oil and Gas Conservation Commission has estimated that up to 85% of state land would be off limits to new energy development under the 2,500-foot requirement.

Colorado’s Secretary of State Wayne Williams, who said there are seven ballot proposals to review, including the energy measure, has 30 days to determine which ones will make the ballot.

“It could take a week or two to know what is valid,” said a spokesperson for the Colorado Oil and Gas Association (COGA).

A study funded by Colorado real estate, banking and economic development interests has predicted oil and gas development would be catastrophically crippled if Initiative 97 were to pass.

“Coloradans will know exactly what is at stake: private property rights, more than 100,000 jobs, more than $1 billion in taxes and the U.S. energy security,” said COGA CEO Dan Haley. “These activists are fueled by money from out of state, and Boulder County and they don’t care if they put Colorado families out of work.”

The Colorado Petroleum Council (CPC) also warned of dire consequences if the initiative were to pass.

The pro-industry group Protect Colorado also cited a long list of lost tax revenues, jobs and general economic multipliers if the new setback requirements were to be approved.

Mitigation, however, may be found in a second proposed ballot measure, energy industry-based Initiative 108, which would offer compensation for reducing fair market value by government law or regulation. More than 200,000 supporting signatures have been gathered for the initiative, which deals with protecting private property rights and allowing oil and gas operators to sue if government actions devalue their property.

Colorado allows citizens to put issues on the ballot after going through a process that includes reviews by staffers in by the state, attorney general and legislative legal services offices.